The mall’s sales have rebounded nicely from the pandemic, although it has been hampered by Apple, one of its largest and most lucrative inline tenants 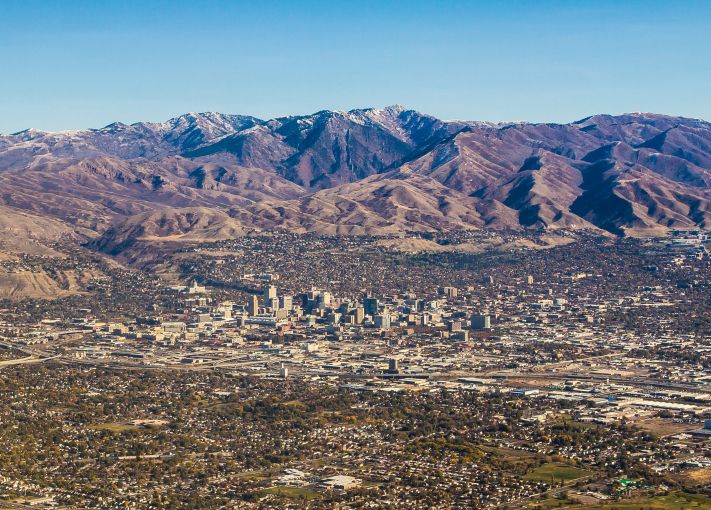 An aerial view of Salt Lake City and some of its surrounding areas. Photo: Getty Images

Brookfield Property REIT and the Teacher Retirement System of Texas (TRST), the state’s largest public pension system, have financed a portion of a 1 million-square-foot mall in Utah with a $290 million commercial mortgage-backed securities (CMBS) loan, according to information from Moody’s Investors Service.

The three-year, first-lien mortgage loan refinanced existing debt on Brookfield and TRST’s Fashion Place shopping center in Murray, Utah. The floating-rate and interest-only loan was originated and sold by Barclays and Morgan Stanley, and it includes two one-year extension options, per Moody’s.

The financing retires about $226.7 million in existing debt on the mall and returned about $58.4 million of equity sponsors, according to Moody’s. The debt is set to be securitized in the BFLD 2021-FPM single-asset, single-borrower CMBS deal.

According to Moody’s, the mortgage was made to cover a roughly 632,250-square-foot portion of the large super-regional mall at 6191 South State Street in Murray, a Salt Lake City suburb located about 11 miles south of the city.

Fashion Place is an attractive commercial outpost for Salt Lake City — the third-largest mall in the metro area — that serves as a suburban retail epicenter in Murray. It benefits from being surrounded by nearby, competing retailers and shopping plazas that add to the draw of the mall itself. The mall’s primary “trade area” covers a seven-mile radius and includes a population of more than 681,800 people and an average household income of almost $91,000, per Moody’s.

It sports 20 food and beverage outlets and a tenant roster full of marquee names. It’s anchored by a Macy’s, a Dillard’s and a Nordstrom, although the latter two are non-collateral tenants in this financing. Premier names like Apple, Peloton, Zara, H&M, Sephora, Urban Outfitters, Banana Republic and Crate & Barrel, among others, also call the mall home. Some of the restaurants on-site include Cheesecake Factory, California Pizza Kitchen, Shake Shack and Chick-fil-A.

Fashion Place closed on March 25, 2020, due to a state-mandated, stay-at-home order and reopened a little over a month later on May 5.

The pandemic obviously bruised the mall and its sales figures in 2020, but it has rebounded nicely. Strangely, a comeback in sales volume has been driven down by Apple and the pandemic protocols that the tech giant instituted at its retail locations.

In 2019, Apple was far and away the mall’s most lucrative inline tenant, exhibiting about $12,594 in sales per square foot. It’s “strict social-distancing protocols” at its retail locations in 2020, which limited staff and included reduced capacities and appointment-only services, among others, have “negatively affected sales at the [mall].”

In early 2019, Brookfield was looking at redevelopment opportunities within its retail portfolio — mostly focused on the properties it acquired in its 2018 purchase of mall operator General Growth Properties. At the time, Fashion Place had been going through waves of renovations, and more were planned.

About $73.5 million has been pumped into renovating the mall since 2013, with a lot of work happening from 2013 to 2017. In that time, new retail outpost was developed for The Container Store, which is now one of Fashion Place’s top inline tenants; Dillard’s and Macy’s spaces were expanded; and 50,000 square feet of new inline space was added by building a structure that actually connected the Macy’s to the broader mall.

By the end of 2018, TRST was primed to deploy more money into real estate. And, in the first quarter of 2019, Sandeep Mathrani, then-CEO of Brookfield Property Partners’ retail group, who is now CEO of WeWork — mentioned in an earnings call that the firm’s $594 million sale of a 49 percent interest in the mall to TRST illustrated “active demand” for prime retail assets.

That year, Brookfield redeveloped two outparcel pads that used to house an Applebee’s and a Taco Bell in order to bring in a new Shake Shack last October. Brookfield and TRST are looking to spend $3.4 million this year to tear down another outparcel that used to be occupied by a Morgan Jewelers to redevelop it for two new restaurants, Via 313 and The Crack Shack, per Moody’s. Both restaurants have signed leases that start next year.