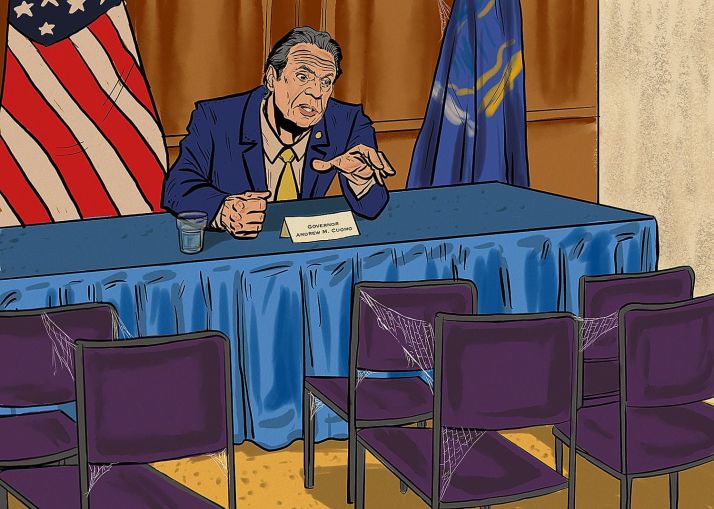 It was sort of a given that, on every Power 100, the governor and the mayor of New York would have a place on the list.

Makes sense. They’re plenty powerful. They allocate the resources and set the policies that can make or break a developer, a landlord, a neighborhood, a business.

Moreover, given the effusive feelings that Gov. Cuomo and Mayor de Blasio have for each other (NOT!!), we like to rib these two even-keeled men (DOUBLE NOT!!!) by delineating whose political capital was high, and whose was low.

Despite an ambitious affordable housing plan, a $100 billion budget (the largest municipal one in the U.S.) and the progressive wind seemingly at his back, with one or two exceptions, we ranked de Blasio lower than Cuomo in the pecking order. But, even with that distinction, Cuomo moved up several levels last year.

With his daily news conferences, where he doled out reassurances in a time when New Yorkers (and the rest of the country) dearly needed it, and with a Robert Moses-level of ambition for infrastructure for the Empire State, Cuomo catapulted to the very top of the Power 100. Number one. He was America’s governor. And that might not be all — there was even talk that Joe Biden would step aside and allow this pugilist to take his gloves to then-President Trump.

How the mighty have fallen.

Of course, governor of the State of New York is an extremely powerful position, but with the scandals that have been eclipsing his administration, no one is arguing that Andrew Cuomo’s political star has risen any further. Last spring probably represents a career peak, in fact.

The governor is being investigated for covering up the number of deaths in nursing homes during the pandemic, and has been accused of sexual harassment by multiple women. Prominent politicians in his own party have called on him to resign. The state GOP has called for his impeachment. It’s difficult to imagine a fourth run in 2022, or a national political run for Cuomo anymore. (But, who knows. Cuomo has made a career of ignoring critics, plowing through adversaries, and advancing.)

However, with his second term coming to an end this year, Bill de Blasio might be an even bigger lame duck than his political nemesis.

The jockeying for who gets to move into Gracie Mansion on Jan. 1 has been intense. The candidates have been proffering bold (and not so bold) housing, zoning and real estate proposals (see story on page 128) — and whoever wins will almost certainly have a cozy spot on the 2022 Power 100 as they set their new agenda. But, as for the current mayor, we wonder what he will realistically accomplish in his final seven months.

This is not to say we give Cuomo and de Blasio no credit. They were both, in their way, visionaries. And powerful. They wielded power well sometimes — not so well other times. But the next governor or mayor who appears on Power 100 will not be Andrew Cuomo or Bill de Blasio.