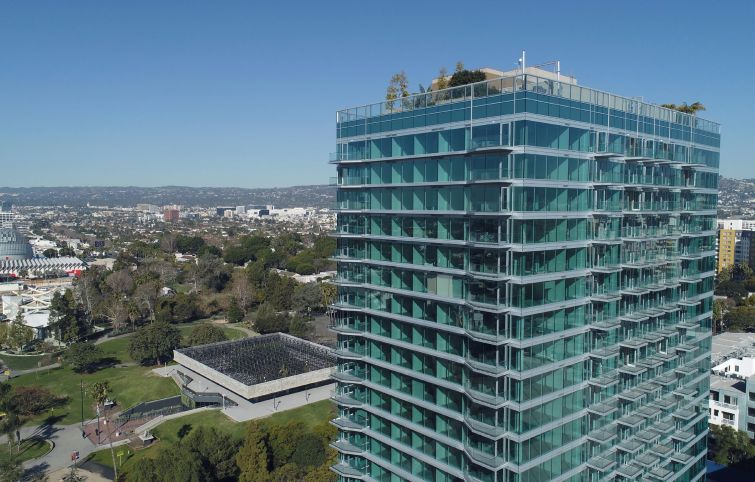 Deal parties declined to identify the lender, but sources familiar with the transaction confirmed that KKR provided the loan, which features full-term, interest-only payments and a rate in the mid-3 percent range. It retires construction debt on the property, provided by Pacific Western Bank — then known as CapitalSource — in July 2018. The construction financing was arranged by the same Meridian team.

One Museum Square is a luxury rental building located at 640 South Curson Avenue, in the heart of L.A.’s Miracle Mile District. Its 285 units span 21 floors and sit atop a subterranean parking garage. Apartments feature floor-to-ceiling windows and private balconies with views of the city, the hills or the ocean. Building amenities include a 24-hour luxury fitness center, a rooftop pool with 360-degree views, a luxury conference area, a sky lounge with fire pits and a clubhouse. Residents also have direct access to the adjacent SAG-AFTRA building, which counts Starbucks, burger chain The Counter, and salad chain MIXT among its ground-floor retail tenants.

Competition for the loan was fierce, despite the fact that the property had not yet received its temporary certificate of occupancy (TCO), had no pre-leasing in place, and its construction wasn’t yet complete.

“Of all the legacy assets the J.H. Snyder Company has built, One Museum Square is the most pristine,” Lon Snyder, partner of J.H. Snyder, said. “We are so proud of our entire team and grateful for their many years of planning, hard work and effort to see this through. When Meridian proposed executing our refinance with a 10-year interest-only loan without any pre-leasing, no TCO, and construction draws remaining, it was unheard of. Doing so in under six weeks, from the time we signed an application through closing, is simply amazing.”

“The J.H. Snyder Company has been one of the most highly regarded developers in Los Angeles for over half a century,” Grossman said. “The quality of One Museum Square, and debt execution it has received, are testaments to this. Lender reception to their projects has consistently been outstanding during our years working together. Notwithstanding, the response to this asset stands above all the rest.”

Known as America’s Champs-Élysées, Miracle Mile has a rich, embedded cultural history and remains one of L.A.’s most desirable neighborhoods. In addition to the SAG-AFTRA building, landmarks include The Los Angeles County Museum of Art, the El Rey Theatre and the Petersen Automotive Museum.

KKR officials declined to comment. “It is a very unique opportunity in that One Museum Square is sitting perpendicular to the axis of the La Brea Tar Pits, which is like the Central Park of Los Angeles,” Carl McLarand, chairman and CEO at MVE, said. “By its very nature it will be iconic. There are a number of unique features in this building like the predominance of glass and the views that are unlike any other.”