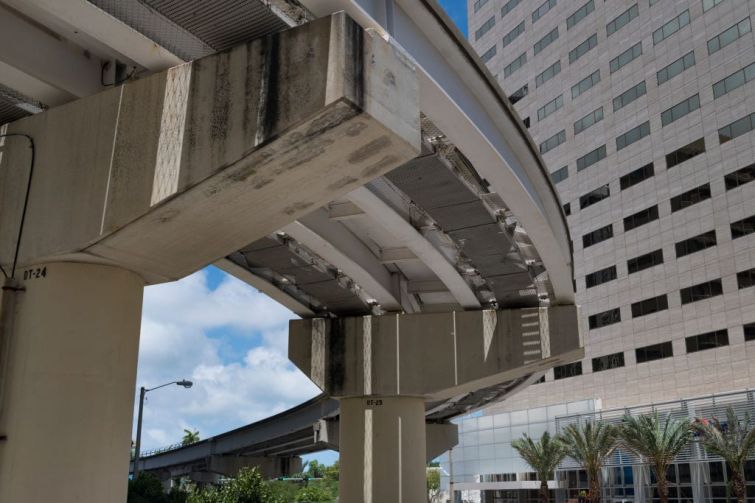 View from below of the Miami Metrorail platform. Photo: Getty Images.

As President Biden’s infrastructure bill begins its journey through Washington’s sausage-making machinery, and its champions and naysayers have their say, infrastructure planners and local politicians in South Florida are compiling their wish list of projects that could use a little help from Uncle Sam.

One of the actors who looks forward to playing a role as an advocate for these projects is Albert Dotson, a Miami attorney who leads law firm Bilzin Sumberg’s government contracts and public-private partnerships practice. Dotson and his team have been involved in some of South Florida’s most important infrastructure projects totaling billions of dollars over the past five years, including the Brightline rail system and the Beach Connector connecting Miami to Miami Beach.

Now, Dotson looks forward to the passage of Biden’s $2 trillion American Jobs Plan, which, if passed, will provide billions of dollars of infrastructure projects that will benefit South Florida.

“I believe Biden’s plan has about $50 billion for the improvement of Florida’s infrastructure,” he said. “The specifics as to how the funds will be spent will be fleshed out as we go through the legislative process.”

A number of factors bode well for Florida getting a significant portion of the infrastructure money once a bill is passed, said Dotson. The state is experiencing growing popularity, especially South Florida, and, as more people and businesses move to the area, there will be more of a need to address infrastructure issues, he said.

“The other reason why I think that we will continue to be an area of focus is there is a lot of natural beauty from the Everglades to [Biscayne] Bay that are federally protected properties,” Dotson said. The Everglades is part of the area’s hydrological system and, therefore, needs protection.

In South Florida, there is a great need for better public transportation, said Dotson, but there’s a need to mitigate the cost to any one community. Public-private partnerships need to be brought to the table as well as the federal government to lessen the burden on local taxpayers, he said.

“The great news is that, as we speak, Miami-Dade County has selected a consortium to finance an extension of the MetroRail, a heavy rail rapid-transit system in Miami and Miami-Dade County, that will run north to the Broward County Line,” said Dotson. This project, which will serve everyday Floridians, has been in the works for decades, but it is finally moving forward now, he said.

Until now, said Dotson, the only extension for MetroRail was built to take passengers to the airport.

“But to build the northwest extension — which will run up 27th Avenue north to the Broward County line — the county is seeking federal funds. Plus, another local commuter rail in the northeast corridor of the county, close to the ocean, is also in the planning stage.”

Additionally, Miami-Dade County is trying to establish an express bus line from Dadeland, which is 16 miles south of Downtown Miami, to Homestead, which is in far south Miami-Dade.

It is too early to tell how much the county will need to complete these projects, or how much it will need from the federal government, said Dotson.  There needs to be due diligence to confirm a budget, and there is as yet no deadline that has been set.

To get these projects underway, said Dotson, the county, state and federal government, as well as the private sector need to play a role. As for Congress’s role in South Florida’s transportation future, Dotson acknowledges that passing the infrastructure bill will not be easy, especially with Republican opposition to the plan as it currently stands.

CORRECTION: This story has been corrected to reflect that Dotson’s team is working on the Beach Connector project, not the Baylink Monorail as previously stated.