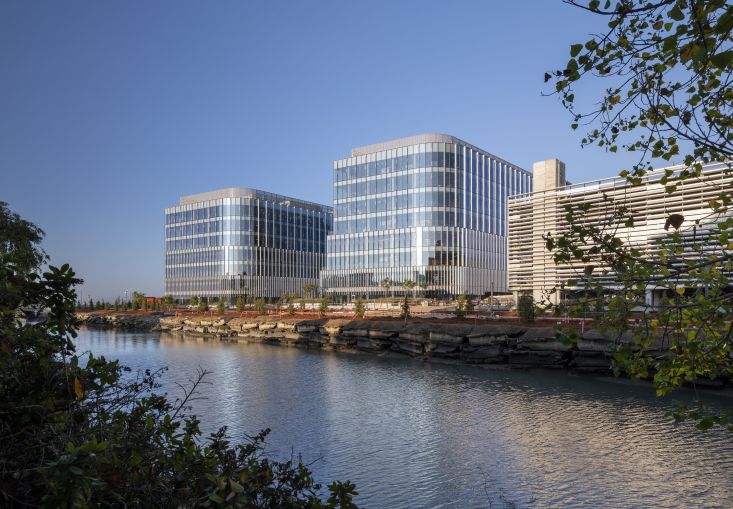 The 18.13-acre campus is fully leased to Facebook subsidiary Oculus.

“We are proud to have delivered this outstanding project during such unprecedented times and we look forward to seeing Burlingame Point fully activated,” said Ou Sun, CEO of Kylli.

“Kylli developed a world-class office campus, the quality of which resulted in a highly attractive leasing and financing execution,” Kohn said.

CO first reported back in October that Kylli, a subsidiary of Shenzen, China-based developer Genzon Investment Group, was seeking a $750 million refinance for the asset.

Kylli had initially built the project on spec, designing it in a campus style on the waterfront with two true office buildings, plus two buildings originally intended for life science use. Shortly after construction began, Facebook came along and decided to take the campus in its entirety, inking a 12.5-year lease for the space in 2018. At the time, the deal was touted as one of the San Francisco Peninsula’s largest-ever leases.

The lease commenced on August 1, 2020. By October, when the debt was first sought, the social media giant had taken possession of the property and was busy building out its space.

C&W officials declined to comment on any details surrounding the Facebook lease, but speaking generally, Moyer stated that: “Strong tenancy paired with favorable capital markets conditions allowed for favorable long-term capital for Kylli. The return-to-work tailwinds alleviated any lender concerns around the pandemic.”

The new financing retires a $515 million construction loan, provided by JPMorgan Chase and Starwood Property Trust in April 2019, and also arranged by the C&W team. In October, sources told CO that additional proceeds from the $750 million sought would be used in part to address the free rent associated with the Facebook lease, and to deleverage some of Kylli’s other Bay Area assets.

At the time, one interested lender was feeling the heat of competition for the trophy asset, telling CO: “This is Facebook, and a 12-year lease. There’s a ton of interest [in the loan opportunity].”

The campus was a perfect fit for Oculus, due to Burlingame’s location between Downtown San Francisco and Palo Alto, as the company has employees living in both locations, sources said. It’s also within miles of Silicon Valley technology, Bay Area life science research, and the world’s greatest collection of venture capital fund managers.

Kylli is an investment firm focused on the development and operation of San Francisco Bay-area real estate assets. It has more than $2 billion of assets under management, including 225 Bush Street in Downtown San Francisco and the Mission Point project in Santa Clara, a former Yahoo campus and future mixed-use community.