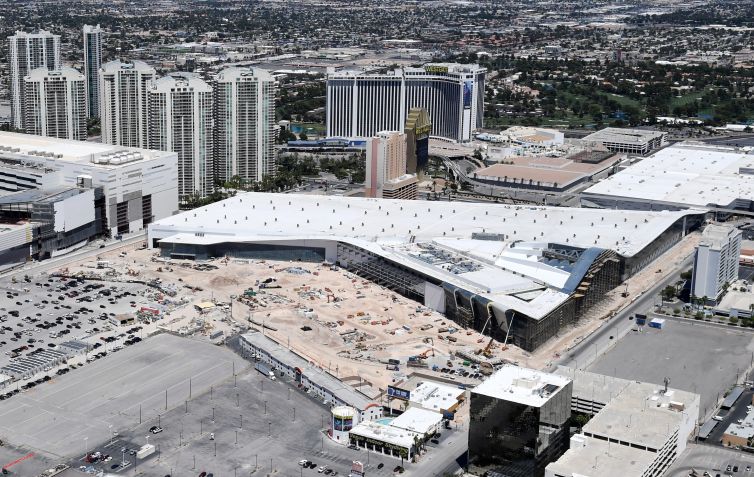 The Las Vegas Convention Center in May 2020. Like much of the nation’s industry that services trade shows and conferences, it has been operating at severely reduced capacity since early last year due to the coronavirus pandemic. acoen

Hotels reliant on convention center business face a larger uphill climb returning to pre-pandemic levels than other business hotels, as businesses and other organizations slowly work their way back toward embracing traveling to large gatherings.

Conventions and in-person conferences have been largely sidelined since the onset of the COVID-19 pandemic in March 2020 due to health concerns. While the rollout of vaccines early this year provides hope that many conferences and trade shows will return before the end of 2021, hospitality industry experts don’t expect hotels centered around convention halls to return to their pre-pandemic volumes in markets like Las Vegas for at least another three years.

“Conventions are starting to come back, but it has certainly been a dry time over the past year,” said Stowe Shoemaker, dean of the William F. Harrah College of Hospitality at the University of Nevada-Las Vegas. “Las Vegas convention business will bounce back, but it will take time as the country gets vaccinated and people get to feel more comfortable traveling again.”

The latest capacity allowance for events in Las Vegas laid out by the State of Nevada in mid-March caps attendance at either 50 percent, or 250 people, whichever amount is less.

Erica Johnson, an LVCVA spokeswoman, said the Las Vegas Convention Center has roughly 30 events on the books for the remainder of 2021, with 2022 filling in more firmly. The venue has two smaller shows planned for late April and May, before hosting the Informa Markets’ World of Concrete convention for the commercial construction industry from June 8 to 10. It will mark the first major citywide show in Las Vegas and the first major trade show in the U.S. since the pandemic began.

Suraj Desai, senior managing director at Black Bear Capital Partners, noted that the advanced booking time needed to host large conferences and trade shows means that convention center-oriented hotels will likely not see a full recovery until 2024. Desai said that convention center hotels would most likely be the last sector of the lodging industry to bounce back, given the reluctance to be in crowded indoor spaces.

“For convention centers to have fluid business year-round, we would have to be at the other side of the pandemic, because even when these conferences start to get booked up, it will be a reasonable amount of time before they are booked up for an entire year’s worth of events,” said Desai, who specializes in hotel financing. “We anticipate that conference centers and convention centers will have some improvement in 2022, but [will]  also be affected by COVID, even in 2023, because of the advanced booking that they need to do to book a major event.”

While many industries are pressing ahead with conferences this year, attendance nationally is forecasted to be only around half-capacity. Desai said hotels most negatively affected by lost convention revenue have tried to weather the storm by cutting down operations, with federal stimulus funding providing a key buffer. He said more aid from Washington will be necessary, given the amount of time convention center hotels need to ramp up post-COVID.

Companies cutting back on travel expenses, coupled with consumer apprehension to take planes since the onset of COVID, are also driving headwinds for the convention center industry. Air travel dips, which could linger even post-vaccine, would especially hurt convention center markets like Las Vegas and Phoenix, where driving is less of an option for potential attendees on the denser East Coast.

Conventions nationally would likely be held in the second half of 2021, since often these events are booked up to seven to 10 months in advance. In terms of new conventions, hotel operators are extending their booking windows and are at around 80 to 90 percent of 2019 levels, according to Fitch Ratings analyst William Kuo, who covers U.S. real estate and leisure.

Despite having a bullish long-term outlook, things are going to be more iffy for convention hotels in the short term. Fitch is forecasting that it will take until 2025 for a full recovery. Kuo said late 2021 and into early 2022 will be a more “recession-style environment” for convention center hotels, with volume levels off around 20 percent from pre-pandemic, compared to around 50 percent lower than they are at now. He noted that it typically takes a few years for the hotel sector to recover from a recession, but stressed that the economy’s growth could accelerate the rebound.

“There is reason to think it could come back faster and stronger, but we’re taking the conservative view,” Kuo said.

Convention center markets like Miami and Phoenix have held up “relatively well” the past few months with hotel volume, according to Kuo, helped largely by attracting drive-to leisure business to offset some of the losses from the lack of the usual conferences. These cities have also been aided by many remote workers from colder areas setting up shop in warmer climates during the winter months.

Kuo noted that Las Vegas has suffered more of a hit, due to a heavy reliance on international travel and domestic flights. The city has received business from people driving from nearby California, but has not seen the usual tourist volume from the East Coast.

Convention center hotels face an added challenge via technology, too. The likes of Zoom make participating in conferences virtually that much easier, and lessen the need for in-person meet-and-greets. Companies would likely need to offer discounts over the next year in order to lure people to large physical settings while concerns about the virus persist, even with extra safety features already installed, such as more hand sanitizers, automatic paper towel dispensers and air filtration systems.

“Until Las Vegas, which is wildly dependent on convention business, can fill convention centers and not be stuck at 50 percent capacity, you don’t have a viable industry, because they need that 10,000 to 12,000 conventioneers for one event to fill beds for three, four, five days a week,” Barry LePatner, founding partner of LePatner & Associates, who has studied the construction industry, said. “That is holding everyone back.”

He noted that many hotels have been relying on funds from the federal Payment Protection Program during the past year to scrape by.