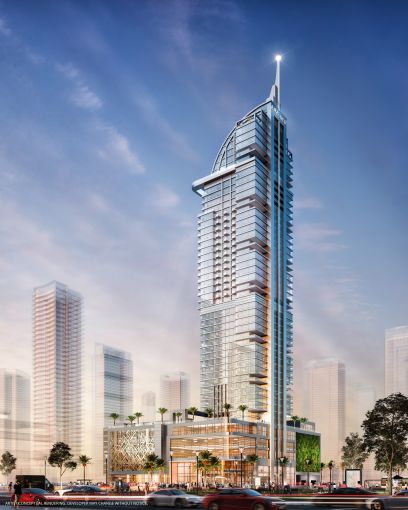 Accor will manage and operate the building under the purview of Morgans Originals, the firm’s newest lifestyle brand, according to information from RPC and Accor. The partnership is the latest addition to Accor’s growing Miami portfolio, which includes the Delano, Mondrian, and Shore Club hotels, and the SLS chain.

Located at 1010 NE 2nd Avenue, the Legacy tower will comprise 310 private residences, a 219-room hotel, and ground-floor retail, which has yet to be filled. Amenities will include an eight-floor wellness and medical center, a pool deck spanning an acre, and a seven-floor rooftop atrium with a restaurant and bar.

Construction of the tower, which RPC is heading, is expected to begin this year. Pre-leasing commenced back in January with brokerage OneWorld Properties. Once completed, Accor will manage the building, said an RPC spokesperson, who declined to disclose the financial details of the deal.

The ambitious, $4 billion Miami Worldcenter is slowly taking shape. The project is one of the largest urban developments in the U.S., second only to Hudson Yards in New York. While much of the site remains under construction, RPC’s Kodsi developed one of the two completed structures at Worldcenter: the 60-story Paramount Miami Worldcenter condominium.

Last week, Abbhi Capital bought its second development parcel at the site and plans on erecting a building with hotel, condos, retail, and office space.

Accor has expanded in the Miami area via its November 2020 acquisition of sbe, which had previously taken over the assets of the Ian Schrager-founded Morgans Hotel Group.