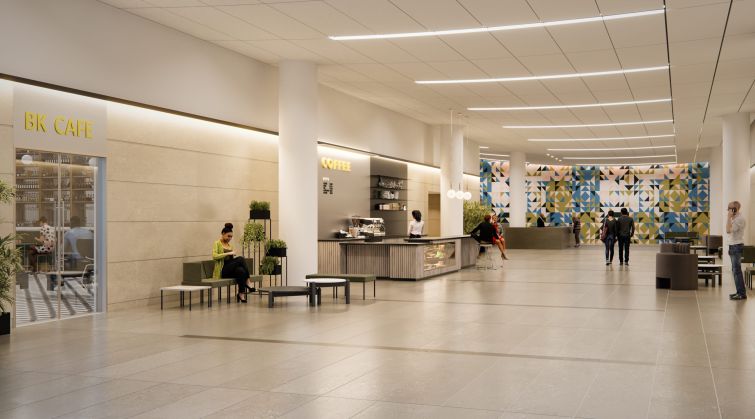 Brookfield is starting to upgrade 15 MetroTech, which was built in 1992 as part of Forest City Ratner’s larger MetroTech office complex in Downtown Brooklyn. Image: STUDIOS Architecture 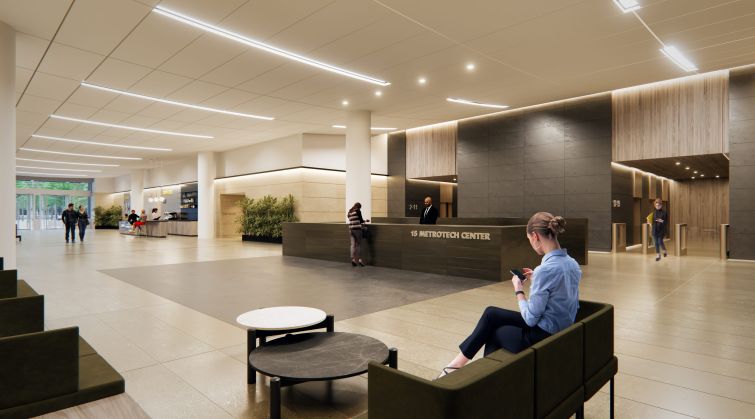 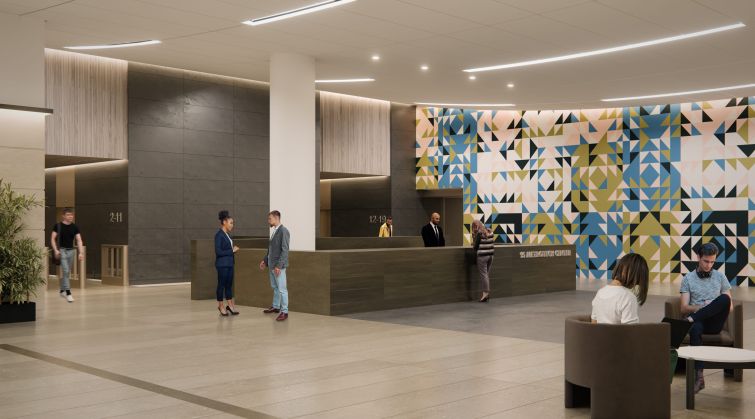 The new lobby will also include a 40-foot-long mural. Image: STUIDOS Architecture 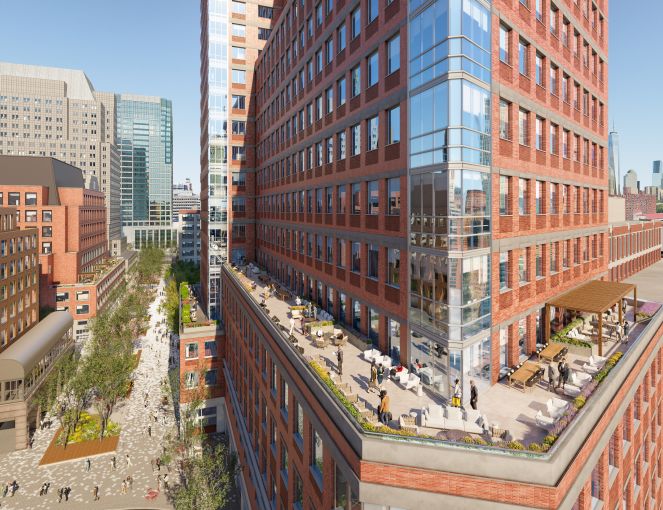 A part of the renovations, Brookfield will convert an unused setback on the sixth floor into a new terrace. Image: STUDIOS Architecture
Previous Next

When Brookfield Properties acquired MetroTech Center in 2018, the real estate investment trust set out to revamp the dated 16-acre office complex, which Forest City Ratner constructed in the late 1980s and early 1990s.

Brookfield plans to renovate the lobby of 15 MetroTech, a 21-story, 700,000-square-foot office tower on the east side of the campus, by Flatbush Avenue Extension and Myrtle Avenue. The work, which will begin this summer, will involve adding a cafe and a 40-foot-long mural, along with new turnstyles, lighting and fixtures.

The STUDIOS Architecture-designed renovation includes a long reception desk made of dark wood, gray stone tiling on the walls and part of the floor, and lighter ash wood panels on the walls and ceiling for the elevator lobby. There will also be new brass turnstyles, which tenants will be able to swipe through using their badges or their phones, as long as they have Brookfield’s smartphone app.

Other new additions include seating areas with angular, olive green, modernist couches; rounded black-and-white coffee tables; and semicircular lounge chairs. A pair of 3,000-square-foot retail spaces off the lobby will also get updated. One is vacant, while sandwich-and-salad spot Cafe Metro currently occupies the second.

Mark Kostic, an executive at Brookfield Properties, said that he expects Cafe Metro to vacate its space, and both stores will eventually be leased to local restaurants or cafes.

The building has 200,000 square feet of available space that was vacated last summer by Anthem, the insurance company. Asking rents are in the mid-$50s per square foot. Brookfield also plans to convert an unused sixth-floor setback into a 3,000-square-foot wraparound terrace for the tenant that leases that floor.

Despite the weak office market caused by the pandemic, Kostic said he was “optimistic. I think this building is not that old, and the price point we’re talking about, we’re going to be more competitive than most of those new construction deliveries. It’s going to be competitively priced and positioned.”