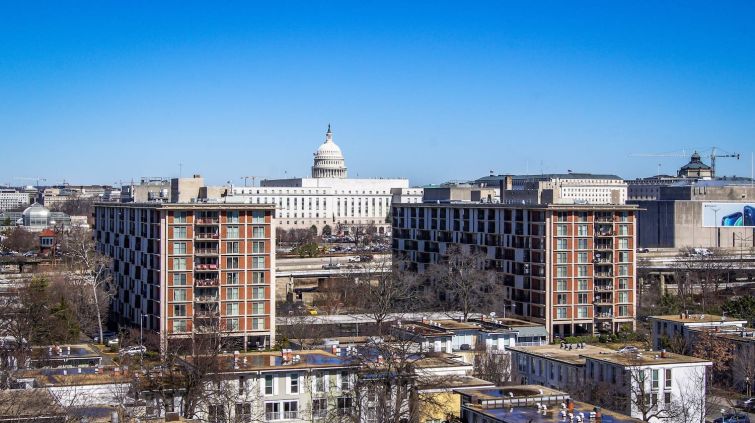 The nine-story complex, located at 201 I Street SW, houses a mix of rent-restricted and market-rate units.

“From the investment standpoint, this deal is in the extended-use period, which expires in 2034, so there are still rent restrictions on 65 percent of the units; the other 35 percent are market-rate units,” Marty Zupancic, first vice president of investments and multifamily specialist in Marcus & Millichap’s D.C. office, who is handling the listing, told Commercial Observer. The extended-use period, part of the low-income housing tax credit (LIHTC) program, refers to a 15-year period where owners can exit the program through a relief process.

The firm isn’t disclosing a potential asking price, nor providing pricing guidance, and is targeting both national and local buyers. There are several potential plans a buyer could undertake, Zupancic noted.

“One play is to continue to preserve the affordable housing and, as you get closer to the expiration of the extended-use period, you could re-syndicate the deal,” he said, about expanding the LIHTC tax credit.

Another play, he noted, was to redevelop everything and have the property — which is zoned for 910,487 square feet, but has only been built to 546,234 square feet — ready for its next phase in 2034 with new additions on the remaining portion of the unbuilt space.

The complex, which houses a mix of studio, one- and two-bedroom units, was originally developed in 1959 and was the first significant residential community in the area. The ownership consists of a general partnership called Capitol Park Apartments Limited Partnership, which acquired the property in 2002.

Studio apartments sized at about 480 square feet are currently being marketed in the $1,320 to $1,630 per month range, while roughly 600-square-foot one-bedrooms are renting for about $1,420 per month, according to the building’s website.

According to Zupancic, the new owner will have a chance to play a significant role in the area’s continued revitalization.

“The opportunity to acquire an existing multifamily asset with such significant future development potential does not present itself every day,” he said. “It’s a massive asset, right in the middle of significant diverse development, and there’s a lot that you can do with it.”

Over the past two decades, the Southwest Waterfront and Navy Yard submarket, which is anchored by Nationals Park, Audi Field, and phase one of The Wharf, has undergone a transformative revitalization.

“You have this petri dish of development that’s occurring, and, over the next several years, as these projects deliver, that’s going to offer buyers more options of what they can do,” Zupancic said.

Currently, the area has more than $6 billion dollars and 13.1 million square feet of further mixed-use development in the pipeline, including phase two of The Wharf, The Yards, and Buzzard Point, all of which are located less than a mile from the apartment community.

“Sports stadiums have historically been major catalysts for growth in submarkets throughout the United States,” Eric Jentoft-Herr, an associate with Marcus & Millichap, said. “Despite the short-term uncertainty that COVID-19 has caused, we are confident that demand will return quickly and the fundamental characteristics that drove development around stadiums like Nationals Park and Audi Field will continue to be in effect long into the future.”