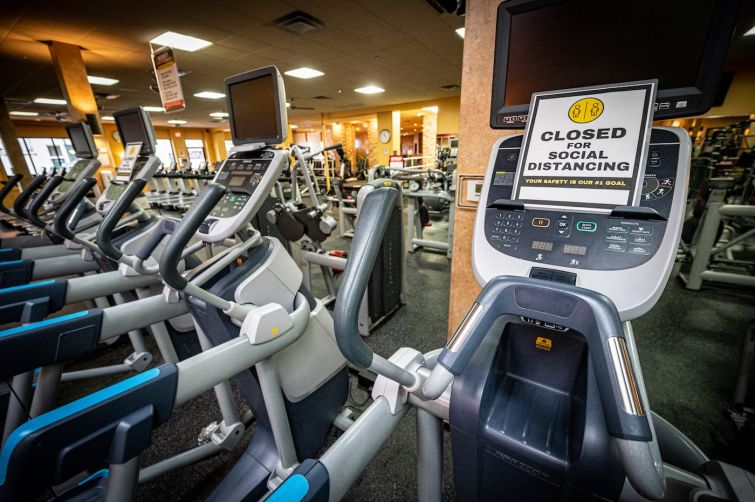 Signs are posted for social distancing on machines throughout the facility. Gyms are still currently closed for indoor operations in Southern California. gcornfieldcommercialobservercom

The retail sector of commercial real estate is feeling the pandemic burn, but with coronavirus case rates declining and vaccine rollouts scaling up, landlords are hoping to resume activity soon in California.

JLL announced that EōS Fitness signed a lease for 43,130 square feet at the Hawaiian Gardens Town Center in suburban Los Angeles County, where it plans to open its newest facility next month. Deed records show JH Real Estate Partners owns the 128,445-square-foot retail center at 12090-12144 East Carson Street in Hawaiian Gardens — the smallest city in the county near the southeastern border.

“We are seeing renewed interest from retail occupiers in making real estate decisions,” JLL’s Shauna Mattis said in a statement. “As the COVID pandemic continues to evolve, we expect to see shopping-center leasing normalize.”

JH Real Estate Partners acquired the property for $22.2 million in 2015, according to property records. It’s at the corner of Carson Street and Norwalk Boulevard, just east of the Interstate 605 freeway.

Retail centers have widely struggled since residents were restricted to their homes to curb the spread of the coronavirus, and most fitness centers in California have been shut down for almost a year. Gyms are still currently closed for indoor operations in Southern California, which was hit hardest in the state by the winter surge in cases.

The state dictates the reopening process for different areas, designating counties into one of four tiers based on the region’s case rate. Health officials last week announced some counties with low transmission rates can start to advance to the next tier, which would allow gyms to open at 10 percent capacity, including San Mateo, Marin, Yolo, Shasta and Humboldt. Further, Santa Clara, San Francisco, San Luis Obispo, El Dorado, Napa, Lassen and Modoc counties are expected to join that tier this week.

EōS Fitness currently has more than 75 locations open or in the pipeline in Arizona, Southern California, Nevada, Utah, and Florida.