The development will include 48 units of affordable housing

The approval comes with an increase in the allowable floor area ratio, as well as height and zoning changes for the project site. It’s located at 7940 North Lankershim Boulevard and 11664 West Strathern Street in the Sun Valley neighborhood, just north of North Hollywood, about two miles from Hollywood Burbank Airport.

Following the demolition of two one-story commercial buildings, the seven-story development called Lankershim Crossing will rise about 87 feet with a maximum floor area of about 678,330 square feet. About 11 percent, or 48 of the total units, will be set aside for low-income households. The project also features 22,000 square feet of commercial space, which will include a drugstore or market, and two commercial spaces proposed for restaurant use.

According to a city staff report, Lankershim Crossing will be one of the first mixed-use developments in the area, which has seen very little new development of its kind. The area is also generally characterized by a mix of automobile-related uses, and both multifamily buildings and single-family homes.

L.A.-based Hankey Investment has developed other major multifamily complexes around the city, including the $500 million Circa mixed-use development in Downtown L.A., and The Pearl on Wilshire in Koreatown. Construction is nearly complete on Kurve on Wilshire, a $300 million high-rise development by Hankey with 644 units across from Lafayette Park. 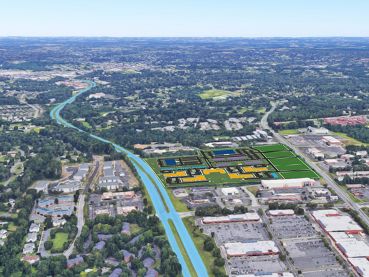