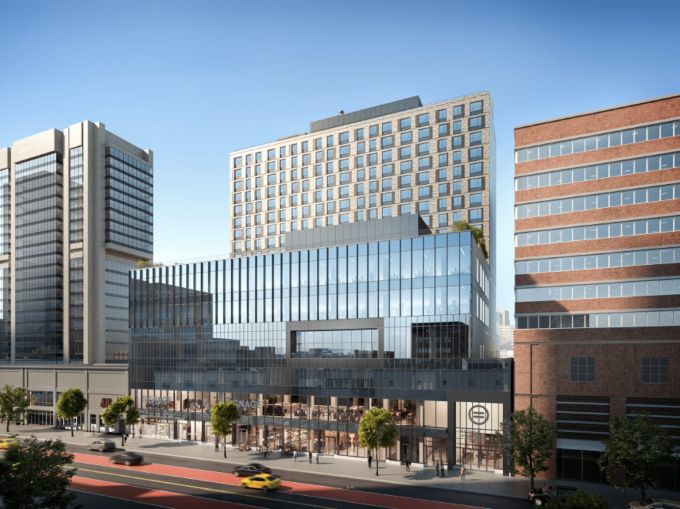 Twenty years after it launched its Urban Investment Group, Goldman Sachs is looking to build on its real estate commitments in predominantly minority communities — and under new leadership.

Sherry Wang and Daniel Alger were named co-heads of UIG in late February after its previous managing director of nearly 16 years, Margaret Anadu, was appointed Goldman Sachs’ global head of sustainability and impact for asset management. With Wang and Alger at the helm, UIG is looking to expand upon its more than 11.2 million square feet of commercial, retail, and industrial space invested in, what are often, economically disadvantaged areas.

“We will continue to invest with a community-centered approach and have reaffirmed our unwavering commitment to diverse representation, especially among decision makers,” Wang said. “That includes focusing on diversity within our own investing team, and that of our sponsors and nonprofit partners.”

Wang first became involved with UIG in 2009, two years after joining Goldman Sachs as an analyst. She was promoted to managing director in 2017, and is a member of the UIG Investment Committee.

Alger, who was named a managing director in 2019, first joined Goldman Sachs as a UIG associate in 2009. Also a UIG Investment Committee member, he served as an officer in the U.S. Navy Special Operations prior to his Goldman Sachs tenure.

“Over the last 20 years, we’ve proven out our impact investment thesis, and we believe that there are interesting opportunities today to bring in additional sources of capital from like-minded investors to finance projects that are providing affordability, delivering high-quality services, and promoting economic development,” Alger said.

In their new roles leading UIG, Alger and Wang want to address gaps in housing and health care that exist in poorer communities. The co-heads stressed that one of their chief goals is to help drive increases in earning potential by investing in areas like education, skills-based training, child care for working parents, and adding capital for small businesses.

“Given the immense challenges facing underserved communities, the Urban Investment Group’s focus on innovative capital solutions which narrow opportunity gaps is as important now as it ever has been,” Anadu said. “Having worked with both Sherry and Dan closely for over a decade, I know that their investing acumen and passion will lead the team to new heights in the coming years.”

UIG’s latest project was unveiled with a St. Patrick’s Day groundbreaking for the National Urban League’s new $242 million headquarters in Harlem. Goldman Sachs is contributing $188 million of financing for the nearly 42,000-square-foot, 17-story building to soar in the same neighborhood where the civil rights and urban advocacy organization was founded in 1910.

When completed, the mixed-use project will include 170 affordable housing units; a civil rights museum; 73,000 square feet of office space for community groups; 105,000 square feet of retail; and a conference center for the National Urban League Institute for Race, Equity, and Justice. The Urban League Empowerment Center development is replacing a retail building on 121 West 125th Street and an adjacent, four-story parking garage.

“Reaching this important milestone is another step toward creating more opportunity and advancing civil rights in our city,” Anadu said in a statement after the groundbreaking.

A few months earlier, UIG — in partnership with the Gotham Organization — rounded out a $235 million capitalization of the roughly 400,000-square-foot Broome Street Development project on the Lower East Side. The project includes a 30-story, 378-unit, mixed-use residential tower at 55 Suffolk Street. A quarter of those units will be permanently affordable homes.

The recent transactions add to the more than $1.9 billion that Goldman Sachs, and its partners in the public and private sectors, have committed since 2009 toward economic development projects in New York City alone. Other deals include a redevelopment of the Brooklyn Navy Yard, rehabilitation of Loew’s Kings Theater in Brooklyn’s Flatbush section, construction of Empire Outlets on Staten Island, and a 1.7 million-square-foot development on city-owned land on the Lower East Side.

But Goldman Sachs’ UIG outreach has extended well beyond the firm’s New York headquarters, with real estate projects spearheaded across the Hudson River in the New Jersey cities of Newark and Camden, as well as a life sciences, mixed-use project in nearby New Haven, Conn. It also has invested in New Orleans, Detroit, Chicago, Memphis and Salt Lake City under the program.

“The Goldman Sachs Urban Investment Group has played an important role in the revitalization of our downtown,” Baraka said. “They have invested in mixed-use, Newark development that creatively combines housing, retail, office and industrial uses, and also preserves our history through adaptive reuse of legacy buildings.”