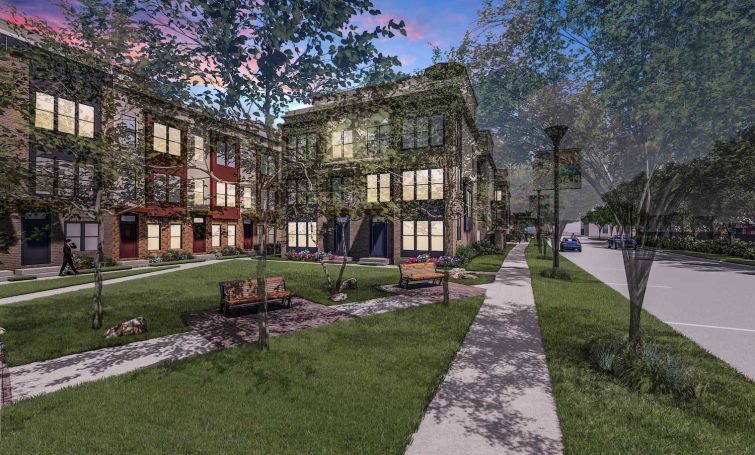 EYA Development has acquired 8.3 acres of Graham Park Plaza, an 18.6-acre retail center in the Washington, D.C., suburb of Falls Church, Va., for $20.3 million, with plans to convert the property into townhomes.

The seller was Federal Realty Investment Trust, which maintained the eastern 10.3 acres of the property. That portion, which is anchored by a Giant supermarket, will continue to operate after Federal Realty abandoned earlier plans for a mixed-use redevelopment.

EYA will build up to 177 townhomes on the western portion of the property, which formerly housed Loehmann’s and other retail stores. The developer will allocate 12.5 percent of the townhomes as affordable housing units. No other details about the homes were disclosed.

“The ability to walk to retail has become equally critical to us as the ability to walk to transit or parks,” Evan Goldman, EYA’s executive vice president of acquisitions and development, told Commercial Observer. “So, we’ve been looking for sites in Northern Virginia that provide this ability and, on top of that, provided the ability to create a project where the price points are obtainable in an area where there’s high demand for housing.”

“We are thrilled to collaborate with EYA in transforming Graham Park Plaza into a walkable community featuring a mix of uses designed to meet the daily needs of the new development as well as the surrounding community,” Deirdre Johnson, Federal Realty’s vice president of asset management, said in prepared remarks. She added that the sale capitalizes on the strong land value at the site and allows Federal Realty to redeploy the proceeds on improvements to other projects in Northern Virginia, including the eastern side of the Graham Park Plaza shopping center.

Goldman added that EYA’s townhome developments around the D.C. region, such as Mosaic District in Merrifield, Va., and Cabin John in Potomac, Md., have created value for its partners looking to augment their existing retail assets at neighborhood shopping centers.

“We look for great partners, and I had worked at Federal Realty for almost eight years before coming to EYA, so I know them well,” Goldman said. “When they reached out to us, it made a lot of sense to partner with someone we trusted and we know is going to make sure the shopping center is taken care of.”

The Fairfax County Planning Commission and Board of Supervisors have approved the zoning for the project, which will also include open space and parks, and cosmetic improvements to the remainder of the shopping center.