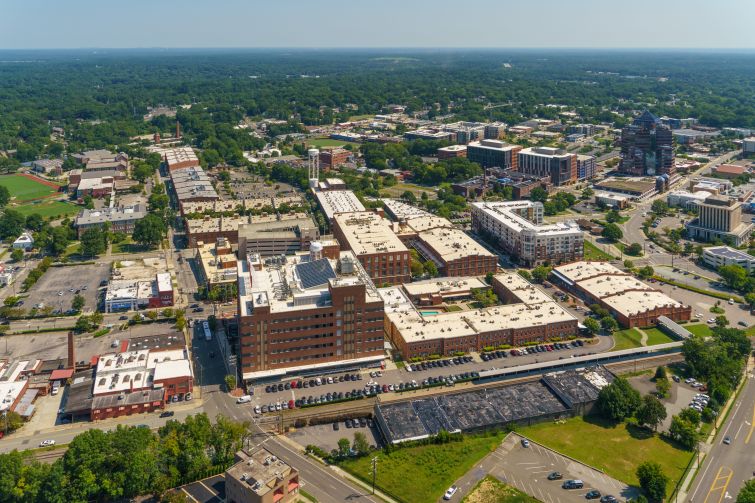 An aerial view of the West Village development in downtown Durham. Courtesy: Newmark

The financing is backed by West Village, a 14-acre development at 605 West Main Street in the Warehouse District of Downtown Durham, one of three municipalities that make up the burgeoning Research Triangle region of North Carolina.

Newmark’s Bill Weber and Henry Stimler, along with Ari Schwartzbard and Clifford Welden, arranged the financing on behalf of The Connor Group.

Stimler said in a statement that his group worked “through a challenging economic climate … to structure a successful financing solution” while developing a new, working relationship with Blackstone Mortgage Trust.

“This landmark asset spans a mix of uses across eight blocks and is an integral part of the fabric of downtown Durham,” Stimler added.

The Connor Group acquired the expansive West Village development in February 2016 for about $187 million from a joint venture between Federal Capital Partners and Bell Partners.

The buildings pre-date the 1920s and include 22-foot ceiling heights, industrial-style lofts, exposed brick, hardwood floors, and original wood beams that existed within the historic buildings prior to them being redeveloped throughout the late-1990s and mid-2000s, according to The Connor Group’s website and a 2016 report on the property by Triangle Business Journal.

The West Village project was conceptualized by former Duke University basketball players Christian Laettner and Brian Davis via an entity called Blue Devil Ventures, per the Triangle Business Journal. The pair had been working on redeveloping the former tobacco warehouses since the late-1990s when the previous owners, Federal Capital and Bell Partners, moved in and started buying portions of the project from 2011 to 2013.

After acquiring the site, Federal Capital and Bell Partners deployed additional capital to further upgrade the apartment buildings and provide more amenities for tenants. The duo also erected a new, six-story apartment building on the site in 2014, adding 156 units to go along with the roughly 453 loft-style apartments that were created within the old tobacco warehouses.

Amenities at West Village include three dog parks, five courtyards, a pool with cabanas, a rooftop saltwater pool with a sundeck, a fitness center and yoga studio, a clubhouse building with a business center, and outdoor pavilions with barbecue grills and TVs, according to the property’s website.

Monthly rents at West Village currently range from around $1,300 for one-bedrooms to north of $3,000 for three-bedrooms, per the property’s website.