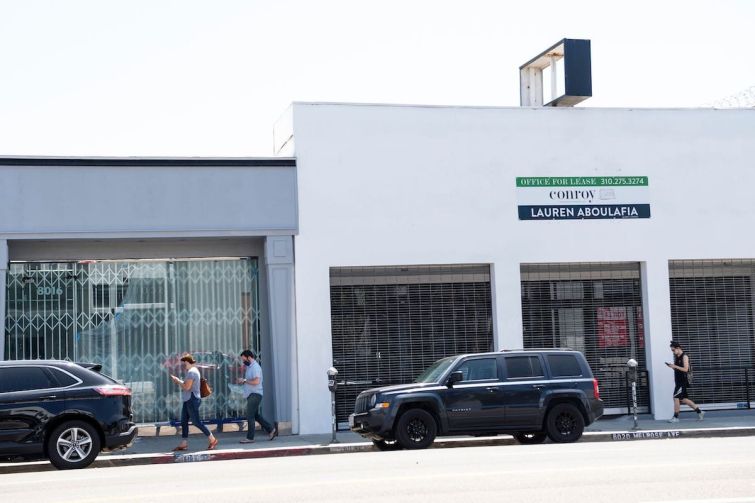 People wear masks as they walk by closed stores on the famous shopping area of Melrose avenue in Los Angeles amid the coronavirus pandemic. Photo: VALERIE MACON/AFP via Getty Images

With an eye on the onslaught of pandemic-driven commercial vacancies, Los Angeles County officials are hatching a plan to convert some of that empty space into affordable housing.

L.A. has been struggling with an affordable housing shortage and homelessness crisis for years, and now is grappling with the fallout of extended economic shutdowns and business restrictions. The L.A. County Board of Supervisors approved a new motion on Tuesday to create strategies to repurpose empty commercial real estate properties into multifamily housing.

“One such industry that has had to adapt, but faces an uncertain future, is commercial real estate,” the motion reads. “The pandemic has forced the closure of restaurants, gyms and retail stores, and has impacted hotels as travel patterns have nearly halted and reduced commercial office space occupancy.”

The supervisors point to the national work-from-home transition, allowing businesses around the country to reduce their need for physical space. As companies downsize physical footprints to reduce costs, it will open up more available space. With $430 billion in commercial and multifamily real estate debt set to mature in 2021, the motion refers to a Bloomberg report that expects many property owners who’ve fallen behind on debt payments to sell at distressed prices, or return properties to banks.

Separately, a report by UC Berkeley’s Terner Center for Housing Innovation in December notes that the process of converting land zoned for retail and office into multifamily could revitalize this sector and address challenges that local jurisdictions face with the rising cost of housing and construction.

“Allowing new homes and mixed-use projects to be built on these sites can serve as a catalyst for new economic growth while at the same time addressing California’s ongoing housing shortage,” according to the report. “This form of redevelopment also advances infill development goals, bringing residents closer to jobs, amenities, and transit.”

L.A. County has also declared an emergency shelter crisis, and continues to see a rapid increase in the homeless population, in part due to the lack of affordable housing. Last year’s homeless count showed nearly 66,500 people experiencing homelessness, a 12.7 percent rise from 2019. There are currently more than 150,000 people experiencing homelessness on any given night in California, according to state estimates.

Of the 191,000 acres of commercially zoned land in the Greater L.A. region, the supervisors’ motion directs county staff to assemble a list of underutilized commercial real estate properties that are ideally suited for interim and permanent affordable housing, and also recommends establishing public-private partnerships to repurpose privately owned land and buildings. The report will lay out the strategies and opportunities for acquiring properties for conversion.

Housing will remain a core issue for state lawmakers this year. In terms of housing policy, the 2020 legislative session ended “mostly in disappointment as nearly every significant housing-related bill failed to reach the governor’s desk,” the Terner Center’s policy director David Garcia wrote this week in a review of 2021 proposed legislation. “Efforts to expand where and what housing can be built largely fell short.”

Current bills at the state level include a proposal that would require cities to allow residential development on commercially zoned property, as well as a streamlining tool for cities to rezone certain areas to allow up to ten units per parcel. Separately, AB 816 introduced last week would require governments to develop plans to reduce homelessness by 90 percent from their current levels before 2030.

Updated: This story was updated to report that the motion was approved by the Board of Supervisors.