The emergency ordinance requires an additional $5 per hour in pay, but the city’s chief legislative analyst warned it could lead to layoffs 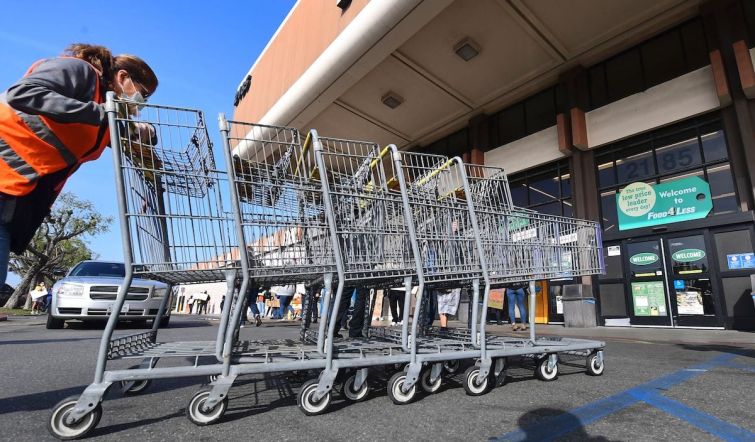 A Food 4 Less employee pushes carts past supermarket workers gathered to protest in front of the supermarket in Long Beach after a decision by Kroger to close two supermarkets rather than pay workers an additional $4 in "hazard pay." Photo: FREDERIC J. BROWN/AFP via Getty Images

The Los Angeles City Council on Wednesday voted 14-1 in favor of mandatory “hazard pay,” guaranteeing an additional $5 per hour for the next 120 days for grocery store workers who continue to work during pandemic lockdowns.

Sharon Tso, the chief legislative analyst, also reported the motion could produce a court battle after the California Grocers Association filed a lawsuit against the city of Long Beach for its $4 “hero pay” measure that passed last month. The city of L.A.’s motion follows the county’s approval of a similar “hero pay” mandate for grocery store and retail drug companies on Tuesday for unincorporated areas that aren’t in the county’s 88 cities, which will go into effect Friday and last 120 days, the L.A. Times reported.

Kroger announced earlier this month it would close two supermarkets in Long Beach rather than pay workers an additional $4 in “hazard pay.” Kroger owns popular local grocery chains Ralphs and Food 4 Less, and said it will close one of each in April after the Long Beach city council passed its law.

The motion calling for the ordinance was introduced by Council President Nury Martinez and Councilman Mitch O’Farrell. It cites a report by the United Food and Commercial Workers that found after people were restricted to their homes and prevented from dining out, grocery store companies nationwide saw pandemic-boosted profits. But they used the additional income to buy back shares, and mislead the public that hazard pay would have to be passed onto consumers. The report pointed to local grocery chains like Food 4 Less and Ralphs that have seen sales increase significantly since stay-at-home orders were enacted, but little of those profits went to workers.

“Cashiers, stockers, baggers and so many more have risked their lives every day since March making minimum wage to make sure we have everything we need to stay safely at home to get through this crisis,” Martinez said in a statement. “While these companies have seen massive profits, it has not trickled down to their employees. These companies can afford to pay the Hazard Pay, they just don’t want to.”

O’Farrell added, “their greater risk of exposure to COVID-19 is by definition hazardous work, and the money they earn should be commensurate with those risks associated on the job.”

On Tuesday, Gov. Gavin Newsom also signed a bill to send $600 stimulus payments to about 5.7 million low-income Californians, and designated $2 billion in grants for small businesses struggling amid the closures.