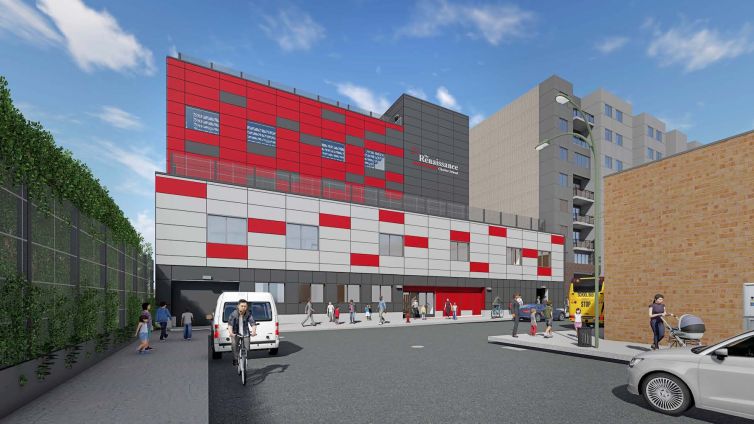 A rendering of the new school at 45-20 83rd Street. Credit: Meridian Capital Group

Earlier this week, Barone Management closed on a crowdfunded equity offering for a $34 million charter school in Elmhurst, Queens, the company announced.

The $6.5 million in equity completes the financing for the ground-up development, which is pre-leased to the The Renaissance Charter School for 31 years. The 67,286-square-foot building, at 45-20 83rd Street, is also financed by a $20.2 million construction loan from Metropolitan Commercial Bank, and an additional $6.8 million in equity from Barone.

It was the first time Barone founder and principal Scott Barone chose to attempt crowdfunding. “I’m an old-school guy,” Barone said. “We’re used to doing this with 100 percent of our own funds.”

Generally, Barone said, he shies away from institutional money and equity partnerships because he likes to do things his own way, but something changed during quarantine. “During the early stages of quarantine, when I was locked up in the house with a wife and three kids, I came across an article about how crowdfunding was becoming more prevalent,” he said.

Barone reached out to CrowdStreet and met with Ilya Gamer, a managing director at the firm, in what was the first post-quarantine lunch for both of them. “It will always have a special place in my heart,” Barone said, and Gamer agreed.

After a round of due diligence on Barone, the two sides moved forward with working out the metrics of the deal. It was CrowdStreet’s first charter school deal, and both Barone’s previous experience in that sector, as well as the reputation of the 27-year-old Renaissance, instilled confidence, Gamer said.

“Your bet on a charter school is really a bet on the team that runs the school,” he said. “It’s about the strength of the operator, how good the education is at the school.”

Construction had already begun when the offering was launched, so the deal was not contingent on the new equity, Barone said.

In addition to the strength of the financials, both Gamer and Barone highlighted the social benefits of the deal, which was categorized as a “social impact investment” on the offering. They found that it was attractive to investors, particularly in Elmhurst, “the epicenter of the epicenter” of the pandemic during the worst of New York’s surge.

The offering had a minimum offering of $25,000 and closed with 153 individual investors. It has a targeted internal rate of return of 20.8 percent, and a targeted investment period of seven years, per the offering.