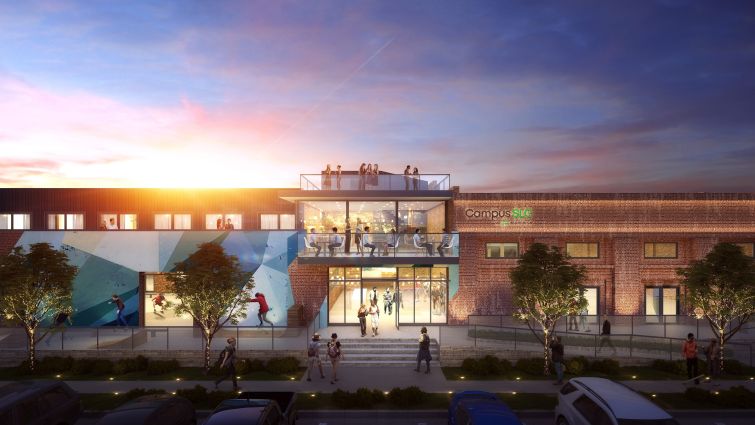 Seattle-based Columbia Pacific Advisors’ bridge lending practice has provided just over $31 million in debt to developer Lake Union Partners to redevelop a former industrial property in Salt Lake City into a sizable hotel, retail and commercial mixed-use asset that will be anchored by outdoor and sports retailer, evo.

Lake Union Partners has partnered with evo in the development, which is being built with an aim to create a community hub around “outdoor culture” in Salt Lake City’s Granary District, one of the city’s oldest and now-fastest growing areas located just south of the downtown area. Evo announced its intentions for the project in June 2019.

The retail complex will be called Campus SLC and will span around 130,000 square feet. Evo will anchor the project, but will be accompanied by a range of other “complementary” businesses that will likely help bolster the goal of facilitating a culture around outdoor sports and recreation. Evo has partnered with the Bouldering Project to bring a 30,000-square-foot “bouldering,” or rock climbing, gym to the project, for instance. Bouldering Project will co-anchor with evo, as per information from Columbia Pacific.

Columbia Pacific Senior Vice President of real estate lending, Will Nelson, said in a statement that “Campus SLC provides a unique opportunity to participate in bringing a one-of-a-kind, outdoor-enthusiast-inspired retail and hospitality experience to Salt Lake’s burgeoning Granary District. We believe the Granary is an ideal location for Campus SLC, due to the district’s strong leasing activity and ongoing redevelopment into the city’s most vibrant neighborhood.”

Nelson expressed elation over working with Lake Union Partners, characterizing the firm as a “seasoned developer with a strong track record of delivering unique, high-quality projects.” Lake Union has a history of building quality, mixed-use residential and commercial assets throughout major primary markets in the Pacific Northwest and the broader Western region of the U.S.

Campus SLC will feature an outpost for outdoor sporting goods shop L9 Sports (or Level Nine Sports), as well as an indoor skatepark from Seattle-based All Together Skatepark, an art gallery, creative workspace, and a range of food and beverage options. The original, targeted opening date was fall 2020, as per a June 2019 report in SGB Media.

Evo Founder and CEO Bryce Phillips told SGB Media in June 2019 that the idea for Campus SLC was “directly born from [our] founding DNA,” which he said was built on striving “to build community through a love of the outdoors, music, arts and culture.”

Phillips added that evo’s goal for Campus SLC, in line with its founding mission, was “to create a crossroads and hub for the Salt Lake City community.”