The success of companies such as View, as well as demand for more energy-efficient buildings, mean glass is increasingly more than a means to a view 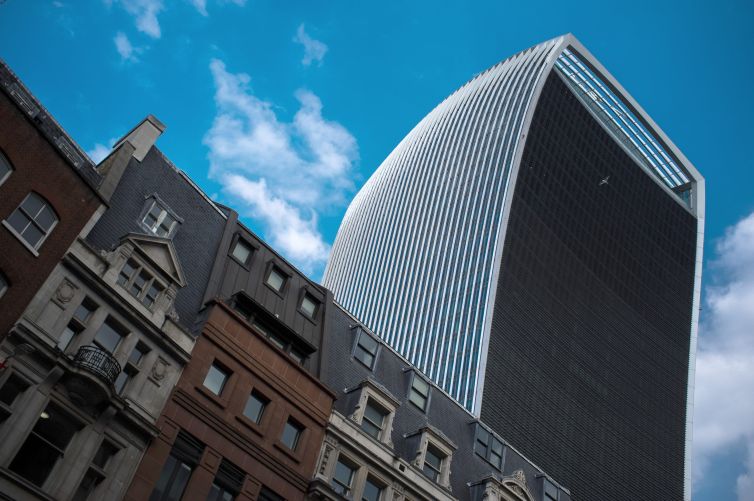 The so-called Walkie Talkie Tower at 20 Fenchurch Street in London was derided early on for the scorching glares that its glass produced. Alberto Pezzali/NurPhoto via Getty Images

All over the world, glass boxes have not only become inevitable, but they’ve gotten smarter than ever before.

It’s the material of choice to wrap skyscrapers in, whether they be for office space or luxury condominiums. You even see floor-to-ceiling glass in people’s bathrooms, high up in the sky, so folks can face the world secure in the knowledge that they can only be viewed by those with telescopes or, this being the 2020s, the occasional drone.

One World Trade Center, the tallest tower in the Western Hemisphere, is a glass box. So, in fact, are all the towers — 4 and 3 World Trade Center — that have been built in the wake of the terrorist act that destroyed the Twin Towers, killing more than 2,600. So is One Vanderbilt, the 1,500-foot tower built next to Grand Central Terminal, the height of office luxury.

Over at Hudson Yards, the towers are all glass-dominant, be they office buildings or residential ones.

Increasingly, too, this isn’t your grandfather’s glass. The glass used to sheath buildings today is treated and coated with reflective materials to reduce its most unfriendly aspect — that it refracts sunlight and makes buildings, and the tenants inside them, hotter — while maintaining its most positive aspect. That is, its maximization of the amount of natural light that can penetrate deep into buildings and radically reduce the amount of artificially generated light they have to use.

“In the last two decades, we’ve seen tremendous changes in the performance of glass,’’ said Christoph Timm, an associate director at Skidmore, Owings & Merrill, an architecture firm that has designed high-rises all over the world, including 1 World Trade and 7 World Trade. “All our buildings, pretty much, have glass at least on the facade. It is fantastic what we’ve seen in the industry. There’s all these new products developed that reduce the flow of heat from the outside to the inside, or the other way around, depending on the season, as well as protecting people.”

Basic glass, which consists of silica sand, soda ash, limestone and other ingredients, is produced by baking it at temperatures that peak at 2,900 degrees, according to a video from Guardian Industries, one of the major suppliers of architectural glass. It is then coated on an assembly line that also drops in metal oxides and other materials designed to improve environmental performance.

However smart it’s getting, glass does have its skeptics, such as Dr. Harriet Harriss, dean of the Pratt Institute School of Architecture in Brooklyn. She notes that the underlying nature of glass is to concentrate heat, as seen in a greenhouse, where plants can be grown any time of the year due to the warming nature of the structure’s glass skin. To make a tower habitable, a great deal of energy typically has to be expended to cool the interior, possibly by burning fossil fuels to run air conditioners, Harriss said.

The Great London Exhibition of 1851, which was under the glass of the building known as the Crystal Palace, was marred by uncomfortably hot temperatures in an era that pre-dated air conditioning. Designer Joseph Paxton came up with a translucent roof that diffused sunlight and a ventilation system that allowed hot air to escape, according to a 2008 paper in Architectural Research Quarterly.

Harriss also alluded to London’s “Walkie Talkie” Tower, the office skyscraper so-called because its shape reminds some of the handheld electronic communications device, designed by world renowned architect Rafael Viñoly. In September 2013, it acquired some less-complimentary names in the British press, like the “Fry-Scraper” and “Walkie Scorchie,” when the sunlight that reflected off the concave tower became so intense that it damaged parked cars and the doormat of a nearby store.

In an interview with London’s Guardian newspaper, Viñoly blamed the incident on the removal of some louvers that were supposed to absorb the heat, but were erased from the building plans as a cost-cutting move. The tower has since been fitted with shades to prevent such incidents.

The debate over desirability of so much glass in buildings continues. In April 2019, New York Mayor Bill de Blasio said glass-and-steel skyscrapers “have no place in our city or on our Earth anymore.”

And, in July of that year, Vice Media reported that glass skyscrapers are so energy inefficient that they can be “energy vampires,” sucking up power at sometimes incredible rates and creating that much more in the way of greenhouse gas emissions. “Through better and continuous insulation, airtightness and ventilation with heat recovery, the cost of heating a building can be reduced by 90 percent,” according to Vice.

Rao Mulpuri, chief executive officer of View Inc., a leading maker of smart windows, said technological advances have reduced these potentially harmful effects. In addition to coatings and additives, there are sensors that can adjust the tinting of glass to increase tenants’ comfort and reduce landlords’ energy use.

These advancements have made smart windows more prevalent in office buildings, especially in hubs, such as New York, affecting the day-to-day lives of millions of workers.

Key Media & Research (KMR), a Virginia-based research firm and publisher of the trade publication USGlass, estimated that just over 350 million square feet of architectural glass was used in non-residential construction in 2020. It actually went down some 15 percent due to lesser demand, said Nick St. Denis, KMR’s director of research, a phenomenon he attributed to the pandemic’s negative impact on construction.

Due in part to the popularity of smart windows, however, the firm projects a 5 percent increase in the use of architectural glass in 2021. “The architectural glass market continues to expand not only due to it emerging as the predominant exterior building material, but also because of the added value in more advanced products and higher-quality glass,” St. Denis said in an email. Additionally, he pointed to a growing demand for interior applications for glass, a demand that could pick up due to office building retrofits and renovations.

“Why do we have glass and windows in the first place?” View’s Mulpuri said. “As humans, we need that connection to the outside and that natural light. One thing we do to reduce glare is, you have these things called blinds or shades or curtains. I call them blunt instruments. [When you use them,] you lose the view. And the heat has already entered inside the glass. If only you can regulate the amount of light and the heat, depending on the angle of the sun and the extent of the sun — that is what smart glass does.”

Light comes in on different wavelengths, including infrared and ultraviolet, Mulpuri said. What he called “active coatings” in the glass are able to filter out the harmful effects of these waves and adjust for different intensities. Engineers can monitor sensors and make adjustments as necessary.

What’s more, Mulpuri said, the next generation of glass will incorporate computer screens directly into the windows, so you will be able to play presentations directly on the glass, or even use the window as a whiteboard, enabling you to write on it and erase.