Many Women Don’t Want to Go Back to the Office Post-COVID: Survey 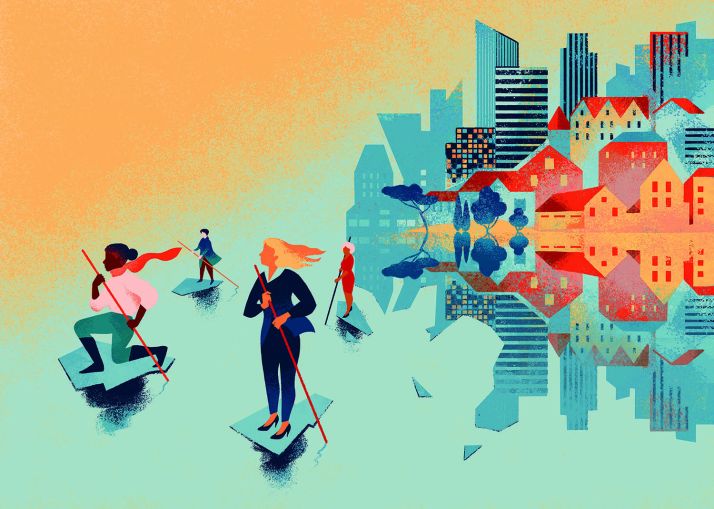 Sixty percent of American women plan to go into the office less frequently post pandemic, and more than half have considered moving away from their current city during the pandemic, a new survey found. Illustration: Asia Bogdanska

More than 40 percent of American women don’t want to return to the office full-time after the pandemic, and more than half have considered moving out of their current city since March, according to a new Change Research poll shared with Commercial Observer.

The San Francisco-based polling firm surveyed 800 college-educated women across several major cities to find out how women will change their work habits once the coronavirus pandemic is over. The results are a further sign that a return to normalcy in the U.S. office market is far from certain.

“As people start heading back to work, a recent World Economic Forum report noted a growing worry that women may disproportionately be less likely to return to the office, posing a real concern that the trend could exacerbate workplace gender gaps,” Change Research pollster Anand Gupta said in a statement. “To get a sense of the potential impact here, we wanted to get a window into how women’s attitudes about working in offices have shifted and what they believe the future holds.

Fifty-eight percent of women said that the pandemic had made it more difficult for them to get work done, and 60 percent reported that their mental health and well-being was the most significant barrier to accomplishing work.

In terms of getting back to the office, 60 percent said they plan to go into the office on a less frequent basis after the pandemic. And 44 percent reported that they were unlikely to return to an office full time. A similar number — 46 percent — said they would feel more “supported and productive” in a woman-only workspace, and 68 percent would join a membership-based coworking space if their employer paid the dues.

The majority of women polled — 53 percent — said they had considered moving to another city during the pandemic. Forty-six percent would consider a monetary offer from their employer to move to a cheaper city. Payment platform Stripe announced in September that it would give $20,000 to any employee who moved away from New York, San Francisco or Seattle, but the worker’s base pay would also be cut up to 10 percent.

Other surveys conducted recently have found that women tend to be more risk-averse than men when it comes to doing activities that would expose them to the coronavirus. They are also more likely to social distance and wear masks in public settings than their male counterparts, an October Gallup poll found.

Overall, the coronavirus pandemic appears to be forcing hundreds of thousands of women to drop out of the workforce, as they struggle to juggle child care and household responsibilities with work. With schools and day care centers closed in many parts of the country, mothers of young children are now twice as likely as fathers to take on an additional five hours of daily chores, according to a recent McKinsey study. The same report noted that nearly a quarter of women with children under the age of 10 were considering leaving the workforce entirely.