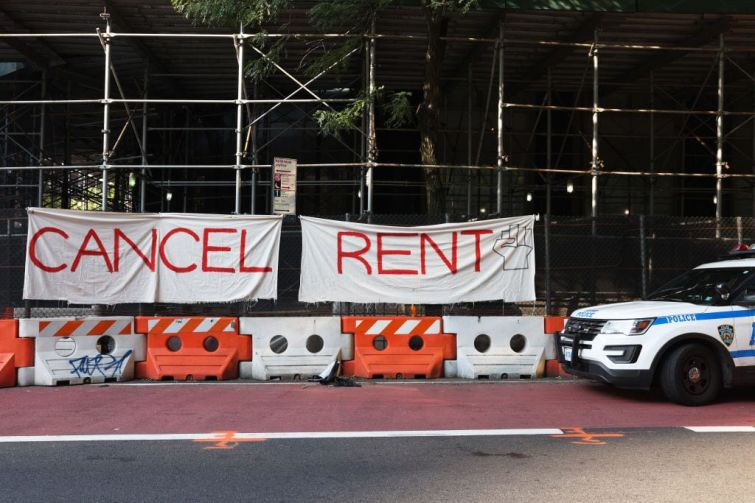 A sign in August in New York City was part of persistent protests against rent collection during the worst of the pandemic. Photo: Michael M. Santiago/Getty Images

The New York State Legislature on Monday greenlighted legislation that will allow renters and homeowners to delay eviction and foreclosure proceedings until May, if they can demonstrate financial hardship caused by the pandemic. The bill, which Gov. Andrew Cuomo quickly signed into law, also aims to aid small landlords.

The expansive new measure permits both renters and homeowners to stave off losing their homes for the next four months by filing a “standardized hardship eviction declaration” form with their landlord, the courts or their lenders. Tenants and owners can declare financial hardship if they have lost income; have been unable to obtain “meaningful employment;” or have increased health, child care or family care expenses due to the coronavirus pandemic.

Despite the homeowner provisions, the law is largely targeted at helping an estimated 800,000 to 1.2 million New Yorkers across the state who are behind on their rent.

After a tenant files the form, active eviction proceedings against the tenant would be suspended until May 1, 2021, and a landlord would not be able to file a new eviction case. The law also stays evictions for the next 60 days to give tenants time to file the hardship form.

The law also allows owners of properties with 10 or fewer apartments to claim financial hardship because of a decline in rent collections, an increase in the aforementioned expenses or a loss of employment. However, the person requesting the forbearance must live in one of the units. Once a landlord or homeowner files the form with their local assessor, mortgage lender or the courts, they will be protected from foreclosure, tax lien sales and negative credit reporting related to falling behind on mortgage payments.

The mortgage and foreclosure protections will only apply to single-family residences, condos, co-ops and owner-occupied multifamily residences with one to nine rental units.

During a special state Senate session on Monday afternoon, Sen. Brian Kavanagh, the bill’s sponsor in that chamber, defended the measure against criticisms from Republican legislators who argued that it was simply delaying the impending eviction crisis in New York.

“This bill sets up another ticking time bomb for a housing crisis down the road,” said State Sen. George Amedore Jr., an upstate Republican developer, who will soon be replaced by Democrat Michelle Hinchey. He also charged that the bill could lead to rampant fraud from wealthy tenants falsely claiming that they could not pay their rent. However, Kavanagh pointed out that a tenant or homeowner could face perjury charges if they file a false affidavit claiming hardship.

“Rather than setting an arbitrary threshold, we’re allowing anyone — even people who make more than $99,000 as a single person or more than $189,000 as a couple — to say they can’t pay their mortgage and have a hardship,” said Kavanagh, who represents Lower Manhattan and a wealthy swath of Brooklyn stretching from Greenpoint to Cobble Hill.

Cuomo also spoke in support of the bill Monday morning, after implementing a patchwork series of eviction moratoriums since March. Over the past two months, a handful of evictions have occurred in upstate cities, and one tenant was evicted in Queens earlier this month. On Monday, before the legislation’s passage, Cuomo extended his current executive orders on evictions, which prevent tenants financially impacted by COVID-19 from being evicted but still allow landlords to obtain money judgments for unpaid rent.

“To people who claim we are kicking the can down the road, what would you have us do?” asked State Sen. Zellnor Myrie of Brooklyn. “Allow tenants to end up on the streets?”

Unsurprisingly, landlords aren’t happy with the measure the New York Legislature passed on Monday, which does little for them.

“Renters need help, not a stall tactic,” said Jay Martin, executive director of the Community Housing Improvement Program, in a statement. “This bill is a stall tactic. Closing the courts for a few months will not relieve the massive debt that tens of thousands of renters face, or provide any financial relief to the hundreds of housing providers who have provided safe, clean homes to millions of New Yorkers during the COVID-19 emergency.”