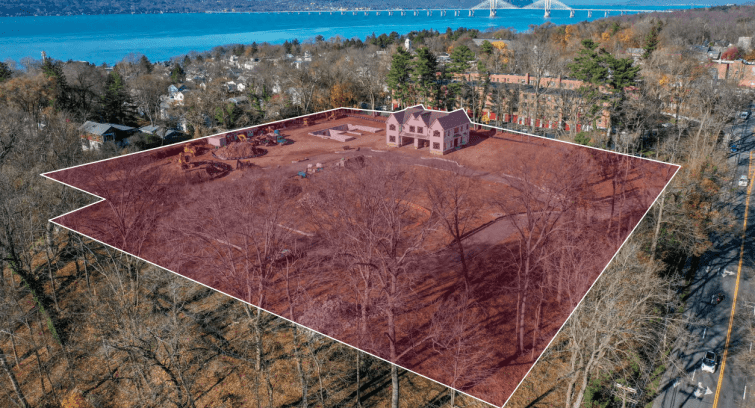 The site that would comprise the Marker 27 development. Courtesy: Rosewood Realty Group/ via OM obtained by CO

Greenwich, Conn.-based Silver Point Capital has initiated the UCC foreclosure on just over $1 million in debt that was provided in 2018 to developer DeNardo Capital Corp. on the now-stalled residential condo development site — a project called Marker 27.

The virtual auction is scheduled to take place the afternoon of Dec. 17, according to offering memorandum materials obtained by CO. Rosewood Realty Group’s The Corbin Group, led by the president of its bankruptcy and restructuring practice, Greg Corbin, is marketing the auction of the lender’s interest in the development.

The roughly 252,700-square-foot development site, which is located within walking distance to the Irvington Metro-North station, sits on a plateau in the middle of Irvington, overlooking the Hudson River. It’s designed as a cul-de-sac of sorts, that, when completed, would sport 11 two-story, single-family-like residential condominium buildings — addressed at 1-30 Marker Ridge — comprising 27 condo residences. Only one of the buildings has been erected on the site, and a concrete foundation has been established for a second building, as per details in the offering memo obtained by CO.

The 27 luxury condo homes can be customized for buyers, and each one comprises three-bedrooms and three-and-a-half bathrooms. Six are designated as affordable; the other 21 are market-rate units. They sport 10-foot-high ceilings, chef’s kitchens equipped with high-end appliances, and a spa in the master bedroom suites, as well as a two-car garage. Altogether, the estimated cost to complete the development would come in at over $14.5 million.

There are two distinct floor plans from which to choose, and prices for each range from around $1.4 million to nearly $2.2 million, as per the marketing materials.