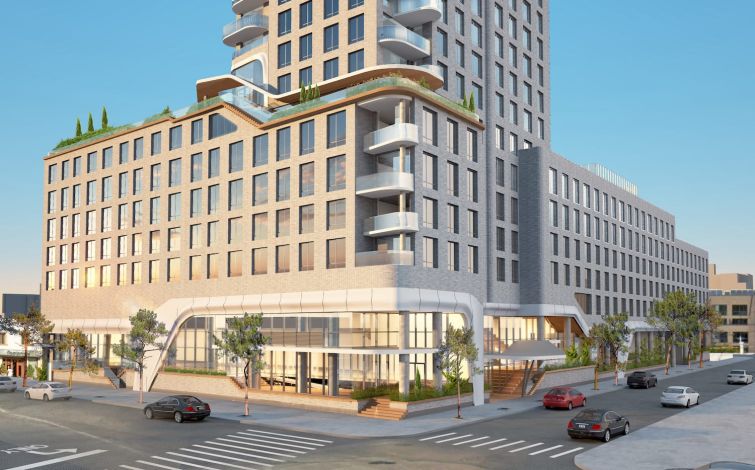 The project, which Studio V Architecture is designing, will have an outdoor pool, a gym, tenant lounges, coworking spaces, an indoor basketball court and a parking garage, according to LCOR. It will also have 11,000 square feet of retail on the ground floor.

“At LCOR, we pride ourselves on identifying sites for new development that generate opportunities for both our residents and the surrounding neighborhoods at large, and I am confident that our latest project in Coney Island fits this bill,” LCOR Executive Vice-President and Principal David Sigman said in a statement. “With several new developments underway on Surf Avenue, along with the zoning changes and public infrastructure investment, we are bullish about how much demand there will be to live here, and are excited to be a part of this next chapter for Coney Island.”

LCOR acquired a 99-year ground lease for the property from the owners of Gargiulo’s Restaurant, who have used it as a parking lot, late last year, Crain’s reported. The developer plans to break ground during the summer of next year and finish construction in 2024, a spokesman said.

Coney Island has experienced a mini-development boom in recent years, after the city passed a rezoning for the neighborhood in 2009 that allowed for more residential developments and high-rise hotels.

John Catsimatidis’ Red Apple Group started leasing for his pair of 21-story, luxury residential buildings, Ocean Drive, at the start of this year. The development has rents climbing just over $4,000 a month for a three-bedroom unit.

“If you can’t afford it, work harder and move into the next building we build,” Catsimatidis previously told Commercial Observer. “We’re looking for people that know what it’s like to live on the beach and don’t mind spending the extra few dollars.”

Despite the pandemic, Catsimatidis is still confident in the neighborhood and recently told the Brooklyn Paper that he plans to build three more buildings in the Ocean Drive complex in the future.