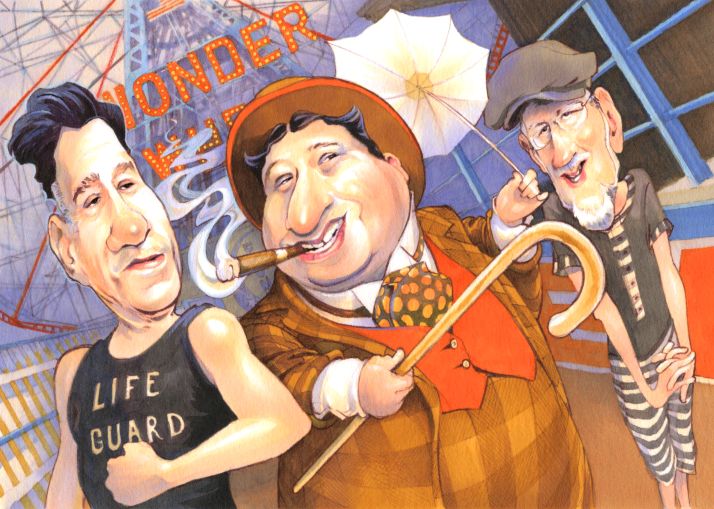 The People’s Playground is getting some new life.

After years of decline, Coney Island, Brooklyn — home of the Cyclone roller coaster and annual hot dog eating contest — has started to see a mini development boom. Nearly 2,000 apartments are expected over the next several years along with new office space, storefronts and retail tenants.

“Coney Island is probably, in my opinion, on the cusp of realizing its potential,” said Timothy King, a co-founder of Brooklyn-based brokerage SVN | CPEX. “There’s been such a concentration of activity that I think you’re going to reach a critical mass of new development coming online and it’s going to once again become a vibrant place.”

These developments include Cammeby’s International Group’s Neptune/Sixth complex. The project calls for a 42-story tower at 532 Neptune Avenue — which will be the tallest building in the area — with 576 residential units along with the recently opened 161,000-square-foot, seven-story commercial and retail building across the street at 626 Sheepshead Bay Road.

Also, Taconic Investment Partners, BFC Partners and L+M Development Partners broke ground on November 2018 for the first phase of its giant mixed-use complex at 1709 Surf Avenue, which will have 446 apartments for formerly homeless and low-income families. All told, 1709 Surf Avenue will add 1,000 residential units, 150,000 square feet of retail space and 80,000 square feet of office to the neighborhood.

And, nearby at 3514 Surf Avenue, John Catsimatidis’ Red Apple Group is nearing completion of its two 21-story luxury residential development, Ocean Dreams, which will start leasing in November.

“You’re suddenly looking at a type of asset that did not exist prior,” said Constantine Valhouli, co-founder of real estate analytics firm NeighborhoodX. “It reflects Brooklyn closer to the city and it also reflects the dense urban development that evokes places like Miami.”

Catsimatidis, whose claim to fame includes running in the 2013 mayoral race, has spent nearly $300 million on his Ocean Dreams project, which will have 425 units, a landscaped roof deck overlooking the beach, 35,000 square feet of amenity space with a gym, movie theater, and trolley to shuttle residents to the Stillwell Avenue subway station.

“When you go to Coney Island when the sun is shining, you fall in love,” said Catsimatidis, who first started picking up empty lots for the project in 2005. “I bought the project, and everybody told me, ‘You’re crazy to do it.’”

Red Apple Group has yet to finalize the rents at Ocean Dreams, but Catsimatidis said it would be similar to what he charges for units at his Margo rental building at 180 Myrtle Avenue in Fort Greene and previously told The New York Times that two-bedroom apartments in Ocean Dreams could range from $4,000 to $5,000 a month.

“If you can’t afford it, work harder and move into the next building we build,” Catsimatidis said. “We’re looking for people that know what it’s like to live on the beach and don’t mind spending the extra few dollars.”

Those prices are nearly double the average price for apartments in Coney Island, according to data from NeighborhoodX.

Rents in Coney Island average about $1,500 for a studio, $2,000 for a one-bedroom and $2,500 for a two-bedroom, putting Ocean Dreams at a “significant premium” for the neighborhood, said Valhouli.

But Valhouli said it wouldn’t be out of the realm of possibility for Coney Island to be able to command big rents in the future; some newer studio units in the area are already charging between $2,500 to $2,600.

“It shows you that people are willing to pay the premium not for space but for the amenities,” he said.

Still, King said, landlords need to be mindful that tenants would be shelling out much more than the rest of the neighborhood for units.

“There will be some folks that get in early that could probably make some attractive deals,” King said. “Landlords are going to have to be somewhat understanding and recognize that tenants have taken a little bit of a pioneering attitude.”

But Catsimatidis is hoping that his pitch of luxury beachfront living — which he “guaranteed” will add 10 years to residents’ lives — along with the myriad entertainment options nearby including the Luna Park Amusement Park, Brooklyn Cyclones baseball stadium and the original Nathan’s Famous location will be enough to have tenants come in droves.

Community Board 13 — which encompasses Coney Island, Brighton Beach, Gravesend and Sea Gate — had a population of 122,009 people as of 2017 and a median income of $36,807, according to New York University’s Furman Center. Its poverty rate was 24.8 percent, significantly higher than the citywide rate of 17.9 percent.

The demographics of the neighborhood made the team behind 1709 Surf Avenue commit to keeping the first two phases of the project at varying degrees of affordability before considering market-rate pricing.

“We’re not typically the tip of the spear in terms of pushing the market in neighborhoods,” said Lisa Gomez, the chief operating officer of L+M. “We felt that this was really a market that needed to be built up and stabilized before we started springing other types of affordability.”

L+M jumped into the project, which was being led by Taconic, in 2017, excited by some of the investment going on in the neighborhood already and opportunities for large scale development.

“There’s a limited amount of land where you can build 1,000 apartments and Coney Island is one of them,” Gomez said. “There’s been a lot of investment in Coney Island on the economic development end.”

But that wasn’t always the case. From the late 1800s to early 1900s, Coney Island was one of the world’s most popular resort areas, attracting almost 100,000 visitors a day, according to “A Coney Island Reader: Through Dizzy Gates of Illusion.” It had three horse racing tracks, bathhouses, circus shows, rides, and a boxing arena.

Coney Island’s decline started in 1964 when the popular Steeplechase Park closed after the Tilyou family sold it to developer Fred Trump (father of current President Donald Trump) for $2.2 million, Commercial Observer reported. New York City’s economic issues in the 1970s made the city unable to pump money into the area to keep up with competition from other amusement parks and casinos in nearby states, while an uptick in air travel siphoned off visitors to the beach.

“Coney Island is kind of one of those unique communities where it’s as if time stood still,” said King. “Even as adjacent neighborhoods like Brighton Beach saw an influx of new tenants and an increase in population and local prosperity, Coney Island was always a little bit of its own island.”

Things started to turn around in 2004 when the city unveiled a new $240 million subway terminal at Surf and Stillwell Avenues, New York magazine reported. The next year, then-Mayor Michael Bloomberg launched an $83.2 million Coney Island Strategic Plan to add more attractions, a new community center and improve the infrastructure to the neighborhood to attract private development.

“This plan will preserve Coney’s famed freakishness and fun-loving spirit, while residents and businesses benefit from their neighborhood’s rebirth as a 24/7 tourist and family destination,” said Marty Markowitz, the then-Brooklyn Borough President, in a statement at the time.

One developer already had big plans for Coney Island. In the early 2000s, Thor Equities quietly dropped about $100 million to amass a 12-acre portfolio along the boardwalk, New York magazine reported. Soon after the city’s Coney Island Strategic Plan was announced, Thor’s chairman Joseph Sitt unveiled a plan for a $1 billion resort town with an indoor water park, four-star hotel, shopping, entertainment, and a giant carousel.

“We wanna evoke the same feeling you get when you’re in Vegas,” Sitt told New York magazine about the plans. “It’s exciting. It’s illuminated. It’s sexy.”

Sitt faced fierce opposition from Coney Island’s group of local activists — including groups like Save Coney Island and unofficial mayor Dick Zigun — over his plans.

He also battled with the city to get his ambitious plans approved, eventually selling a 6.9-acre portion of his Coney Island portfolio for $95.6 million in 2009 as the city passed a new rezoning that allowed for more residential developments and high-rise hotels, The New York Times reported.

“Coney Island is a passion project for me as it is close to home,” Sitt told CO in a statement.

In 2018, Sitt put up 21 of his Coney Island properties up for sale for an undisclosed asking price, according to The Real Deal. Sitt said that he wasn’t looking to sell his entire holdings, but gauging interest from others to invest in his holdings.

“With now 18 million visitors from around the world, the incredible foot traffic that Coney Island and Coney Art Walls has attracted over the past few years is extremely exciting and we are looking forward to the future,” Sitt said. “At some point we will be looking for investors to execute Phase 3 of Coney Island with us.”

While Sitt’s full vision for the neighborhood didn’t pan out yet, the city’s investment and rezoning made other developers take notice of the area. And after seeing the success of Muss Development and AvalonBay’s condominium and rental project in nearby Sheepshead Bay, many started to seriously consider Coney Island, said Daniel Lebor, a partner at brokerage TerraCRG.

“AvalonBay was able to sell the market,” he said. The 180-unit lower portion of the building, dubbed Avalon Brooklyn Bay, is dedicated to rentals with prices starting at $2,200 for studios and rising to $5,070. The upper level, dubbed 1 Brooklyn, consists of 56 condos with prices starting at $525,000 for one-bedroom units and climbing to $3.2 million for four-bedroom apartments. The 30-story tower at 1501 Voorhies Avenue started work in 2014 and launched sales for the condo portion in 2017.

“There are a lot of people that have yet to be served in that neighborhood, people who are aspirational and wanted amenities,” said Jason Muss, the president of Muss Development. “You’re getting the Brooklyn connectivity and convenience, but you’re getting an incredible value that you’re not paying the Williamsburg or Manhattan pricing.”

Muss did not give specific details about sales at 1 Brooklyn Bay but said they were “on our way to selling the whole thing” close to asking prices.

Muss Development started developing in Brighton Beach with Oceana in the early 2000s after realizing South Brooklyn had a lot of residents itching to be served with higher-end living quarters, so it was an easy choice to join AvalonBay in Sheepshead Bay, Muss said.

“I don’t think you’re taking too big of a risk when you build in South Brooklyn,” he added.

But at prices new developments are shooting for, it might be a risk for some residents to take the plunge and rent in Coney Island. The average commute for residents in Coney Island is 43 minutes, according to a 2016 report by the Center for an Urban Future, and it can easily take an hour to get to Manhattan. Coney Island has the 21st-longest commute out of the 56 neighborhoods in the report.

What’s key for the new developments in Coney Island is not just that they’re bringing an influx of new residents but adding retailers and jobs that have been missing from a neighborhood that was “designed for people visiting the amusement park,” said Lebor.

The new developments haven’t inked any big name deals yet, just smaller companies like Revona Properties and Unique Plan Management at Neptune/Sixth, and the neighborhood has seen a large increase of vacant storefronts in recent years, the Brooklyn Paper reported.

And, with all eyes starting to point to the People’s Playground, Lebor expects other smaller and larger developments will start to crop up in the area.

Catsimatidis isn’t satisfied with just two buildings in his Ocean Dreams complex and said he has been working with the city on zoning restrictions and other issues to build three more towers in the neighborhood.

“We’re looking for certain help from the city, we got to make it economically feasible,” he said. “I can either spend a billion dollars here or spend the next billion in Florida.”