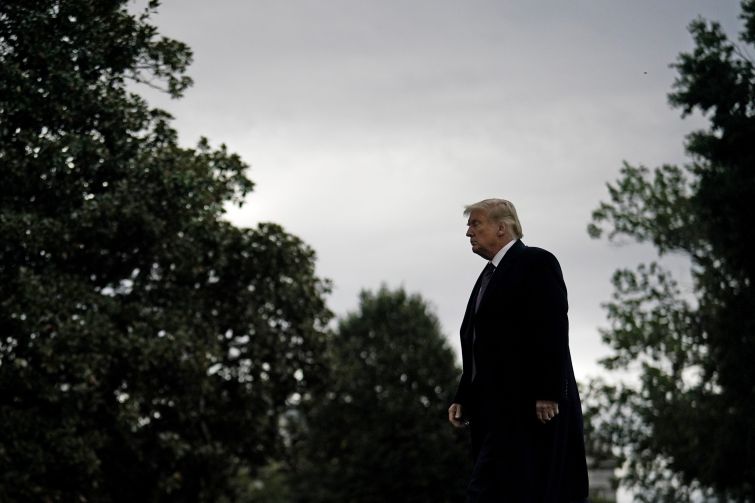 After tonight, not only could President Donald Trump be out of a job in government, but he could be on his way to losing one lender that has bankrolled some of his most prominent real estate assets.

German lender Deutsche Bank is currently surveying ways in which to dump Trump after he leaves office. That would hinge on it offloading from its books roughly $340 million in outstanding debt Trump currently owes the bank, Reuters reported, citing information from three senior bank officials. The bank has supplied Trump with more than $2 billion in debt over the course of their relationship, which began in the late 1990s.

The $340 million in indebtedness marks the full principal amount of what’s owed, as the loans — backed by three of his properties — include interest-only payments, as per Reuters’ report, which cited U.S. Office of Government Ethics filings. The collateral behind the debt includes his Miami golf course, Trump National Doral Miami, and sizable hotels in both Washington, D.C., and Chicago:  Trump International Hotel Washington, D.C. and the 92-story Trump International Hotel & Tower Chicago. The loans are set to mature in 2023 and 2024.

The bank is eager to cut ties with Trump and his company, the Trump Organization, due to the “negative publicity” that comes with doing business with him, per Reuters. Currently, the Manhattan district attorney’s office is investigating Trump and his firm’s business activity, and several associates of the president and his advisers have either been indicted or imprisoned for various crimes the past few years.

Manhattan District Attorney Cyrus Vance Jr. revealed in early August that the scope of the ongoing probe includes possible insurance and bank fraud committed by Trump and the Trump Organization. As part of its sweeping investigation, the DA’s office subpoenaed Deutsche Bank last year in search of financial records that had previously been supplied by Trump and his firm while in the process of securing loans for business ventures. Deutsche complied with the subpoena.

Trump has regularly and publicly shot down any notion of wrongdoing.

Nevertheless, Deutsche has been exploring its connection to Trump as early as 2016, when it put together a working group to review its relationship with the bombastic figure, as per the Reuters report. Now, four years later, one Deutsche senior executive told the news agency that the waves of congressional and criminal investigative scrutiny and bad headlines that have come from being tied to him can be described as “serious collateral damage.”

Adding to the pressure, the bank’s executives fear that should Trump lose the election and the Democrats win the White House, as well as control of Congress, congressional investigations into Trump’s businesses, finances and ties to Russia will be jump started.

Deutsche Bank, which has been one of Trump’s de facto, go-to lenders of sorts during his rather turbulent, tumultuous and litigious career as a commercial real estate developer, is aiming to either sell the loans via secondary market offerings to prospective lenders — a common occurrence amid a down market — or seek repayment, which would more than likely come via a refinance that would effectively sever these existing ties.

The Reuters report cites Deutsche senior officials who said that selling the loans might not be the best option given that they are backed by hospitality assets, which are in the red due to COVID-19.

The officials also told Reuters that while there’s still plenty of time left in the term of the loans to pay them off, it would be easier to foreclose or even take control of Trump’s three assets — should he fail to pay down the loans — if he did not hold public office. If he were to win a second term, the bank would want to stay away from the negative publicity that it would receive for foreclosing or seizing properties from a sitting president and would more than likely extend the loans.