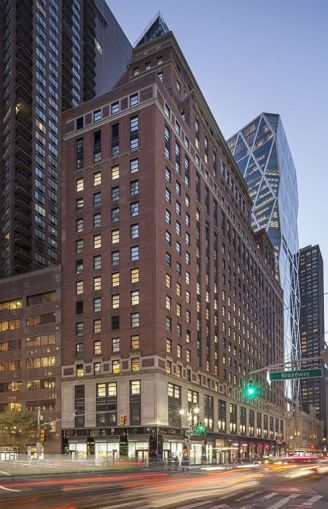 Empire State Realty Trust (ESRT) has nabbed $180 million in commercial mortgage-backed securities (CMBS) debt from Morgan Stanley to recapitalize its office property at 250 West 57th Street and secure some liquidity, according to city records and ratings agency analysis of the deal.

The term of the loan stretches 121 months — all interest only — and pays interest at a rate of 2.83 percent, according to Fitch Ratings analysis of the transaction. The mortgage was originated on Nov. 12.

Morgan Stanley’s underwritten loan-to-value (LTV) ratio of 54.5 percent indicates that the lender values the property at just under $330 million, as per Fitch data.

ESRT’s 26-story, roughly 544,000-square-foot office asset was previously unencumbered by any debt, so the public-traded real estate investment trust landed $164.8 million in equity in the deal, a comfortable sum amid the ongoing uncertainty caused by the pandemic. The remaining loan proceeds paid reserves ($8.9 million) and closing costs ($6.3 million).

ESRT — best known as the owner of the Empire State Building — owns more than a dozen office assets in New York and Connecticut, representing around 9.4 million square feet and 700,000 square feet of office and retail space, respectively.

Its property at 250 West 57th Street was built in 1921 and is located between Eighth Avenue and Broadway, just two blocks from Columbus Circle and Central Park at the northeastern edge of Hell’s Kitchen. It’s also a short walk from the area’s iconic outposts like Carnegie Hall, Time Warner Center and Lincoln Center.

As of its August rent collection, it was 79.7 percent leased out to 42 tenants. One of the strengths of the asset and its tenant roster, per Fitch, is its granular rent roll, as only one of its tenants takes up more than 10 percent of the asset’s rentable space: the American Society of Composers, Authors and Publishers, situated in 87,943 square feet (16.2 percent of the building’s space). Its five largest tenants hold under 45 percent of leasable space and only represent about 52 percent of base rent.

The building has about 67,000 square feet of ground-floor and multi-level retail space mostly used by retailer TJ Maxx, the property’s second largest tenant, which is housed in space spanning the street and second and third floors. The TJ Maxx “was open for business and very busy at the time of inspection,” which was done one afternoon earlier in November, Fitch wrote in its analysis. HSBC and Bank of America have bank branches in the other areas of the retail space, and there’s also a Starbucks, which was closed at the time of Fitch’s inspection.

The asset is on solid footing going forward as 23 leases, making up just 12.6 percent of leasable space, will expire by 2025. Over the course of the loan term, lasting until 2031, about 48.3 percent of the property’s leasable space across 40 leases is slated to expire. And since COVID hit in March, only five tenants making up just 9.5 percent of space have received pandemic rent relief.

Designed by Carrère & Hastings, an old New York-based architectural firm that shuttered in 1929, the former Fisk Tire Building has been renovated by ESRT since it acquired the asset in 2016. A little under $29 million was pumped into the property for a variety of upgrades, which included a lobby renovation; the addition of new windows; and electrical, plumbing, HVAC and security system upgrades, according to Fitch.