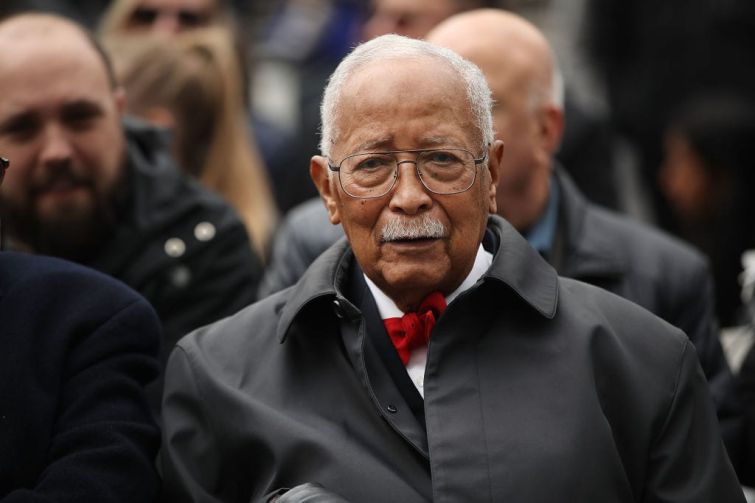 David Dinkins, who became New York City’s first Black mayor when he took office in 1990 but only served one term largely due to his handling of the Crown Heights riots, died on Monday night at 93.

Dinkins’ death comes nearly two months after his wife, Joyce Dinkins, died at 89. He died from natural causes in his Upper East Side home, the New York Post reported.

Dinkins — who famously referred to the city as a “gorgeous mosaic” — helped drive down the city’s then-soaring crime rate by expanding the number of police officers, rehabilitating housing in the outer boroughs, supporting the cleanup of Times Square, and bringing the U.S. Open to Queens.

“David Dinkins simply set this city on a better path,” Mayor Bill de Blasio, who served in Dinkins’ administration, wrote on Twitter. “He was my mentor, he was my friend, and his steadfast commitment to fight for that ‘gorgeous mosaic’ inspires me every single day. We’ll keep up his fight.”

“I extend my deepest condolences to the family of Mayor David Dinkins, and to the many New Yorkers who loved and supported him,” Giuliani wrote on Twitter. “He gave a great deal of his life in service to our great city. That service is respected and honored by all.”

Dinkins was born in Trenton, N.J., in 1927 to Sally Dinkins and barber William Dinkins, The New York Times reported. He lived for a time in Harlem before returning to New Jersey, where he graduated from Trenton Central High School in 1945.

He served in the Marine Corps before he attended Howard University, where he met his wife. He graduated with a mathematics degree in 1950, according to NYT.

The couple settled in Harlem, and Dinkins earned his law degree from the Brooklyn Law School. Dinkins got his start in politics in Harlem when he was elected to the New York State Assembly in 1965.

He later served on the Board of Elections and as a city clerk to Mayor Abraham Beame. Dinkins unsuccessfully ran for borough president twice before finally clinching the post in 1985.

His ascent to mayor came at a time when the city faced a huge $1.5 billion budget deficit and was being ravaged by crack and AIDS epidemics, while the murder rate skyrocketed.

During his term, Dinkins headed to Albany to personally lobby for an income tax surcharge that would finance his anti-crime “Safe Streets, Safe City” program.

Under the program, the city hired a record number of police officers, while the New York City Police Department returned more officers to street patrols. The efforts were a driving force in lowering the city’s crime rates, which continued after Giuliani took office.

Dinkins also convinced Walt Disney Company to invest in the cleanup of the then-seedy Times Square (which Giuliani later claimed credit for) and got the United States Tennis Association to build a complex in Queens in return for a 99-year lease on city land.

However, Dinkins’ legacy is also marked by his mishandling of the Crown Heights riots in 1991, which many point to as the reason he lost to Giuliani.

The riots started after two 7-year-old Black children were hit by a car that was part of the motorcade of Rebbe Menachem Schneerson. One of the kids — Gavin Cato — died from his injuries.

The event sparked three days of rioting in the streets of the Brooklyn neighborhood, where stores were looted; nearly 190 people were hurt; and Yankel Rosenbaum, a Hasidic student from Australia, was fatally stabbed.

A state report later cleared Dinkins of the charge that he intentionally held back the police force during the early days of the riots, but it criticized him for being slow to act until the fourth day of violence.

After his loss to Giuliani, Dinkins served as a professor at Columbia University.

He is survived by his daughter, Donna; his son, David Jr.; and his two grandchildren.