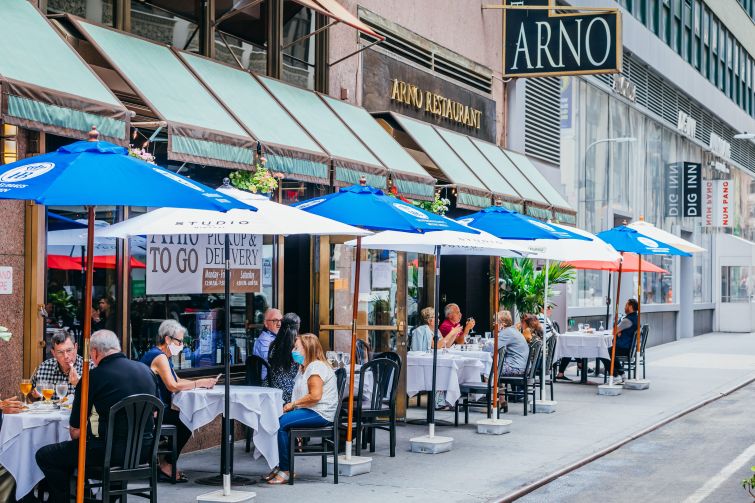 In normal times, New York City’s BIDs (Business Improvement Districts) and neighborhood associations provide vital support for the stores in their area, handling everything from keeping the streets clean to running marketing campaigns to drive customers into local shops.

But when NYC faces a tragedy, such as the crushing health and economic effects of the current coronavirus pandemic, their support becomes even more vital, as they help businesses stay afloat by advocating to the city on their behalf and securing much-needed financial assistance, among other crucial functions.

On the website of the Alliance for Downtown New York (https://www.downtownny.com) — alongside articles about stores, restaurants, green markets and other local resources that are open for business — there is a page titled “Portraits.” Posts published in this section highlight local business owners, city workers, and others who have made life in the city much more bearable during the COVID-19 pandemic.

These salutes are a perfect illustration of the alliance’s deep ties to its community, and a great example of how New York City’s BIDs and neighborhood associations, not only help businesses promote themselves, but serve as spiritual lifelines and connectors for the areas they serve.

“We published profiles of heroes and frontline workers who were putting their lives at risk every day to take care of the rest of us,” said Downtown Alliance President Jessica Lappin. “People working in hospitals, bus drivers, postal workers, drug store employees — these are the people we really counted on. So, we wanted to create special vignettes that celebrated them, and reminded everybody else what essential workers were really doing for us.”

Throughout the pandemic, New York’s BIDs and neighborhood associations have gone above and beyond in helping area businesses stay afloat both materially and, in some cases, emotionally, while keeping their neighborhoods as clean and visitor friendly as possible.

On a practical level, the Downtown Alliance has worked tirelessly to help keep downtown businesses alive.

At the end of April, the alliance announced an $800,000 grant program to help area businesses stay current on their rent payments.

Since then, they’ve paired with a company called Streetsense to train local business owners on how to open, given new norms and regulations, and offered a grant to provide free consultations to 25 area businesses. And after hearing complaints from local restaurants about excessive fees from online ordering apps that were hindering their recovery, the alliance initiated an effort to create a better alternative.

“We’re working with a company called Bento Box to launch a program that will allow our restaurants to have their own easy, online ordering systems for free, and also give these businesses the information they need about their customers so they own that data,” said Lappin.

“He’s been hosting that for us pro bono,” said Lappin. “We’ve been featuring chefs from local places cooking at home and sharing some popular recipes, and that’s been a big hit.”

Promoting local restaurants has been a central task for BIDs across the city, including championing the street closures that have allowed these establishments to offer on-street dining.

“We have joined with our BID colleagues to advocate and argue for the open streets and dining programs. The outdoor dining program is going to change the city’s streetscape forever,” said Alfred C. Cerullo III, president and CEO of the Grand Central Partnership. “This has made a huge difference for so many food establishments and has, I believe, resulted in their survival.”

Cerullo said that 72 percent of his area’s storefront businesses have reopened in some form, and while some businesses have closed for good, most of the remaining 28 percent “look like they could reopen any day now.”

He knows this because the partnership has engaged in extensive communication with businesses in the Grand Central area, doing whatever they could to help these businesses get back to doing what they do.

“We have been doing constant outreach — business by business — to the over 800 storefront businesses within our district boundaries, offering assistance, checking status[es], and listening to issues,” said Cerullo. “Some issues we’ve assisted with include navigating outdoor dining regulations; set up and best practices; providing [personal protective equipment] to small businesses through a program with [the NYC Department of Small Business Services]; and helping to raise awareness of and promote the businesses that are open.”

The partnership has been more than just a supporter of local area businesses, as they’ve made themselves available for more hands-on forms of assistance, leading by example in the quest to save the community.

“We realized that, to be effective cheerleaders for local businesses and to encourage people to return to work, we could not do it from the sidelines or from our couches,” said Cerullo. “Our field staff has been working around the neighborhood as ‘essential workers’ since the beginning of this situation and, since the beginning of Phase 2, when we could return, the administrative and executive staff has been here in the neighborhood with our owners and tenants, doing everything we can to help them through these difficult times.”

The city’s BIDs and neighborhood associations do whatever is needed to support local businesses, including getting creative.

To celebrate the neighborhood’s resilience, the Garment District Alliance unveiled a new marketing campaign called “Stayed in New York,” a nod to the essential workers who remained in the city throughout the pandemic, as well as the returning companies and individuals who are committed to the neighborhood.

“We had window clings and stickers that you put on the ground outside that said, ‘Welcome Back to the Garment District.’ We gave them out for free to all our businesses, and we displayed 100 banners throughout the district with logos of our local companies,” said Garment District Alliance President Barbara Blair.

“In the middle of this, all the articles were about how everybody’s leaving New York, and that was not encouraging. So, we really want people to feel like this is their town. This is their neighborhood,” she added.

This is just one aspect of the Garment District Alliance’s campaign to welcome returning New Yorkers.

This fall, the GDA unveiled “Doggy Bags,” a special exhibition on Broadway consisting of a series of gigantic, playful dog sculptures created by artist Will Kurtz. Inspired by the universal appeal of canine companions, Kurtz used recycled materials to create the colorful, oversized sculptures. The highly detailed forms are blown up to a scale four times their actual size and are constructed with steel armature, recycled single-use plastic bags and duct tape. Each depicts the unique characteristics and personality of a different breed of dog, while the choice of materials provides commentary about the absurdity of waste and the need to recycle.

And with the Department of Transportation placing more importance on public plazas throughout the city, the Garment District Alliance has also established a pop-up dog park, called Broadway Bark Park, on Broadway between 39th and 40th streets, as a way to help people feel more comfortable returning to the area. This park is enclosed by white picket fencing and is equipped with ground covering, chairs, and plantings around the outside. It will be available daily from 8:00 a.m. to 7:00 p.m.

These campaigns will, hopefully, be seen by an ever-increasing number of residents, as Blair said that a lot of her area’s ground floor retail has returned.

“The very first group that came back when the state allowed it was the fashion industry, because they had already missed a whole season — stores returned the collections they had shipped in March,” said Blair. “So, they were really eager to get back to work and start producing so they could ship to stores.”

Restaurants in the area have been more challenging, given the lack of a robust residential population.

“Food’s been difficult,” said Blair. “The eateries are wholly dependent on office tenants, because they’re delis and restaurants and that kind of thing. We have a lot of outdoor cafes, and when DOT started allowing outdoor cafes at the curb line, that was a huge, huge boost for us. It’s been really meaningful. And now, they’re going to allow outdoor heaters and 25 percent capacity indoors. So that’s a big, big boost as well.”

To help ease the burden for eateries, Blair has spent much of her time during the pandemic serving as a conduit between Garment District businesses and the city to secure as much assistance as possible.

“The first thing we did was to be a link to federal, state, and city agencies to determine what kinds of programs are out there that area businesses can avail themselves of regarding how to make them safe,” Blair said.

With the city’s homeless problem growing in the wake of the pandemic, the BIDs have all been engaged in making the streets safe and clean, while also helping homeless residents find some semblance of security.

“We have been doing homeless outreach for many years and made a point of trying to take care of the most vulnerable street homeless in the district well before the pandemic,” said Lappin. “We contract with the Bowery Residents Committee, and we have street outreach teams out every day of the week. We know the homeless. In some cases, we’ve been trying to get them into shelter for a long time. So, we’ve been able to place quite a few of our street homeless, since the pandemic began, into shelters to get them off the street.”

With the end of the pandemic still a ways off, businesses in these areas can take a measure of comfort knowing that the path back to normalcy is not one they have to travel alone, as their local BIDs and neighborhood associations will do whatever they can to ease the journey.

“Midtown East is the world’s central business district,” said Cerullo. “While there may be new ways of doing business over the next year, we know that, with a vaccine somewhere in our near future, the deep need for people to be connected in person, and businesses growing and competing by being more productive and creative, we will see people returning. I see the next year as yet another new chapter in our city’s recovery and reinvention, with our tenants and tourists back in greater numbers, and with an energy to get back to normal that will help our small local businesses thrive.”