The End of Black Friday As We Know It 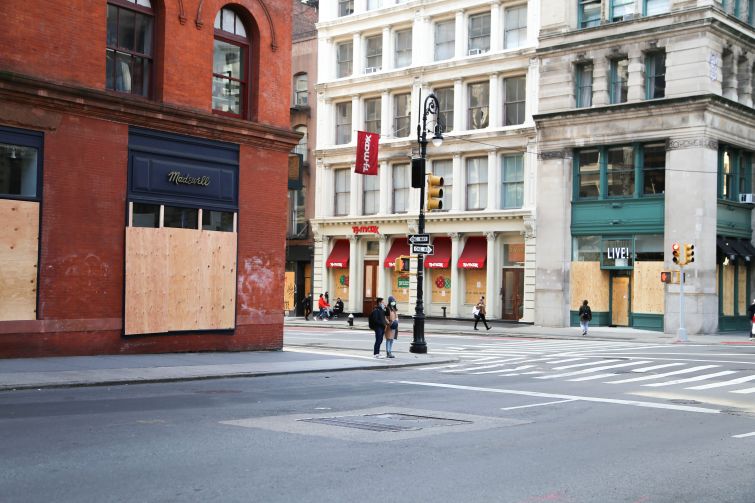 Santa Claus might look a little different this year.

At a mall or shopping center near you, don’t be surprised if your kids encounter a department store Santa wearing a mask. That’s just one of the expected accommodations retailers and mall landlords are making when the Christmas shopping season collides with this year’s coronavirus pandemonium.

Black Friday, the day after Thanksgiving and traditionally the busiest shopping day of the year, and the holiday shopping season that follows are when old-fashioned stores try to max out their sales and justify their existence.

It’s especially crucial for a real estate category that’s struggled all year to compete with rising e-commerce and then the impacts of the virus and the lockdowns implemented by governors in response to it, which robbed the stores of customers. Many retailers are spreading out their Black Friday sales so the flow of customers is more even and controllable this year.

In Manhattan, like in other urban areas, you also had shopkeepers boarding up windows to protect against vandalism during demonstrations over the summer.

For the most part, in the New York tristate area, stores and shopping malls may be open, but that doesn’t mean that consumers will take a chance and go out to them. The pandemic may be just one more reason to stay in and do your Christmas shopping from your couch.

If stores with doors don’t make their numbers this holiday season, we may see another wave of store closures and bankruptcies in retail, which have plagued the industry all year, going back into 2019.

The Freehold Raceway Mall down in Freehold Township, N.J., is an example of a retail property that has suffered some body blows. It lost one of its anchors, Nordstrom, and will lose another, Lord & Taylor, which fell into Chapter 11 bankruptcy in August. The Macerich Co. property also lost a Ruby Tuesday restaurant, a Microsoft store and others. In Manhattan, Lord & Taylor’s longtime flagship, bought by Amazon, is being converted into offices for the e-commerce giant.

Up Route 9 in Woodbridge, the sprawling Woodbridge Center Mall, a destination shopping mecca for a lot of New Yorkers, never mind New Jersey residents, lost a Sears and a Lord & Taylor, and is down to three anchors: Macy’s, JC Penney and Boscov’s. Macy’s is struggling financially and JC Penney was rescued from Chapter 11 by Brookfield Property Partners LP, which owns the mall, and Simon Property Group, the world’s largest retail REIT. It also lost a Modell’s Sporting Goods, as it filed for Chapter 11.

Soozan Baxter of Soozan Baxter Consulting, which helps design retail and hospitality environments, said she expects that tradition will draw holiday shoppers to physical stores. People who have been cooped up all year will embrace their holiday traditions with a vengeance, she said.

“Part of shopping for the holiday is about tradition,’’ Baxter said. “When you look at movies like Miracle on 34th Street or the more modern Hallmark movies, shopping is very much embedded into the American fabric of our holidays. The tradition is time-honored. The customer is driven to want to have those experiences.”

Nevertheless, a whopping 45 percent of Americans plan to do most of their holiday shopping online, according to a study by Alix Partners, a global business consulting group, up from 30 percent last year. Only about half of potential customers plan to visit stores even to browse merchandise for later online purchases.

The virus and what people do to avoid it has sped up the move to e-commerce, said Joel Rampoldt, a managing director at Alix. And New York-New Jersey-Connecticut consumers, who have been hit with anti-virus restrictions since March, are particularly susceptible to avoiding physical stores.

Governors of all three states issued stay-at-home orders, which had the effect of closing malls and stores. They have since relaxed such orders, but requirements to wear masks and to socially distance remain.

“We got hit the hardest, and we got hit first,” Rampoldt said. “We’re more acutely aware of the danger, and more focused on (self-protection).“

In keeping with the iconic words of Yogi Berra, “nobody goes there, it’s too crowded,” Rampoldt expects that New York-area shoppers will avoid places they associate with crowds, and that could include suburban malls and Manhattan shopping drags. Without naming names, he expects there could be another wave of retail bankruptcies and store closures in January.

In attempting to hold off the rise of e-commerce, many retailers and mall operators have turned to live events, and filled empty spaces with restaurants and gyms. Lockdowns took dead aim at those very businesses.

The Neiman Marcus flagship store that was supposed to anchor the Hudson Yards project, which shut down last summer, was designed with e-commerce in mind, Rampoldt said, with food classes, bars and restaurants and other things you can’t do at home. Yet it closed for good about 16 months after its March 2019 opening as the Dallas-based department store chain filed for bankruptcy with more than $4 billion in debt.