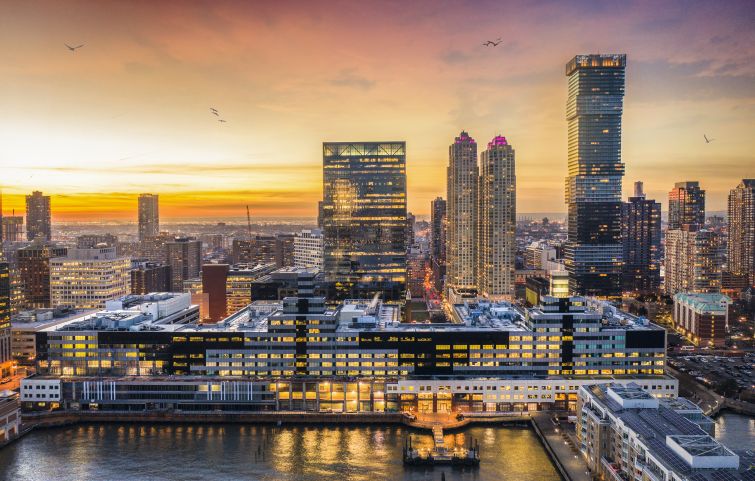 Rockefeller Group veteran Edward Guiltinan — who recently leased up the landlord’s redeveloped 1271 Avenue of the Americas — was hired by Mack-Cali Realty Corporation as the head of leasing, Commercial Observer has learned.

Guiltinan will become the senior vice president for leasing at Mack-Cali. He will focus heavily on filling up the 4.5 million-square-foot Harborside office campus on Jersey City’s waterfront, which has plenty of vacancies after the company started a $75 million renovation of the development in 2018, according to Mack-Cali.

Before taking the post at Mack-Cali, Guiltinan spent 20 years at Rockefeller Group, where he was the firm’s head of leasing in New York. He recently completed the leasing of 1271 Avenue of the Americas, which Rockefeller Group started a $600 million upgrade to in 2015 after anchor tenant Time Inc. left, nabbing tenants like AIG and MLB. He also closed on a 16,900-square-foot deal in the building with Greek eatery Avra Estiatorio in the middle of the coronavirus pandemic.

“We thank Ed for his many years of service and strong contributions to our leasing program in New York, and we wish him continued success,” Bill Edwards, executive vice president and head of core holdings for the Rockefeller Group, said in a statement.

“Both Ed and Rob bring unmatched experience and knowledge in their respective areas of work, which puts us in the best position to complete the transformation of Harborside and help attract tenants and win business as companies return to the office with a new list of requirements and considerations,” Gilmartin said in a statement. “Companies today are demanding more control of every aspect of the work ecosystem, and Harborside is one of the only true campus destinations that provides that comfort and is accessible from around the region.”

The new hires are part of a push from Gilmartin — who took over as interim CEO in July after former CEO Michael DeMarco was ousted by Mack-Cali’s board — to turn around one of New Jersey’s largest landlords.

In an interview with CO last month, Gilmartin said her goal was to quicken the pace of Mack-Cali’s strategy to sell off suburban office holdings to shore up its balance sheet while it focuses on multifamily and office properties in higher-density waterfront areas like Jersey City and Weehawken.

She said a large focus for her will be the Harborside campus, and she tapped legendary CBRE broker Mary Ann Tighe to help oversee a New Jersey-based team to lease up the property.

“I think it’s probably the most underrated piece of commercial real estate in the region,” Gilmartin told CO about Harborside. “Repositioning Harborside as a campus on the Jersey City waterfront when we all go back to the office is a major, major priority of mine.”

The CBRE team for Harborside will be headed by Mark Ravesloot and will include Peter Turchin, Jeffrey Babikian, Robert Norton and Brett Shannon, according to Mack-Cali.

CBRE will help Mack-Cali start a new marketing strategy for the campus that will include pitching its price savings to Manhattan tenants.

“This isn’t one of these cases where you go and say ‘It needs everything,’” Tighe previously told CO. “You don’t have that reaction at all. You have the reaction that this is a very under-appreciated asset and MaryAnne has a very clear vision of what to do.”

Aside from Guiltinan and Willis, Gilmartin has also tapped Forest City and MAG Partners vets Ashley Cotton and Adam Greene to join Mack-Cali. The new hires haven’t come without some pain and last month Mack-Cali laid off about 20 people on its nearly 300-person staff, as CO previously reported.

Investment firm Bow Street started a proxy battle at Mack-Cali in 2019 to install more members on its board and in mid-March called for the resignation of DeMarco writing, “It is now clear that the rot at Mack-Cali goes far deeper than any of us knew and that more comprehensive action is required to protect shareholders’ investment.”

DeMarco left in July and Gilmartin was tapped as CEO for six months while continuing to run her own firm, MAG Partners.