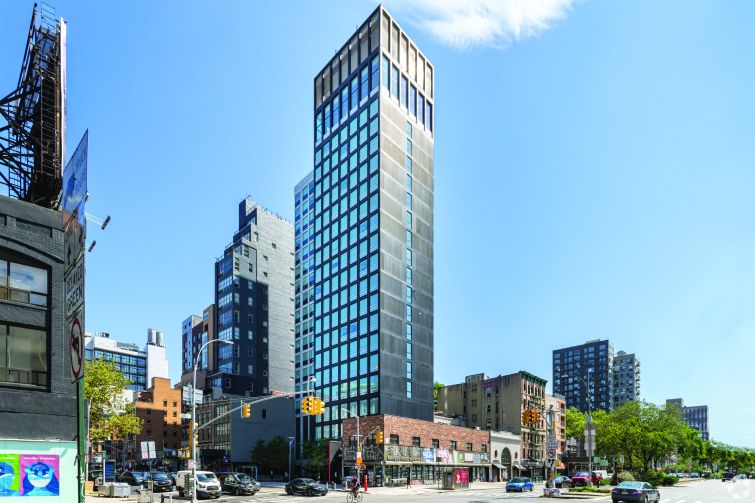 REMOTE RESCUE: The citizenM hotel in the Bowery is betting on interest from workers who need to be in the city only a little bit at a time. Courtesy of Costar Group.

The entire New York City hotel industry is struggling amid the coronavirus pandemic. That includes Midtown South, where many smaller boutique hotels are scene-making destination spots in, and of, themselves. With tourism way down, surrounding attractions closed or curtailed, and the city’s normal pulse at a slow beat, these inns can face greater challenges than others around town.

That wider scene is bleak. For the week ended Oct. 10, occupancy across New York City hotels was just 38.5 percent, and RevPAR (revenue per available room, a standard industry metric) was down 78.7 percent annually.

But even that’s not the full picture.

According to Vijay Dandapani, president and CEO of the Hotel Association of New York City, those figures don’t account for the nearly 200 hotels that are closed, and roughly 140 that have been turned into homeless shelters. With those in the mix, occupancy is under 10 percent.

“They’re all dead, nothing’s happening, the rest of the year is a complete washout,” Dandapani said. “I don’t see any pickup until June of next year. Many hotels say they won’t open until April next year; some say they may never reopen.”

Even the most recent stats, though, don’t completely convey the supply-and-demand crisis confronting the lodging industry. STR’s Jan Freitag said there are roughly 18,000 hotel rooms under construction right now across the five boroughs (“earth is moving, shovels in the ground, high likelihood they’ll open”).

Since the pandemic first hit New York City this past spring, the turnaround in the travel business has been especially head-spinning for Midtown South hotels. The submarket includes a large cluster of more specialized properties that carry elevated operational costs. That was fine when they were near capacity nightly, as well as drawing locals and tourists to their bars and restaurants. Through 2019, New York’s hotel industry had rode a record-setting, decade-long RevPAR growth cycle, and the city was regularly setting tourism records.

Within a day of the city announcing its first coronavirus restrictions in March, Dandapani said occupancy dropped from 90 percent to 15 percent, and has pretty much been in the single digits ever since.

Seasonal events, such as the United Nations General Assembly or U.S. Open, he said, would bring $20 and $15 million, respectively, to the industry. This includes Midtown South hotels, which are near the United Nations in Turtle Bay and subway lines that can take fans to the tennis tournament in Queens. Total daily room revenue in October is usually $28 million to $29 million. Now it’s just $5 million.

“Twenty-four million [dollars] a day has just gone poof,” Dandapani says. “It’s not like the airlines; we can’t reduce our inventory. There’s a threshold when it’s cheaper to keep a hotel closed than open.”

How does the hotel industry in Midtown South survive this existential challenge? While some hoteliers and analysts have talked about adopting new strategies, for the most part, it’s a slow, excruciating waiting game. Andrew Rigie, executive director of the New York City Hospitality Alliance, said it’s a “dire situation,” worsened by not knowing when millions of tourists may flock to the city again.

“The desire for travel is there,” Dandapani said, sounding a rare note of optimism. “Once you get past the threat the disease poses, people are going to come back.”

Different Midtown South hotels have tried different strategies. The NoMad reopened Sept. 3, for instance, with service on its rooftop restaurant. The Freehand remains open. The Redbury is closed and will reopen on March 1. The Made Hotel has resumed service and offers $25-a-day coworking in the lobby with free coffee, while the Ace Hotel has suspended operations.

But one commonality is that the hit that came when Gov. Andrew Cuomo applied the 14-day quarantine order to domestic travelers. Dadapani said the industry was “just starting to show signs of life” when the quarantine regulations, which currently apply to 36 states, “killed our business.”

While the entire sector is suffering, Freitag said there’s a big difference between different tiers of hotels. Limited-service venues can adjust staffing, and don’t have food and beverage expenses to handle, or lost meeting and convention revenue to recover. Full-service hotels built around corporate demand have been battered. Those are less common in Midtown South, though, than in Midtown.

In the wake of uncertainty, and no clear date on when crowds may begin to return — STR forecasts that 2019 visitor numbers won’t return to New York City until 2025 at the earliest — there’s conflicting thoughts on ways to reposition hotels to survive a prolonged downturn.

Dandapani said that alternative uses, such as turning hotel rooms into the equivalent of private office spaces, or trying to market to the staycation crowd, aren’t working. “Staying in the lap of luxury for a few nights is a pale imitation of what it once was,” he said.

Others see alternatives that, while far from recouping the substantial lost revenue, can, at least, stem the bleeding. Rigie said propping up hotel restaurants and bars with stipends or a public awareness campaign will have the added effect of bringing back activity to the surrounding neighborhoods in Midtown South.

Ernest Lee, head of development and investments at citizenM, a boutique Dutch hotel chain with locations in Times Square and the Bowery, said he believes hotels need to at least rethink their business model in the short term in response to semi-permanent shifts in how and where people work.

His company is betting on remote work and is rolling out two new subscription products meant to appeal to a post-pandemic workforce. The first, a corporate package that includes a certain number of room nights, as well as meeting space and coworking, is courting a distributed workforce looking for occasional opportunities to meet in person. Lee said that citizenM has already tested the idea with a few firms since mid-September.

“This is a slightly different role for hotels, as an office and workspace, as opposed to pure accommodations,” he said. “This is for the freelancers, the lawyer who lives in Hudson Valley and has a client in Manhattan.”

CitizenM is also trying a $1,500-a-month passport that allows guests to stay in any of its 21 hotels globally. The utility of this concept during global travel restrictions is understandably limited. But, with some international travel restrictions beginning to lift, Lee said he does see a niche market forming around remote workers who want to enjoy the freedom to travel.

Such moves are stopgaps, though. What about the long-term prognosis for Midtown South hotel owners if revenue doesn’t recover by next spring?

STR’s Freitag said he believes that, while there may be sales, closures aren’t a sure thing. Many owners may wait, take a hit on equity, and get out from under loan payments, he said. The pre-COVID-19 streak of RevPAR growth means a good number of owners may be in the black already and are “playing with house money,” so they won’t get wiped out.

“We’re not big subscribers to the idea that a large majority of hotels will close,” he said. “We do believe there will be ownership changes.”

Dandapani believes that inventory will inevitably disappear, including turning hotels into rentals — despite the current financing challenges of such a move — or even transforming them into homeless shelters on a permanent basis.

There’s a sense that owners are just waiting out the winter and hoping for a quick shift back to some kind of normal.

Rigie believes that non-hospitality companies in Midtown South and state and local leaders need to make greater commitments to the area; they need to support local businesses and be cheerleaders. One hotelier said that he and other owners feel adrift, without any sense that there’s some kind of plan to support them. (Other Midtown South hoteliers declined to comment on the challenges they’re confronting.)

“Why aren’t leaders encouraging more safe business?” he said. “None of us understand it. There will be no city left if they don’t do anything soon.”