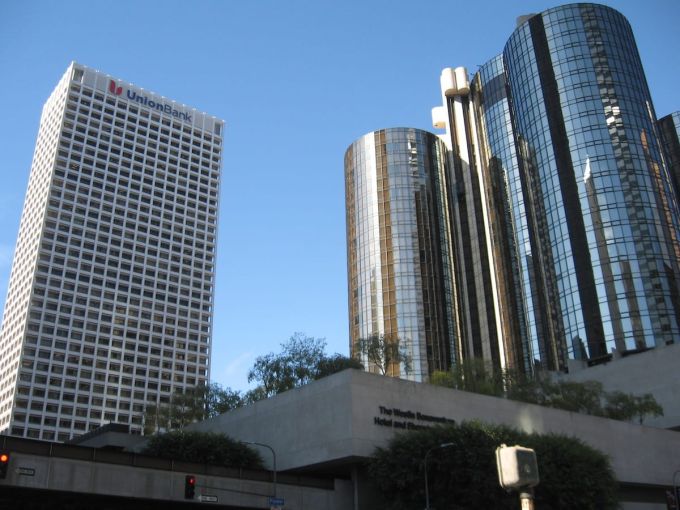 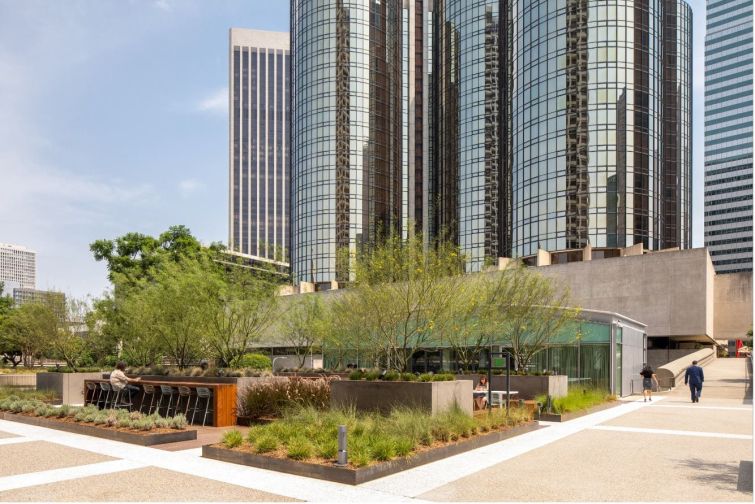 The tower and plaza take up an entire city block. photo: KBS
Previous Next

KBS Realty Advisors has completed the first phase of the $20 million renovation of the Union Bank Plaza office tower in Downtown Los Angeles.

The 40-story, 701,888-square-foot tower and its retail plaza span a full city block at 445 South Figueroa Street in the Bunker Hill area. KBS REIT II has owned the property since 2010, when it acquired the building from Hines for $208 million, property records show. In 2018, Bank of America provided $500 million in financing for the property.

KBS started the renovations in July 2019, a couple years after RC Acquisitions backed out of a $280 million deal for the property, according to media reports. In the first phase, KBS and contractor Swinerton Builders completed interior and exterior upgrades to the conference center and lobby, and embarked on a spec suite program, in which tenant suites were built out without a committed tenant.

In the next phase, KBS will also include a reimagined two-story retail level, which includes 24,833 square feet and an outdoor seating area, which is scheduled to be completed in April 2021. The architecture, interior design and landscape design services for the property’s repositioning were provided by HLW International LLP.

About 252,000 square feet, or about 37 percent of the office space, is vacant or will be soon, according to online listings for the property. Last year, Union Bank renewed its lease for some 162,000 square feet; however, the bank previously was signed to more than 300,000 square feet. Justin Collins, Pete Collins and Brittany Winn from Cushman & Wakefield are the leasing agents. They weren’t immediately available for comment.

The property was built in 1967, and recently became the first skyscraper in L.A. to be designated as a historical landmark by the city of L.A. in February. It was originally designed by New York-based Harrison & Abramovitz and L.A.-based A.C. Martin & Associates. The modernist-style outdoor plaza was designed by Garrett Eckbo.

As a private equity real estate company and an SEC-registered investment adviser, KBS and its affiliated companies have completed approximately $42 billion in transactions.

Correction: This story has been corrected to show that KBS Realty Advisors is completing the renovation of Union Bank Plaza. It previously stated KBS Capital Markets, a different entity.