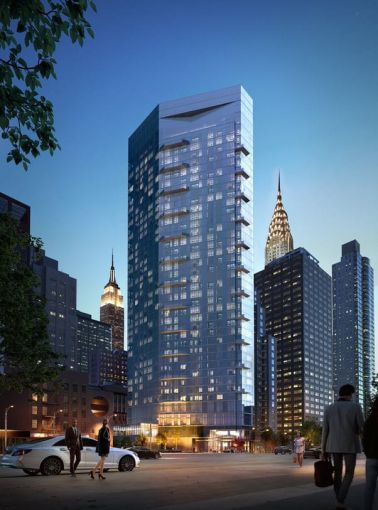 The 10-year, fixed-rate permanent loan retired about $251 million in construction debt from Bank of China that was originated in 2015.

“Despite the current headwinds facing the New York City multifamily market, Greystone and Freddie Mac delivered a market-leading execution and worked tirelessly with us to close this loan in the midst of a global pandemic,”  Lloyd Goldman, founder and president of BLDG, said in a statement.

The 429-unit property rises to 43 stories at 222 East 44th Street, with the lobby standing as tall as three stories. and comprises 441,000 square feet, according to data from CoStar Group. The average unit size is just over 830 square feet and each floor spans about 9,000 square feet. There is also 2,300 square feet of retail space, per CoStar.

The tower — designed by Handel Architects — features 320 market-rate units, 22 affordable residences for income levels at or below 120 percent of the area’s median income (AMI), 44 are set at 60 percent AMI and 43 are set at 40 percent, per information from Greystone.

Summit NYC also has a “Club Level” amenity package, which includes a tech lounge, conference rooms, a children’s playroom, a gaming lounge with billiards and foosball, a golf simulator, a theater and a backyard area with a sundeck, a playground, barbecue stations and a fireplace, according to the property’s website. Additionally, it features an area called “The Arena,” which includes a fitness center, personal training rooms, squash and basketball courts, locker rooms, a spa area with a sauna and an 18-meter heated indoor lap pool.

Freddie Mac’s vice president for targeted affordable housing, Steve Johnson, said he was “proud of our continued efforts to support affordable housing in New York City” and lauded those involved in closing this financing for “increasing the amount of affordable rental units in an area that critically needs it.”

Monthly rents at the location range from around $3,300 for studios to north of $10,000 for two-bedroom units with a terrace, as per information from the property’s website. There is also a three-bedroom penthouse unit with a monthly rent of over $21,000.