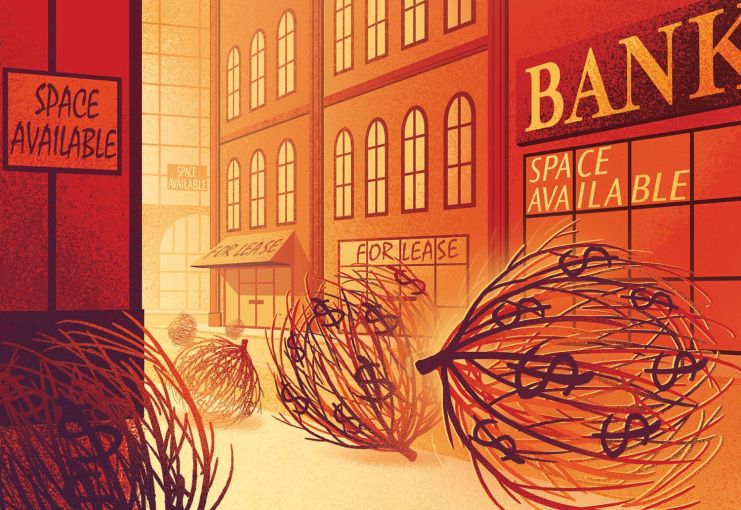 When Jordan Belfort (played by Leonardo DiCaprio) has lunch with his new colleague in The Wolf of Wall Street, it’s a quick induction into the dizzying world of excesses he’s just entered.

Matthew McConaughey, as Mark Hanna, begins by thumping his chest and humming, while Belfort looks around the dining room uncomfortably. Hanna then snorts cocaine, orders endless rounds of martinis, and instructs his protege in the art of investment banking. “It’s a whazy. It’s a woozie. It’s fairy dust. It doesn’t exist. It’s never landed. It is no matter. It’s not on the elemental chart. It’s not f—ing real,” he says.

Belfort declines both the cocaine and the martinis.

“It’s his first day on Wall Street,” Hanna tells the waiter. “Give him time.”

That was 1987, when being on Wall Street meant something; when it still meant the narrow corridor that cuts across Manhattan; where bankers, traders, analysts and brokers walked in and out of the headquarters of JPMorgan or Bank and New York, Salomon Brothers and Brown Brothers Harriman, working their financial magic.

“There was a time when, if you worked on Wall Street, everyone wore pinstriped suits, wing-tip shoes, white shirt, French cuffs — that was the uniform you would see, from institution to institution,” said Bob Goodman, an executive managing director at Colliers International, who has worked as a Financial District broker for 38 years.

But things have changed. The last major bank on Wall Street is leaving the storied street. Deutsche Bank announced in 2018 that it would exit its current headquarters at 60 Wall Street and consolidate its workforce at the Time Warner Center in 2021.

The coronavirus pandemic has accelerated the timeline. The bank recently informed its employees that they would not be asked to return to 60 Wall Street and could wait until July 2021 to return to the office, when the Columbus Circle location opens, according to an internal memo shared with Commercial Observer.

“We’ve gone from Wall Street as a physical address to a label,” Goodman said.

Some specific teams have been recalled to 60 Wall Street, and it remains open for employees who wish to return, but the office won’t fully reopen, even if a vaccine were to become available prior to the opening of the Deutsche Bank Center at the Time Warner Center, which is expected to extend until 2022, according to an internal FAQ viewed by CO. (Deutsche Bank did not provide comment on its return-to-office strategy.)

Deutsche Bank’s exit marks the end of an era, but one that has been slowly ending for decades, according to Frank Wallach, a senior managing director of research at Colliers, who focuses on the Financial District. Banks began leaving Wall Street in the decades after World War II, when technology had made proximity to the New York Stock Exchange unnecessary, and Midtown was flourishing with its forest of modern skyscrapers and better access to the suburbs, where the banking executives increasingly lived.

Citigroup was the first to decamp, moving its headquarters from Wall Street to 399 Park Avenue in the early 1960s. It was also one of the last to leave, as it maintained a presence on Wall Street until last year, when its investment division exited 111 Wall Street, leaving a 900,000-square-foot hole at the 24-story building. (Wafra Capital Partners and Nightingale Properties bought 111 Wall Street in 2019, and the two are seeking $860 million in financing to underwrite a massive renovation effort, CO recently reported.)

The exodus never really stopped, but a Wall Street address continued to have a cache through the 1980s and 1990s, the way Madison Avenue once did for advertising firms and Fifth Avenue for retail.

Wall Street, then, was already more of a concept than a physical destination by the turn of the century, and the cataclysmic events of 9/11 cemented that. Soon afterward, the Financial District began to transform itself into a mixed residential and commercial neighborhood, as many of the historic buildings were converted to rentals, condominiums and hotels — with Wall Street a prime example.

Every building on the south side of Wall Street, beginning at Trinity Church on Broadway to Water Street, has been converted to residential or hospitality. “In walking up and down Wall Street, at times, I have to remind myself that this was a strict business street,” Goodman said.

It begins with One Wall Street, an Art Deco landmark designed by Ralph Walker, and built in 1931 to serve as the headquarters of the Irving Trust Company, a major 20th century bank. Irving Trust occupied the building until 1988, when the Bank of New York (now the Bank of New York Mellon) acquired it and made it its headquarters. The new owner remained at the 50-story building until 2015, when Macklowe Properties — of 432 Park Avenue fame — acquired it with the plan to convert it to luxury rentals. The makeover is currently underway, complete with a Whole Foods planned at its base, and is scheduled to be completed in 2021.

“Whoever thought we would have a Whole Foods at this iconic address?” Goodman said.

As the city’s oldest bank, the Bank of New York’s history on Wall Street goes back much further. The institution had its headquarters at 48 Wall Street, starting in 1797, though the current structure is the third one built on the lot since then. In 1998, BNY left 48 Wall Street and consolidated at One Wall Street. Since 2018, its headquarters have been at 240 Greenwich Street, previously known as 101 Barclay Street.

By the time Deutsche Bank arrived on the scene in early 2003 with 5,500 employees, Wall Street, as a street, didn’t have the same allure as it once had, and Downtown was still suffering the aftermath of the 9/11 attacks. “Downtown was still a complete construction zone,” a former Deutsche Bank employee recalled, and few people ventured down there unless they worked there. “When we got down there in ‘03 or ‘04, we could never get anyone to come down to Stone Street, so it was just us going there.”

JPMorgan had built 60 Wall Street as its headquarters in 1988, which makes it one of the newest buildings currently on Wall Street. JPMorgan then sold the building to Deutsche Bank in 2001 for $600 million, after merging with Chase and moving its headquarters to 277 Park Avenue. In 2007, Deutsche Bank sold the 47-story skyscraper in a sale-leaseback agreement to Paramount Group for $1.1 billion.

In the last several years, Deutsche Bank has faced severe headwinds due to a number of factors including, but not limited to, the continuing fallout from the Great Recession and its relationship with President Donald Trump. The bank announced in 2019 that it would refocus on its home base in Germany, and embark on a cost-reduction plan that would include the layoffs of 18,000 employees and the shrinkage of its New York footprint. The company has, so far, laid off roughly 8,000, but paused terminations during the peak of the pandemic.

With so much space opening up on Wall Street, the area will likely continue to see a diversification of its tenant base, said Colliers’ Wallach, especially since the renovated 111 Wall Street and 60 Wall Street’s large floor plates will both compete with newer product. “It’s very rare for Wall Street to have that type of competing product,” he said.

Goodman agreed. “It’s highly likely that there will be a non-financial firm that will become a signed tenant,” he said. “That will help to further transform the way we think about Wall Street moving forward.”

And that’s a good thing, Goodman added, as the Financial District’s complete reinvention over the last two decades has made it better equipped to weather this crisis. “Wall Street has a much different complexion, which I think bodes well for the long-run,” he said. “It provides a dynamism that wasn’t there before.”

Now, that dynamism is being put to the test. Not only on Wall Street, either. With offices still largely vacant, the commercial corridors in Manhattan are hurting. That’s prompted some banks to take a less laissez-faire approach than Deutsche Bank in returning to the office after the city shut down in order to contain the coronavirus pandemic.

As the pandemic enters its third quarter, and New York faces the likelihood of a second wave, financial companies are responding to the constantly changing situation through different strategies.

Unlike tech companies, many of which have made no plans to return to the office until mid-2021 at the earliest, some banks are ramping up their back-to-office plans, and in many cases, senior management is returning to the office voluntarily. In-person meetings and conferences are also resuming with precautions.

At JPMorgan Chase, which has had its offices open since June, the company instituted a rotational strategy capping capacity at 50 percent, according to a company spokesperson. Currently, about 25 percent of New York staff are working from their offices, the spokesperson said.

The 61,000 employees at the corporate and investment bank will rotate between working remotely and working from the office, in a move that will remain “more or less permanent,” Daniel Pinto, JPMorgan Chase’s co-president and chief operating officer, told CNBC.

Wells Fargo, on the other hand, is taking a less proactive approach throughout its offices nationwide. “Through at least Dec. 1, we will continue with our current operating model, which includes about 200,000 employees working from home, and maintaining safety measures in locations that remain open,” Kelly Reilly, a company spokeswoman, said. “We do not yet know when we’ll return to a more traditional operating model.”

Back at 60 Wall Street, Deutsche Bank is allowing employees to return on a rotational model, for those who do choose to return, with employees coming in either Monday and Wednesday, or Tuesday and Thursday, according to one Deutsche Bank staffer.

For those who don’t choose to return to 60 Wall Street, one day in the future, they’ll be back to clear off their desks, pack a box, and maybe stop at Harry’s for one last cocktail as a Wall Street banker.