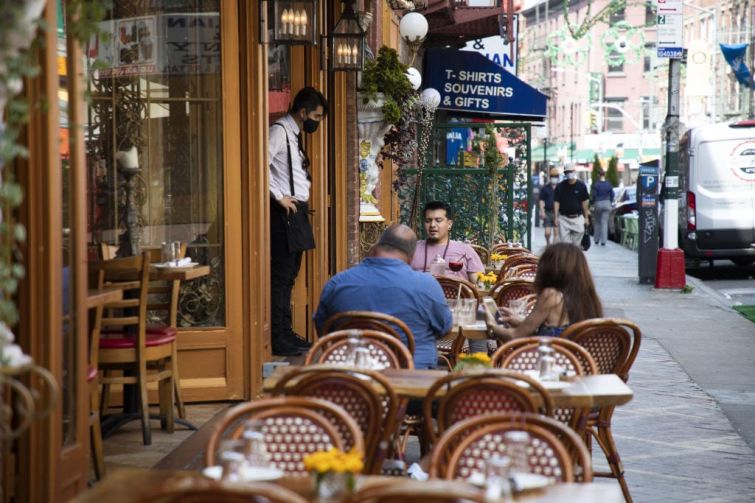 The hospitality industry in the New York City area lost more jobs—440,000—than any other job sector over the past year. Photo: Wang Ying/Xinhua via Getty

The leisure and hospitality industry has lost more jobs than any other sector in the New York City metro area during the coronavirus pandemic, according to numbers that the federal Bureau of Labor Statistics released yesterday.

The restaurant, bar and hotel industry saw a decline of 439,800 jobs, or 43.9 percent, from July 2019 to July 2020. That compares to a 24 percent loss in hospitality jobs nationwide during the same period.

The news comes just as a restaurant trade association reported that two-thirds of restaurants in New York State may close by the end of the year unless they receive substantial government aid.

The New York area’s transportation, trade and utilities sector lost 200,000 jobs over the past year, while professional and business services declined by 185,000 jobs. There were also 151,000 government jobs lost throughout the region, and 150,900 educational and health services jobs. Retail trade jobs slid by 94,700.

The New York area had the fastest rate of job loss among major metropolitan areas in the country during the pandemic, followed by Boston, the BLS said.

All told, the New York-New Jersey-Pennsylvania metropolitan area lost 1.4 million nonfarm jobs, or 13.6 percent of its total nonagricultural employment, over the past year. There are currently 8.6 million jobs in the tri-state area, which is the lowest reported total since 2011, the federal agency noted.

New York City’s metropolitan statistical area extends far beyond the five boroughs; it encompasses Long Island, much of central and northern New Jersey, one county in Pennsylvania, and much of the Hudson Valley in New York.

Although New York City has struggled, the Jersey Shore appears to be hurting even more. Atlantic City-Hammonton, N.J., reported the country’s second-highest unemployment rate of 24 percent in July, along with the largest year-over-year unemployment increase—19 percentage points—of any metro area in the U.S.