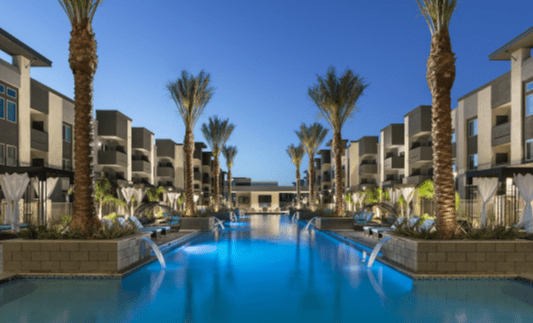 The U.S. Department of Housing and Urban Development (HUD)-backed construction loan goes toward Miami-based HTG and Scottsdale, Ariz.-based Treger’s $71 million project, which will be HTG’s second “Aviva”-branded property — the first one was built in Mesa, Ariz. HTG is one of the country’s largest affordable housing developers.

It will be erected on a 16-acre site at 4175 North Falcon Avenue and will include a mix of 11 two- and three-story buildings as well as a clubhouse, according to Dwight. Altogether, the physical buildings themselves will span nearly 333,500 square feet, according to Treger’s website.

Construction on the gated community is slated to be completed in the summer 2022, with the first wave of residences being delivered to market in September next year, according to a recent report on the development by AZ Big Media. The project will include a wide range of fitness and recreational amenities, including two swimming pools, a fitness center with a boxing gym and a yoga and spin studio, a dog park, a dog agility course, a basketball court and a children’s playground, as per information from Dwight. There will also be multiple courtyards throughout the development, and it will offer self-storage compartments for its tenants as well as  43 covered parking garages and multiple carports and four electric car charging stations.

Aviva Goodyear — designed by Eric Miller Architects — will offer one-, two- and three-bedroom residences, according to Treger’s website, which lists the name of the roughly 692,600-square-foot site as “Harmony at Goodyear.” The unit count will be 104 one-bedrooms, 168 two-bedroom units and 16 three-bedrooms, according to Treger, and the firm also indicates on its website that the property will have close to 13,000 square feet of retail space.

The property is just a few blocks from the local Millennium High School and Western Sky Middle Middle School as well as ample park space, a golf course and a range of shopping and dining options, including a Walmart, a Safeway supermarket and a Walgreens.