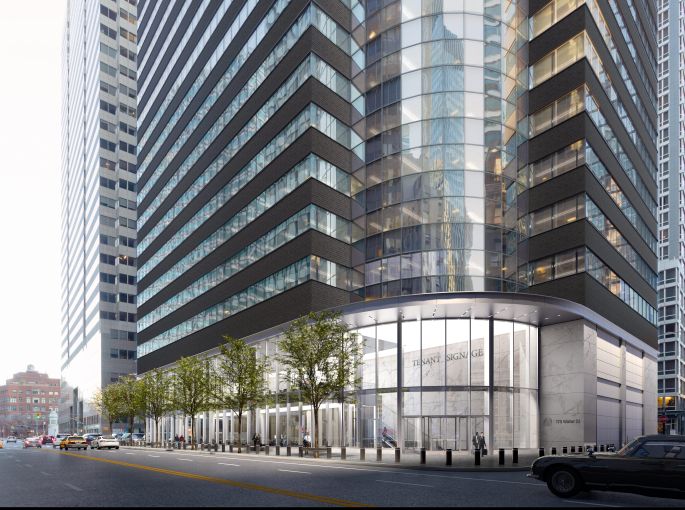 The postmodernist office tower at 175 Water Street is being completely revamped by Metro Loft, which purchased it last year. Image: Gensler 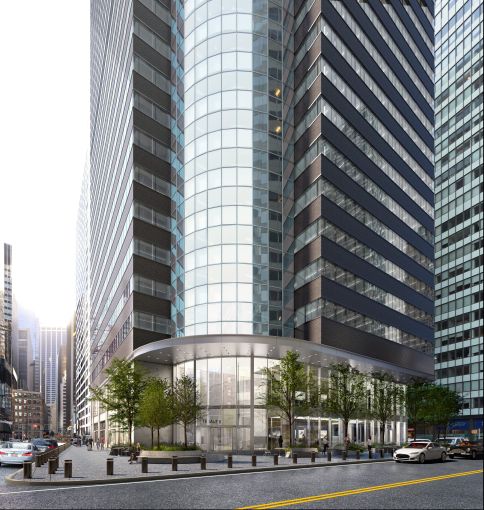 The building's distinctive columns are being wrapped in glass, which will add several thousand square feet of interior space to the first two floors and eliminate much of the traditional ground-floor retail. Image: Gensler 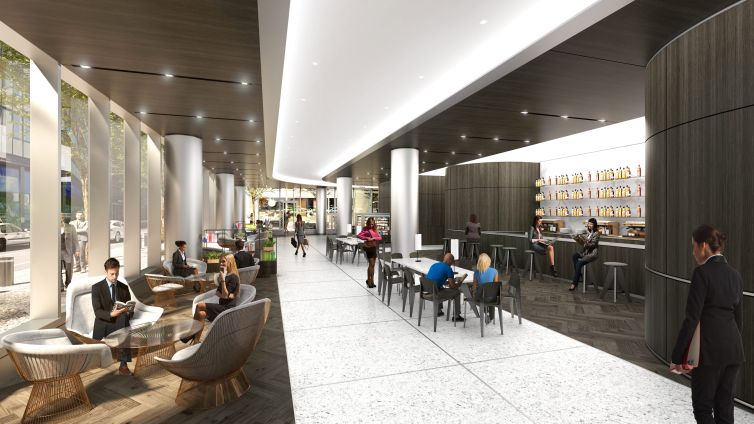 The new lobby will include a cafe and market-style retail stalls, as well as publicly accessible seating. The ground floor is a privately-owned public space. Image: Gensler 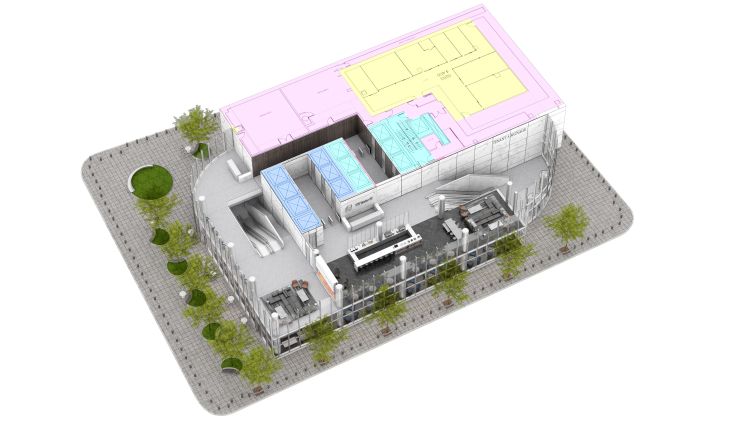 Architects from Gensler had to present the planned landscaping for 175 Water to the City Planning Commission, which recently changed the ground-floor zoning on Water Street to make it more pedestrian-friendly. Image: Gensler 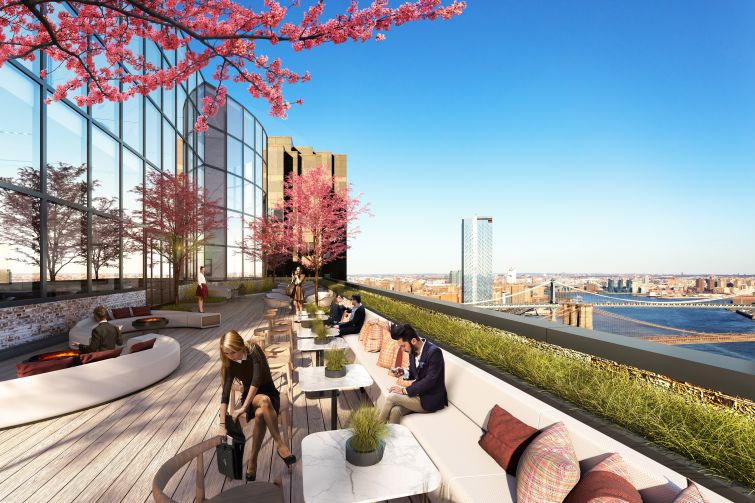 The renovation will add a number of amenities, including roof decks on previously unused gravel roofs. Image: Gensler 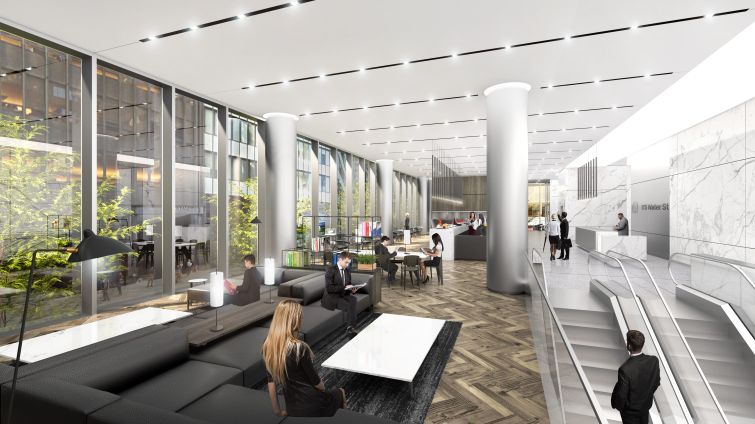 The upper level of the lobby will include a cafe with grab-and-go food offerings for tenants. Image: Gensler 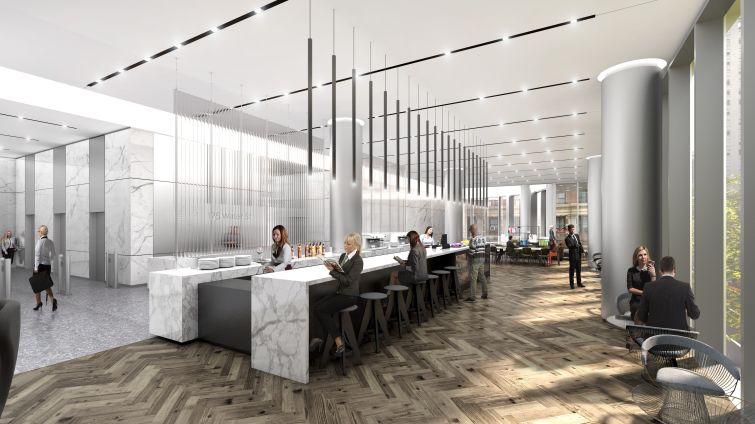 Another view of the lobby cafe. Image: Gensler

Another look at the new ground floor for 175 Water, which will fill in the dark, empty retail arcades that the building has had since the 1980s. Image: Gensler 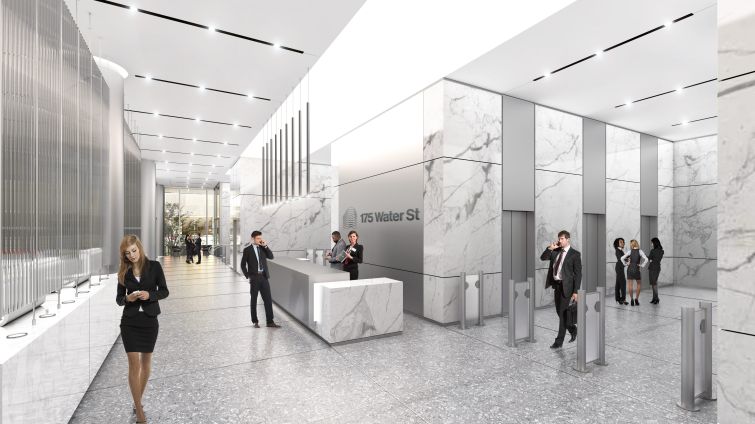 The reception area, like the other parts of the first-floor lobby, will include plenty of white marble. Image: Gensler
Previous Next

The longtime AIG headquarters at 175 Water Street is getting a facelift.

Built in 1983 by developer Howard Ronson, the 31-story office tower served as the headquarters for NatWest Bancorp and, beginning in 1996, insurance giant AIG. The blocky, modernist office tower is basically a red brick and dark glass box perched on several narrow, circular columns, with a recessed, circular glass core extending upward inside the building.

Now Gensler and the new owner, Metro Loft, have decided to repaint the brick in a darker color, replace the dark glass with more transparent and efficient windows, and completely revamp the interior. The curved glass curtain wall will be extended outward to include the columns, adding several thousand square feet to the ground and second floors.

Extending the glass core outward to create a new facade at the base of the building is an attempt to fix the unwelcoming, covered retail arcades on Water Street.

“We’re really rethinking about how it urbanistically hits the ground and interacts with the streets,” Gensler principal Robert Fuller said. “Today urban planners wouldn’t make that choice of allowing those dark arcades. It just made the retail very dark and uninviting.”

Metro Loft, which has done several office-to-residential conversions in the Financial District, had originally planned to convert part of the building to apartments, but the pandemic seems to have thrown a wrench into that plan.

The developer also plans to add two extra stories to the top of the building. The former AIG cafeteria on the 16th floor could become an amenity floor, with a conference center, town hall space, an outdoor terrace and a fitness center. Two inaccessible, gravel rooftops on the upper floors will also become roof decks. Other upgrades include new mechanical and electrical systems, including pandemic-friendly HVAC systems, and destination dispatch elevators that can be keyed to workers entry cards.

The lobby, which is also a privately owned public space, will get a cafe and potentially other kinds of market-style retail. The redesign for the ground floor includes white terrazzo marble floors, dark suspended wood ceilings, repainted silver columns, and a combination of modern lounge seating and tables and chairs. The lounge and cafe areas will have flooring that resembles patterned dark wood, which will continue upstairs in a second-floor lounge and coffee bar that’s reserved for office tenants. There is also the opportunity to create a second entrance and lobby for another anchor tenant.

AIG will occupy the building until its lease is up at the beginning of 2022. Until then, Gensler, Metro Loft and Newmark Knight Frank will search for tenants, and tweak their designs to fit what those tenants want. Asking rents range from $60 to $68 a square foot. The aim is to lease to large tenants who want at least 100,000 square feet of space.

“Depending on who the tenant is, we have time to customize our drawings,” said NKF broker Andrew Sachs. “If they’re taking a large bank of space, if they wanted something different than the design of what we’re thinking about, we have time to engage in those conversations with tenants. We’re seeing a lot of activity in the 300,000- to 400,000-square-foot range.”