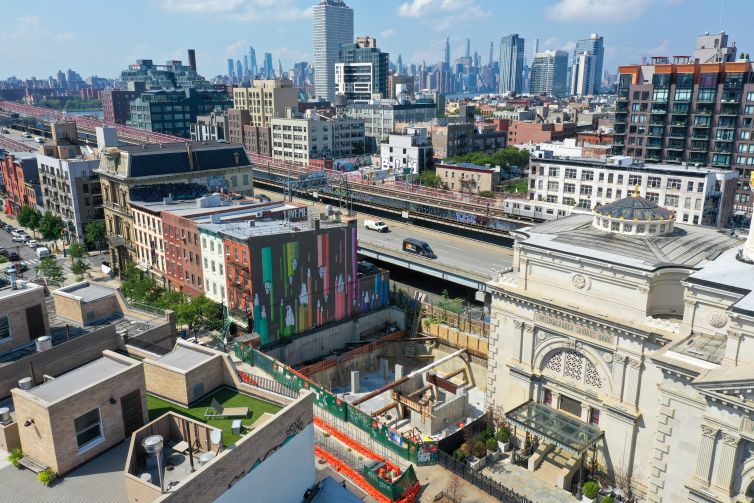 The Bluestone Group, the junior mezzanine lender on a shovel-ready development site at 159 Broadway in Williamsburg has triggered a UCC foreclosure auction, Commercial Observer has learned.

The auction is scheduled for October 19.

The site is a 9,262-square-foot parcel, which features 130,154 buildable square feet, owned by Cornell Realty Management that’s located to the left of the inlet and outlet leading to and from the Williamsburg Bridge and is just a short walk from the East River waterfront. It’s right across the street from the Williamsburg Peter Luger Steak House outpost.

Just this past February, foundation work had begun on a mixed-use hotel and condominium project at the site.

Bluestone Group provided a $3.6 million junior mezzanine loan on the project in November 2019, while Madison Realty Capital (MRC) had also provided a roughly $24 million first mortgage in the package, records show. An official at Bluestone was not available to answer a call requesting comment on the foreclosure action.

The proposed plans for the previous development — which was designed by Stonehill Taylor Architects — called for a 26-story mixed-use hotel and condo project, with roughly 87,800 square feet of hospitality space and 235 guest rooms as well as 21 condo residences located across the top five floors, according to property information included in the UCC brochure.

The property’s excavation work was wrapping up in September 2019 and by February Cornell Realty Management had started on foundation work. According to the UCC marketing brochure obtained by CO, the foundation has been poured and the site is primed and ready for “immediate construction.”

Cornell could not be reached prior to publication.