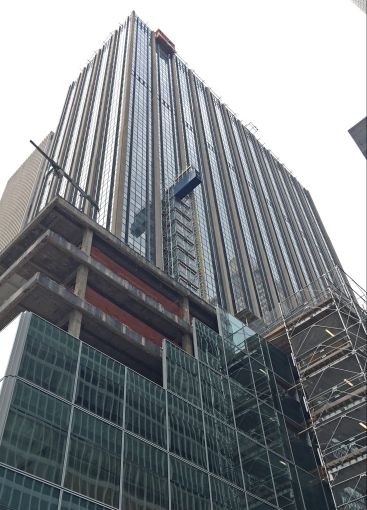 1271 Avenue of the Americas where Ted's is renewing. Photo: CoStar Group

A Rockefeller Center restaurant has renewed its lease in a move that its landlord is touting as a sign of the resiliency of the property and its surrounding neighborhood.

Ted’s Montana Grill occupies 6,106 square feet on the south side of 51st Street in the Rockefeller Group’s 1271 Avenue of the Americas. It’s the only New York location for the chain, which includes 41 restaurants in 16 states.

A Rockefeller Group spokesman declined to disclose terms of the lease, including rent, though he did say it was a “multiyear deal.” Ground-floor retail rents in the immediate area, too, are some of the most expensive in the city, according to the Real Estate Board of New York. The restaurant—perhaps best known for its bison-based offerings and decor—has been in the building since 2006.

“We are pleased that Ted’s Montana Grill extended its lease for its space at 1271 Avenue of the Americas,” Ed Guiltinan, senior vice president and head of leasing for Rockefeller, said in a statement. “Given the current turbulent retail environment, we believe this transaction confirms the desirability of the building and its location in Midtown Manhattan.”

The 48-story, 1.96 million-square-foot skyscraper was formerly known as the Time & Life Building. After Time Inc. vacated the tower in 2015 for offices in lower Manhattan, the Rockefeller Group embarked on a $600 million upgrade and rebranding—which included the name change to 1271 Avenue of the Americas.

Ted’s Montana Grill remained open during that transition, but, like with so many eateries across the city and the country, the coronavirus pandemic forced it to shutter in late March. It has reopened over the past couple of weeks for takeout and outdoor dining.

Other tenants in the building include AIG, money manager Bessemer Trust, law firm Latham & Watkins and Major League Baseball, which has offices at 1271 A of A and is planning to open its flagship store there too.

Eric Gelber and Jordan Kaplan of CBRE represented the Rockefeller Group in the Ted’s Montana deal, in coordination with Guiltinan and Jennifer Stein in-house.