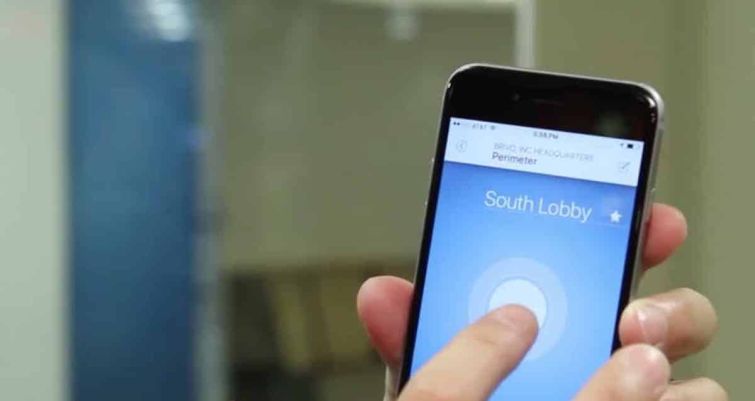 Proptech has expanded steadily and widely in commercial real estate, but since the pandemic put the economy on ice and forced businesses and offices to close around the country, it is becoming a vital component for managing buildings and safely monitoring workers across all asset types.

Steve Van Till, CEO of Brivo, spoke with Commercial Observer about how the firm advanced over the past two decades, how its use evolved, and how demand for proptech shifted when the pandemic disabled the economy and flipped building management on its head.

Commercial Observer: Can you describe the business plan in mind when you launched, and what opportunities you saw then?

Van Till: We first launched in 2002. We were the first company in the industry to use cloud technology for access control and video surveillance.

I had come out of a much more hardcore technology background, and to me, this just seemed like it was the obvious way to solve these building security problems, especially for people that had a large geographic footprint, multiple properties, and large user bases. The web was the perfect technology to solve all of this.

What we discovered, since none of us were from the security industry, is that it is much more conservative, and slower to adopt new technology than fields that I’d been working in, like healthcare and the e-commerce businesses. So, the early years, I would say the decade up until 2010, was very much a proselytizing decade — explaining to people why this was better, why it was secure, and how to address their needs in a much more affordable way than a lot of the on-premise solutions that were dominant at that time.

Then the second decade, I would say it’s really been more of a hockey stick (in terms of growth) … and we’re now at over 20 million users on the platform, growing by a few million users per year … A lot of that has really been accelerated by all of the API (application program interface) connections we have, to partners and individual customers who’re using that to synchronize identities.

In that first decade, what were some of the types of clients utilizing your product most, and how has your client base changed?

If you think of where residential use (of digital infrastructure) was in that first decade, or where people were with respect to using other internet services — like AOL back then, first coming into their bank account, or their brokerage for the first time. Those were the kinds of people that were comfortable using web services for getting personal things done. They were the first ones to be comfortable using [proptech] for their business as well.

For the second decade, the arc overall has been toward enterprise and larger, multi-site and multinational companies who said, ‘Look, this is ridiculous to be running our own servers for this service. We should be using a web service.’

In terms of the demographics … if you go to the Census Bureau, there’s an 80-20 percent split in the business addresses in the U.S. between small and medium (at 80 percent) […] and about 20 percent of businesses are in the enterprise category, or greater than 500 employees.

When we do the demographics on our customers, it is exactly the same — 80 percent of the physical addresses that we manage  are in that SMB (small and midsize business) category. Twenty percent belong to businesses with over 500 employees.

The other dimension that I think fills out the story of enterprise penetration over the last decade, is that we recently intersected our customer list with the Fortune 500 list and found out we have over 200 Fortune 500 customers. That’s the story that says this is really now fully adopted by the biggest companies in the country.

The outbreak and social distancing brought new uses and new demand for your product that weren’t there before. Can you talk about how things evolved in the past four to five months?

Obviously, COVID has been the No. 1 topic in almost every room, anywhere — business, personal, what have you. We were already on a very mature platform with lots of different features. So, the first thing we did, after it became obvious that work-from-home was going to be a big thing and reopening or returning to work was going to be a big thing, was to build out some features that allow people to reopen safely.

[…] One of the features is contact reporting for employees and other credentialed people who come into the building. We’ve made it really easy for people to say, ‘Oh, we know that we had an infected person here on Tuesday. Who else was here at this building in approximately the same time and location?’

The second thing we did on the reporting side is add health screening questions to our visitor management solution. That’s in the iPad kiosk in the lobby of the building; you can present that to incoming visitors and ask them some questions. At least then, from a liability standpoint, you have a record of what transacted, and you’re stopping people, asking them to give a report and most people tell the truth of where they’ve been, [and if] they feel sick.

In terms of controlling who comes in based on health status, there’s two different options. One is self-reporting, or self-attestation on a mobile platform. Our mobile apps or mobile credentials allow you to put a policy in place as the administrator that says, everybody’s essentially deactivated at midnight or some other time at your convenience. And, before they can come in to work the next day, they have to answer some questions on their mobile app. And, if they don’t answer them in a way that we feel comfortable, then we’re not going to let them activate any of the doors.

That same policy can also be implemented by our personal control feature, which is a human-aided version (to observe individual users) that might include taking their temperature with either a thermal camera or some other kind of thermometer, and then only after they’ve gone through that entire protocol of reactivating their credentials, they can come and go for the rest of the business day.

Those are the things that we did immediately, about five or six weeks after COVID became the phenomenon that it is now, and those have been very much in demand across all kinds of customers.

Are you working with schools and education systems with these same types of technologies to help that side as well?

Yeah, absolutely. Everybody wants to have solutions and I think a lot of the schools are sorting out which things they invest in first. Some people might come to the conclusion that perimeter security access control, thermal cameras, are the first thing that they need to think about. Other schools or districts come to the conclusion of having more distancing barriers, and people management. A lot of schools are forming pods of students that only interact with each other, with 20 or 30 people.

So, a lot of people are coming up with different ways of approaching this. Some of them are saying technology is where we want to go first, others are saying we’re gonna try something different.

Do you see these types of technologies as a gateway to reopening schools?

I do, because I don’t think that the personnel management, and the health certification or health attestation is going to go away anytime soon. And so I think that kind of perimeter control is going to be important.

Automation is a huge benefit because if you think about the beginning or the end of the day at school, there’s huge volumes of people that are all coming in at the same time, and technology is really the only way to deal with people at scale. So, the nice thing about the mobile credentials, and pairing with mobile health questionnaires, is that a lot of that can be done five minutes before you get to school, an hour before you get to school, and it doesn’t have to be something that impedes the flow.