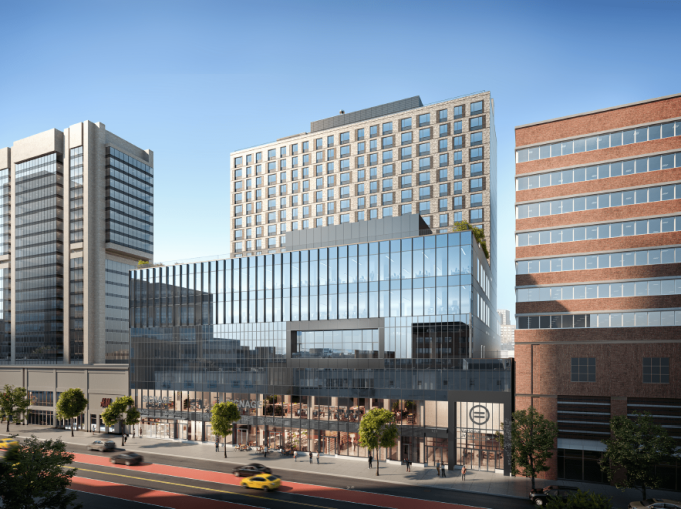 The National Urban League, a nonprofit dedicated to advocacy and economic empowerment for African Americans, has lined up $188 million in financing from Goldman Sachs Urban Investment Group to start construction on its new headquarters in Harlem this fall, the organization recently announced.

The total financing for the project is $242 million, $188 million of which is from Goldman Sachs.

The 17-story project will include 170 affordable rental units, a civil rights museum, 73,000 square feet of office space for community groups, 105,000 square feet of retail, and an 80,000-square-foot headquarters and conference center for the Urban League. The development, known as the Urban League Empowerment Center, will replace a low-slung retail building at 121 West 125th Street and a four-story parking garage that fronts the north side of the lot on West 126th Street. It will also rise next to the Brutalist Adam Clayton Powell Jr. State Office Building.

The state-owned property — between Adam Clayton Powell Boulevard and Lenox Avenue — originally went through a request for proposals process back in 2012, and then the project remained in limbo until a year ago. The Empire State Development Corporation (ESD) rezoned the parcel through the much-maligned General Project Plan process in 2013 and modified the zoning again last year.

Beyer Blinder Belle is handling the design of the building, and the developers include Black-owned firms BRP Companies and Dabar Development, L+M Development Partners, Taconic Partners and Prusik Group.

The complex financing package includes tax-exempt bonds issued by the state Housing Finance Agency and enhanced by Goldman Sachs, subordinate financing from New York State Homes and Community Renewal and tax credits purchased by Goldman and Santander Bank from Redstone Equity Partners. The office portion of the project is being financed by loans from Goldman and the Upper Manhattan Empowerment Zone.

Margaret Anadu, the head of the urban investment group at Goldman, said, the firm was “excited to play a role in this transformative development that will not only strengthen the National Urban League, one of the most important civil rights organizations in the country, but will also bring more affordable housing, historic cultural space, and job opportunities to the Harlem community.”