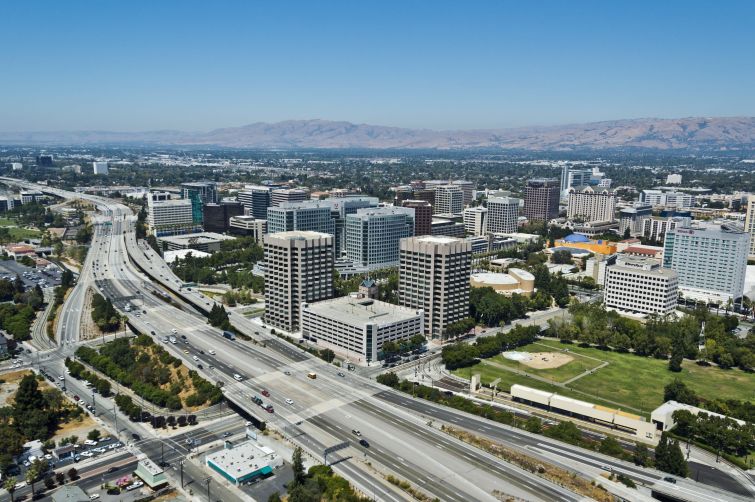 San Jose, Calif., where one or more of the senior living properties in this Welltower transaction are reportedly located. Image: Getty Images

The financing — originated by Goldman Sachs and Deutsche Bank — refinanced $140.5 million of existing debt, funded $7.7 million of reserves upfront, provided about $2.3 million of cash equity to the sponsor and paid $4.5 million worth of closing costs, per Fitch’s analysis. The deal closed on Aug. 7.

The 10-year, interest only loan pays interest at a rate of 2.8 percent and is part of the $630.8 million DBJPM 2020-C9 CMBS transaction, in which a $30 million note is included — the remaining $125 million will be securitized in future deals.

Designed by Gensler, the property is called Coleman Highline, a massive mixed-use Silicon Valley office development that will eventually comprise around 1.75 million square feet of office, residential and hospitality space. The collateral in this CMBS deal spans 381,000 square feet across two office buildings that make up a portion of the overall development as well as a third 22,889-square-foot amenity building that accompanies them; it includes a gym and a 1,182-space parking garage. Fitch’s “as-is” appraised value of the assets in this deal was pegged at $301.1 million, while its stabilized value was set at $305.2 million. Roku has leased all of Coleman Highline “Phase I,” which has two other office buildings that are not included as collateral in this transaction; altogether, it’ll span more than 738,000 square feet of space, according to Fitch.

The property was completed in 2018, according to Ftch, and is fully leased to Roku, which will utilize it as its U.S. headquarters once social distancing and mitigation mandates eventually soften in the area. The development is located at 1155 Coleman Avenue in San Jose, directly next door to Avaya Stadium, the home of Major League Soccer’s San Jose Earthquakes. Roku is relocating from its former home in Los Gatos, which is an area about 10 miles south of downtown San Jose. The JV wrapped construction of the collateral in this deal at a cost of around $250 million, according to Fitch, which, with this CMBS loan, points to around $95 million in equity that still exists.

Nearly a month before this financing closed, it was reported that the JV had put the Roku-leased assets on the market for sale, according to a report in the San Jose Business Journal. Last summer, the joint venture also inked Verizon to 640,000 square feet at other office developments within the complex, with plans to partner with the telecommunications giant to build out its space, which will eventually house 3,400 employees.

Fitch highlighted Roku’s scheduled investment in the property as one of the strengths of this deal as the media company has leased the property through September 2030 — with annual rent increases set at 3 percent; Roku is planning to inject about $43 million, or $120 per square foot, of its own capital into its space as well as $29 million in tenant improvement allowances, per Fitch. The lease has one seven-year extension option and no termination or contraction options. The ratings agency also noted that the pandemic has benefited Roku given that demand for online streaming services has skyrocketed as a result of more people being confined at home.

Before COVID-19 set in in March, Roku had begun moving into one of the buildings in this deal, with a plan to have its employees in both by the end of this year. Now, the media company is aiming at moving its employees back into one non-collateral office building as well as finish its build out of the aforementioned asset to be occupied by this fall. Despite any challenges, Roku has not requested any lease modifications, according to Fitch.

The larger Coleman Highline development will eventually feature 1.75 million square feet spread across seven office buildings and multiple amenity buildings. The collateral in this deal is officially “Phase II” of the development. The development’s third phase — fully leased to Verizon — is slated to wrap by 2021. There will also be a 175-key hotel that is scheduled for delivery next year as well as 1,600 residential units, which still happen to be in the early stages of planning.