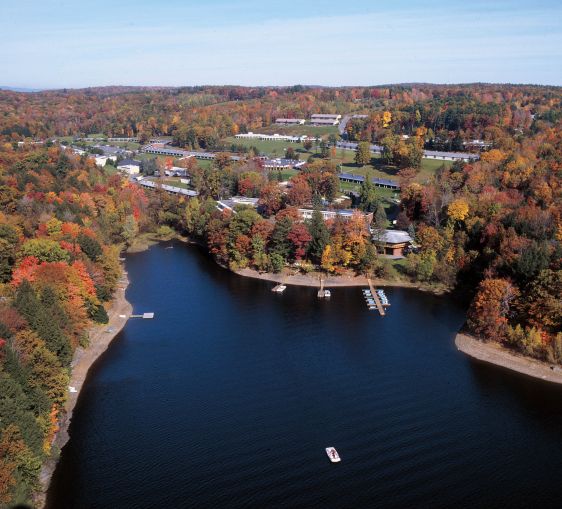 No longer. A global pandemic that grounded everyone has hollowed out the hospitality and leisure industries, leaving some observers to wonder whether we will ever fly as frequently again. Business in the travel industry is off by 90 percent compared with last year, travel agents say.

“There’s interest but you’re not in a city unless you have to go there as an essential worker, and business is even further off than leisure [travel],” Jennifer Wilson-Buttigieg, the owner of the travel agency Valerie Wilson Travel, told Commercial Observer.

Vacation plans that seemed ironclad in January have been scrapped indefinitely as much of the world has barred American tourists from its borders. Air travel nosedived 96 percent in April while cancellations were up 5,000 percent during the pandemic’s first wave. Flights have rebounded slowly this summer but air traffic during the Independence Day weekend was 70 percent below what it was last year, CNBC reported.

“The traveler is waiting for some more standards to better understand and rebuild their confidence,” Wilson-Buttigieg said. “The airlines have worked hard to say masks are required, hotel chains are saying what the new protocols will be, but we’re in the early phases.”

Fewer travelers meant fewer people making hotel reservations too. City officials had been expecting 67 million people to visit New York this year, but those projections evaporated by March. Hotel revenues have since dropped 75 percent and occupancy rates are around 50 percent—although that could be far lower since half of the hotels have not released their data, hotel association officials told the New York Post last month. The loss in business could cost the nation $16.8 billion in state and local tax revenue this year, including $1.3 billion in New York state alone.

It doesn’t look like tourists will be returning to the city anytime soon either. Gov. Andrew Cuomo mandated that travelers from states south of Pennsylvania must quarantine for a 14-day period in order to prevent a second outbreak as COVID-19 cases skyrocket in the rest of the country. Broadway is staying dark until at least January, restaurants and movie theaters remain restricted, and thousands of hotel rooms have permanently closed amid the lockdown.

But after months of work-from-home work-arounds and alarming coronavirus updates, New Yorkers need a vacation.

Some have already bolted the city for long-term rentals in the suburbs. And there are plenty of options for leisure a few hours away. The charming inns that dot the mountains and shoreline throughout the northeast have welcomed a stream of leisure seekers since June, a rare bright spot for the hospitality industry.

Those in need of a respite from the sweltering city are trekking to the nostalgic lodges of the Poconos, the Catskills, the Finger Lakes, the Berkshires, and Maine’s rustic coastline, as well as the blue-blooded getaways of Cape Cod and the Hamptons.

“A lot of people in the Northeast, if they want to go out there, are staying with a friend,” Wilson-Buttigieg said. “People are watching money too. There’s uncertainty for how this is affecting the economy.”

The future of leisure may be a walk through the past.

Couples and families looking for a cozy retreat are heading two hours west of the city to the foothills of the Pocono Mountains. Plush resorts began sprouting across the northeast Pennsylvania woods during World War II to accommodate soldiers returning home from war and their loved ones. By the 1950s, the area became a hub of honeymooners thanks to its combination of jacuzzis, ski facilities, and restful outdoor spaces.

The Cove Haven Resort in Lakeville, PA, introduced heart-shaped tubs in 1964 and became world famous after Life magazine profiled the region seven years later. Other resorts added sweetheart pools, and Cove Haven introduced seven-foot whirlpools for two in the shape of a champagne coupe by 1984.

The memories of lascivious weekends has lured back nostalgic honeymooners and their progeny. Many of those mid-century resorts have closed or reinvented themselves as casinos, but Cove Haven is one of the few that has maintained its romantic heritage.

“We’ve had this surge of honeymooners in the ‘70s and we’re now seeing a surge of children and grandchildren come, saying, ‘My parents used to talk about this place,’” Eric Lansberry, marketing and sales director at Cove Haven Entertainment Resorts, told CO. “We’re starting to see an increase in curiosity.”

The company’s three resort complexes, which comprise 586 rooms across 681 acres, have evolved to cater to younger generations, offering activities on the premises that include basketball, archery, paintball, and cycling, as well as risqué bingo. Suites range from $260 per night for a breakfast-only package up to about $500 for all meals on site.

The prevalence of open space and nearby hiking trails has made the Poconos readily adaptable to the era of social distancing.

“We offer the same amenities a cruise would, except we are landlocked, which is working out nicely for us,” Lansberry said. “Our call volume is through the roof. We can’t keep up with it.”

Two of the three Cove Haven campuses closed between March 31 and May 8, during the pandemic’s peak in the Northeast. By June, the resorts had received triple the number of website visitors than they had in 2019, and mid-week reservations were up 8 percent, Lansberry said.

The design of the resorts helps too. Guest rooms are separated from the main building and suites have their own private entrances, allowing people to come and go without bumping into each other.

Still Cove Haven has adapted to take several precautions in order to make guests feel welcome and comfortable. There are sanitizing stations throughout, staff must wear masks and gloves and clean recreation equipment between uses, masks are mandatory for anyone in the lobby, and reconfigured dining rooms have tables spaced six feet apart and a capacity of 50 people.

Although the Poconos are known for its restaurants, casinos, and waterpark activities, few attractions are open.

“For the most part guests are staying on site,” Lansberry said. “They want to take advantage of the rooms, in-suite pools and massage tables.”

The Catskills have undergone more reinventions than cats have lives, from its Borscht Belt entertainment circuit to its hippie-hosting festivals, ski resort destination, and artist colony retreats.

Burnt-out New Yorkers had been migrating up Interstate 87 to relocate or buy second homes for much of the past decade. When the pandemic struck, the trend accelerated, leading to bidding wars for homes under half a million dollars.

Those who do not want to plunk down tens of thousands of dollars to take in the pristine beauty of mountain streams and the Hudson River Valley still have many options for a weekend getaway.

The Catskills resorts popularized by Dirty Dancing and The Marvelous Mrs. Maisel are largely defunct, giving way to minimalist lodges focused on wellness such as the Red Rose Motel & Tavern and A Tiny House Resort.

Then there’s Scribner’s Catskill Lodge, a 1960s- era ski compound that once had a clothing-optional grotto in the basement. Hotelier Marc Chodock purchased the resort in 2015, and renovated it into a summer oasis for city dwellers like himself.

“What brought the Catskills back in the last five to 10 years, was the new design and culinary options that you have,” Chodock told CO. “A lot of amazing creative people who didn’t want to go to the Hamptons and found great spaces here to do cool things. People who couldn’t afford to run a restaurant in the city and pay that rent could buy a building, update it, and be their own chef.”

The coronavirus pandemic forced many upstate hotels to shutter temporarily and reopen with a reduced capacity even though cases were far less prevalent than in the New York metropolitan area. Weddings and other large events have been postponed to next year but the lodge is far from empty.

“We are generally sold out even though we have lower occupancy and we have been selling out a lot further out than in the past,” Chodock said. “We look forward to seeing what the fall brings.”

Chodock is keeping the resort only 75 percent full at all times and closing on Monday and Tuesday in order to give staff more time to clean rooms and common areas. Rooms have their own air- conditioning units, and they are also closed for a day after a guest checks out so staff can sanitize the space before the next group arrives.

“Time itself can kill the virus, so we are giving it time to die on the surface, spraying things down and using disinfectants and ultraviolet light to gloss over surfaces,” he added.

With many restaurants closed, Scribner’s is keeping its in-house dining option open for guests, so they don’t have to feel anxious searching for a diner after visiting Woodstock or Hunter Mountain trails. Standard room prices start at $200 per night and larger suites can go up to $950 a night.

“We’ve put up plexiglass all over the place in the banquet areas and in the restaurants to allow for a 5-foot barrier between guests and staff,” Chodock said. “The restaurant is very busy, but we’re still serving less than 50 percent than we normally do.”

The summer season in the Hamptons began two months early when well-heeled New Yorkers fled to their second homes or scrambled for rentals as the city became inundated with coronavirus cases.

Hotels in East Hampton and Southampton closed during the first wave of the pandemic, which sickened nearly 43,000 people and claimed 2,000 lives in Suffolk County. A slew of charitable fetes and summer festivities were canceled or indefinitely postponed as seasonal Hamptonites appeared content to entertain themselves and close friends at home.

Those who didn’t splurge on a summer chateau or a long-term rental in the spring aren’t left out from experiencing the serene beauty of the Long Island Sound. The Southampton Inn has been flooded with reservations from Tri-State travelers who have filled up its 90 rooms for much of the summer months after international clients and large group events canceled. Prices start at $300 for a weekday stay and rise to $600 per night over the weekend.

“The guest rooms for all of us out east will probably fill up because they’re extended stays for us and the rates are lower but we’re really happy to see higher occupancies coming in,” Southampton Inn owner Dede Moan told CO. “Other businesses, events, weddings, golf outings, and dinners with their scotch and soda have all been canceled. They’re not coming in, they’re not permitted and we don’t want them.”

The inn has adopted a new cleaning protocol with UV germicidal lamps to sterilize rooms as well as disinfectants recommended by Stony Brook University Hospital which gloved and masked staff use to clean banisters and any commonly touched surface. Guests can access their rooms through private entrances from outside or a small stairwell, avoiding elevators and foyers where people could congregate.

Those who want to hit Cooper’s Beach can take the inn’s shuttle for the mile-long ride to the shore, although it is limited to one person per row. The restaurant remains closed for indoor seating, but has been preparing picnic spreads for guests to bring with them to the beach or elsewhere outdoors.

“The shops have things on sale, restaurants are still serving, and the beaches are open,” Moan said. “We will do whatever we can so it’s safe and legal and inviting to encourage people to come out.”

Moan believes the coronavirus era offers vacationers a glimpse of the tranquil summers of yesteryear before the villages became home to raucous rose-fueled revelry.

“It’s a lovely slower pace. It’s historic,” she said. “I’m sure there are some who are disappointed, but what we’re seeing is pleasure and relief and excitement about being able to be out of the city and out of their apartment and be able to have the whole beach and feel safe.”