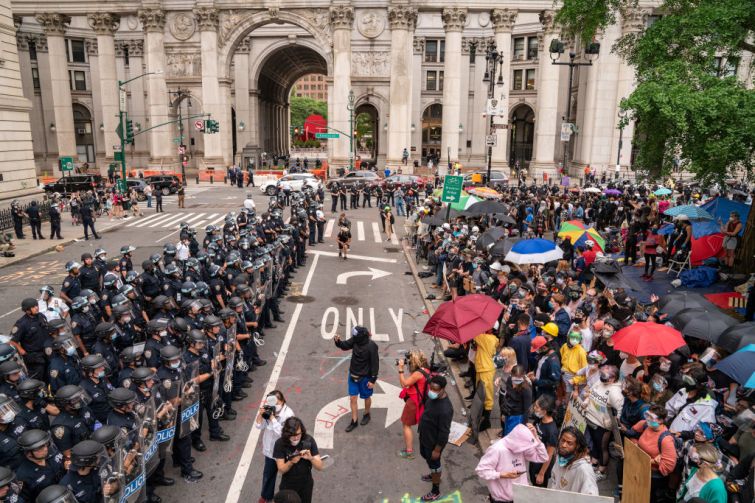 The New York City Council last night passed a controversial budget that shifted $1 billion away from the city police department, slashed funding by 40 percent for affordable housing, and shrank funding for other kinds of public construction projects, including schools, senior centers and the borough-based jail plan.

“We tried to save jobs and protect the social safety net programs our communities rely on,” City Council Speaker Corey Johnson said during a budget briefing yesterday. “With no help from Albany and no aid from the federal government, we came up with the best budget we could.”

Advocates and industry groups argue that the cuts will result in the loss of 21,000 affordable apartments, including 3,000 supportive units, over the next two years. That will mean delaying or cancelling financing for 5,200 new construction apartments and 15,600 preservation units.

The $88 billion budget that passed after midnight on July 1 was the result of months of difficult negotiations between Mayor Bill de Blasio and the City Council. The 51-member council approved the fraught legislation with a vote of 32-17, with many members who voted their conscience because they’ll be term-limited out of office at the end of 2021. Nine progressive council members voted against the budget because they felt the plan didn’t cut enough funding from the New York Police Department, while eight conservative members voted against it because they disagreed with cutting the NYPD budget at all.

The city faces a projected $9 billion gap in revenue because of the pandemic, which forced the mayor to impose $2.7 billion in cuts over the next two years.

The budget deal cut $1.04 billion from the capital budget for the city Department of Housing Preservation and Development for fiscal years 2020 and 2021. The 40 percent reduction shrinks the agency’s funding this year and next from $2.68 billion in the pre-COVID budget plan to $1.64 billion in the current one. More specifically, HPD will see a reduction of $583 million in fiscal year 2020 and $457 million in 2021.

The City Council did manage to salvage some funding for housing-related programs, including rental vouchers, foreclosure prevention programs and a community land trust initiative, as well as legal services for low-income tenants facing eviction. Other initiatives hit the chopping block, like the basement apartment conversion program.

Jolie Milstein, the head of the New York State Association for Affordable Housing, a developer trade group, had dire predictions on what landlords and developers would be facing once federal CARES Act relief funding runs out this summer.

“I don’t think anyone, anywhere thinks the cuts are a good idea,” she said. “We’re still experiencing the afterglow of the first couple of federal tranches of federal relief. We won’t know [the impact] until the end of July when that money dries up. We haven’t seen the precipitous fall off of rent payments across portfolios. When people stop getting federal payments beginning in August, we may see a different picture.”

She also pointed out that certain kinds of federal bonds and tax credits have to be allocated to projects this year, or else the city loses access to them entirely. If the city can’t fund those projects, those federal dollars will disappear.

“We need to commit those resources this year in order to not lose those federal funds,” said Milstein. “I know there are projects that are at risk. Certainly 40 percent of the projects may not happen over the same time frame.”

Brendan Cheney, the policy and communications director at advocacy group New York Housing Conference, noted that the latest version of the budget restored $500 million in appropriations to HPD. However, the agency, likely facing pressure from the mayor’s office, seems hesitant to use it.

“They think it’s not wise to spend this money,” said Cheney. “We disagree, the Comptroller’s office disagrees. Ultimately it is a budget cut until they update the plan and say they’re going to spend the money.”

He added, “The [development] pipeline gets pushed back and how many of those deals completely go away because they’re too expensive or they just want to wait?”

The nonprofit Association for Neighborhood Housing and Development received $135,000 in discretionary funding from the City Council, but it was still deeply unhappy with the affordable housing cuts, which will hurt its small developer members.

“Many of the housing initiatives were maintained or slightly decreased thanks to the support of the NYC Council,” said Barika Williams, the group’s executive director, in a statement. “However, de Blasio kept in place the HPD capital cuts that will cost NYC 21,000 affordable units. Sadly, the Mayor’s administration refused to recognize that maintaining housing capital funds for critical affordable housing units is a key way NYC can invest in its communities.”