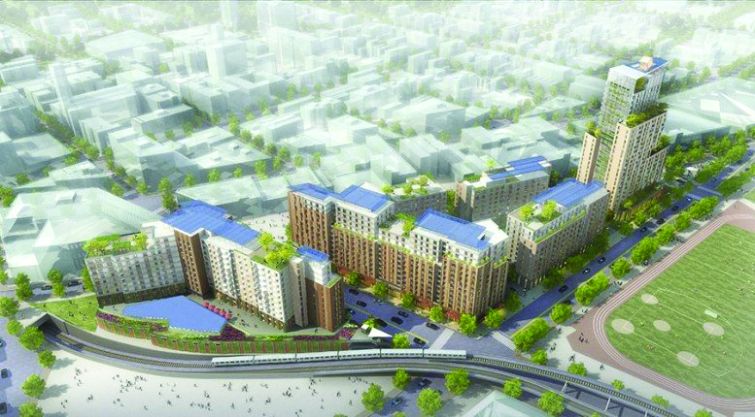 Big affordable projects like La Central in the South Bronx may be delayed after the City Council cut the budget for the city's housing department. Rendering: Hudson Companies

When the New York City Council pushed through a budget two weeks ago that slashed the city’s affordable housing spending, developers and nonprofits were reeling over the possibility of delayed projects and thousands of affordable apartments lost.

New York City’s Department of Housing Preservation and Development (HPD) hasn’t offered any answers to the largest affordable builders or to affordable housing advocates. The city agency, like many others, may be hoping New York gets an injection of federal funding to help fill the projected $9 billion hole in the city budget. HPD is expected to suffer a 40 percent cut to its capital budget over the next year, which will result in a loss of 21,000 new affordable apartments, according to an analysis by housing advocates and industry groups.

The cuts could have repercussions from some of the biggest projects under way, including La Central in the South Bronx and Sendero Verde in East Harlem.

Now the companies responsible for building much of the city’s below-market housing are wondering whether they’ll get much-needed financing for development deals that have been in the works for years. Many were hoping to finalize financing for multiphase, affordable rental projects sometime this year. Now most developers that rely on city subsidies plan to delay the start of construction at least six months, if not a year.

These projects are, of course, pivotal to Mayor Bill de Blasio’s pledge to preserve and build 300,000 affordable units by 2026.

“It’s obviously affecting my pipeline,” said Ron Moelis, the CEO of L+M Development Partners, one of the city’s largest affordable developers. “They’re just not closing on anything right now. It’s obvious that the city is going through some financial hardship and trauma. I don’t think I, or most people, understand exactly what that means from a perspective of how one would look at the capital budget.”

Moelis said he was unsure about the status of financing for phase 2 of Sendero Verde, a 655-unit affordable project that was approved as part of the East Harlem neighborhood rezoning. Construction began last December on the first phase of the development, which will bring 384 apartments, a school, community space and outdoor areas to a city-owned lot at East 111th Street and Madison Avenue.

“As they cut the budget and delay certain closings, projects like that will get held up, and they’ll have to make some hard decisions on which ones they close or put off for the next year,” said Moelis. He added that HPD finalizes projects in line with the fiscal year and closes most financing deals for developments in either June or December. But thanks to the budget uncertainty this year, he’d heard that few, if any, developers had completed transactions with HPD in June.

“The city closes most of their developments in June and December,” Moelis explained. “June is usually a huge month. I don’t think any city capital was expended [on housing] in June. If any jobs were closed it was a few small ones.”

HPD, for its part, offered the following statement on the cuts, which involved “shifting” that funding to the 2022 to 2024 fiscal years.

“This Administration has financed a record number of affordable homes for New Yorkers and has given priority to the most vulnerable communities including low-income households and families in shelter,” an HPD spokesman wrote in an email. “Tough choices had to be made in light of the city’s health and budget crisis but HPD continues to work hard on closing the deals it can on a rolling basis, and in order to continue our goal of delivering as much affordable housing as possible.”

Rick Gropper, a principal at Camber Property Group who is working on a number of affordable developments throughout the city, said the 40 percent cut to HPD’s budget would have a dramatic effect on its ability to produce housing for low-income people.

“It’s obviously a very dramatic cut,” said Gropper, who previously worked under Moelis at L+M. “Especially since it will affect people who are just trying to dig themselves out of a COVID hole. It will reduce the amount of affordable housing being created not just this year but in future years. That housing is going to the people who need it the most.”

He pointed out that large affordable developments employ thousands of people, both during construction and after completion.

“The city puts a lot of capital into affordable housing, and that capital is matched with private investment and bonds,” explained Gropper. “Affordable housing also generates a significant number of jobs—construction jobs and permanent jobs—that go to members of the local community. Contracts are bid out to MWBE [minority and women-owned business enterprise] firms who really need the work. But the people who lose the most are the people who actually will eventually live in those buildings and the people who benefit from the economic impact of the development.”

His firm often works on project-based and tenant-based Section 8 projects, where rent is capped at 30 percent of a tenant’s income, with the Section 8 voucher covering the balance.

“So if the tenant’s income goes down to zero percent, the section 8 voucher continues paying,” Gropper explained. “And that has become a valuable tool in the wake of COVID, now that so many people have lost their jobs.”

He tried to strike an optimistic note, pointing out that HPD was likely doing its best with limited information on its future funding.

“I think they’ve committed to closing all the deals that they were going to close by June 2020, but everything else is kind of on pause while they reorient priorities and figure out whether there’s additional money or additional resources that can be leveraged,” the developer said. “Everyone is doing this on the fly without having all of the information. I think HPD is doing as good of a job as they can to reorient the development pipeline, but no one wants to hear that their development deal might not be closed for three years.”

Aaron Koffman, a principal at Hudson Companies, argued that financing timelines are never completely certain for projects with public funding. His firm had been hoping to close on financing later this year for the next portion of La Central, a massive, multibuilding affordable housing complex under construction in the South Bronx. They’re about to wrap up construction on two affordable rental buildings with nearly 500 apartments and had planned to start on another two buildings with 350 apartments this summer.

“There’s never a guarantee,” he said. “Whatever we were assuming, we’re adding six months. We are just being reasonable that June of 2021 is the better estimation.”

He added that the funding shortage creates uncertainty not only for developers like him, who have already pumped millions into design and pre-construction for their future buildings, but also for builders who may have just purchased property with plans to build affordable housing.

“We as a company have invested all this money in these consultants,” said Koffman. “And we have done the work, and some people don’t get paid until we close and that’s a standard form—architects, attorneys …  Not knowing when we’re going to get our developer fee, which is usually three years after closing. That’s the first chance we get to offset the overhead on the project. All of that gets postponed. Not knowing when you may close puts a lot of uncertainty on how you’re going to recoup the money. That is a stress both on the developer and the consultants they hire.”