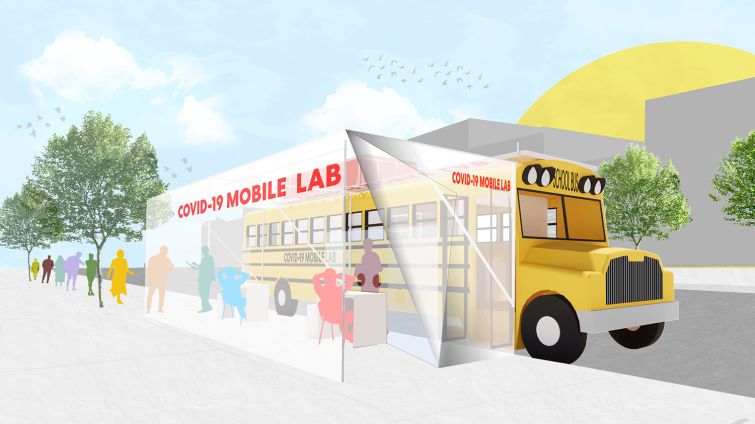 Workers would take samples from people outside the bus and then pass them into a negative pressure "clean room" inside the bus. Image: Perkins and Will 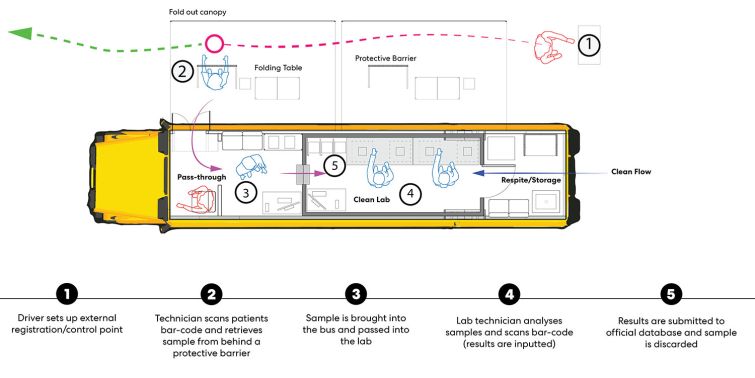 An air handling unit on top of the bus would help ensure that the lab room helps remain properly pressurized to prevent viral spread and keep testing samples intact. Image: Perkins and Will 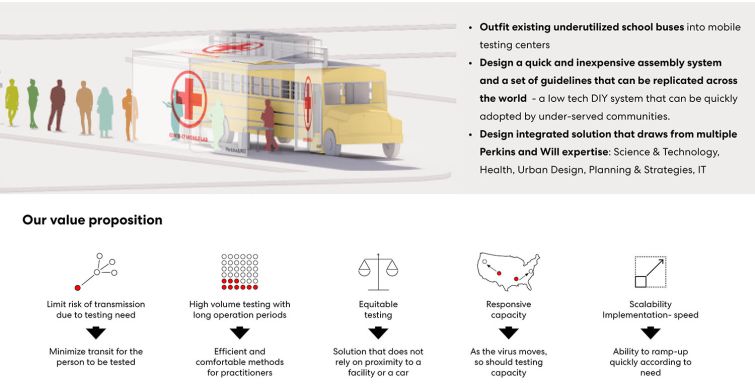 When the coronavirus struck New York City, the architects at Perkins and Will wondered how they could put their design and planning skills to use to help a city that had been economically and physically devastated by a pandemic.

Working with its Denmark office, Schmidt Hammer Lassen Architects, as well as engineering firm Arup, they developed a plan to retrofit school buses as mobile coronavirus testing units. A team of three architects in Perkins and Will’s New York office felt that the concept would be deployed in neighborhoods with a high-rate of COVID-19 cases, where people going to get tested run the risk of exposing others to the virus. (The city just announced a similar mobile testing program with trucks that will be sent to Soundview in the Bronx and Kew Gardens in Queens.)

Going to get tested “requires people to move, to get on public transit, and social distancing is hard to maintain,” said Mariana Giraldo, an architect and strategic planning specialist for Perkins and Will who came up with the concept. “We saw the drive through testing, but that requires people to have a car. [Coronavirus] disproportionately affects low income communities, the homeless, people who might not be comfortable going to more formal facilities and wouldn’t have access to a car.”

Creating a testing facility that could come directly to at-risk people seems like an easy way to help spread from symptomatic people who want to be tested. And there are plenty of unused school buses in the five boroughs and in cities across the country, many of which have shuttered their schools until September or later.

“A school bus is just one of the possible shells this could live in,” said Giraldo. “There is a cultural component to school buses that makes it approachable.”

Essentially there would be a sterile “clean room” box inside the bus with a lab bench, where a few technicians would handle samples and process them through an Abbott testing machine or similar mobile COVID testing device. An air handling device on the top of the bus will ensure that the lab area remains negative pressure, which helps prevent contaminated outside air from entering the lab area. Meanwhile, two or three more people will stand outside to collect samples from people being tested for COVID or its antibodies. Then the samples will be passed through a double-doored pass through in the plexiglass that separates the clean room lab from the rest of the box.

The architects wanted to develop a concept that could be cheaply and easily executed in any community.

“We sort of began this with the idea that any community could do this relatively easily with a kit of parts you could get from the internet,” said Rob Goodwin, a principal at Perkins and Will, who estimated that the components of the buildout would cost $25,000 to $30,000, not including the pricey Abbott testing machine. “You could do it in a number of different ways. A community could get this bus up and running and get it out into the community as quickly as possible.”