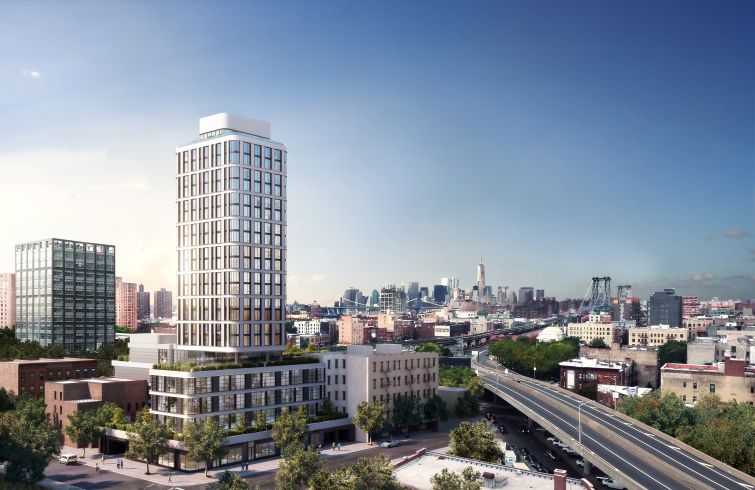 The Dime. Courtesy of The Dime.

Opening a new rental building during a viral outbreak that forced New Yorkers to shelter in place for weeks does not seem like fortuitous timing.

But the city’s rental market can work counterintuitively sometimes. Developers hope that a state-of-the-art building in a great location can overcome a temporary dip in the market.

Tavros Holdings founder Nicholas Silver has waited more than four years to finish The Dime, a 23-story tower in the heart of Williamsburg’s lively south side neighborhood which Tavros is developing in partnership with Charney Companies.

Construction continued on the site during Gov. Cuomo’s stay-at-home order — 30 percent of the building’s 177 units are below market and affordable housing developments were deemed essential work sites.

But the official launch was pushed back from April to mid-June. Prospective tenants have been able to tour and lease apartments virtually since Monday but Silver is eager to show them off in person.

“I already had corona — if I have to tour every person through the building I’ll do it,” Silver told Commercial Observer. “We’ve been extremely thorough providing masks, limiting the number of workers on site, and installing hand sanitizer and washing stations. Everything will be appointment only.”

Before the coronavirus pandemic swept across the region, a multifamily complex with a massive retail space in Brooklyn’s hottest neighborhood was considered a lucrative asset.

In many ways that’s still true. The 350,000-square-foot complex incorporated the historic Dime Savings Bank which will eventually house a retailer — one, hopefully, that has not yet declared bankruptcy. Its South Fifth Street entrance is steps from the Marcy Avenue subway station, two blocks from the Williamsburg Bridge, and six blocks away from Domino Park. Its market-rate apartments are less expensive than comparable studios and one-bedrooms on the waterfront.

But some amenities that were must-haves in luxury housing complexes as little as two month ago have suddenly become passé. Common spaces remain closed for most tenants. Crowded elevators are fraught with anxiety. Gyms, pools, and courtyards may have limited capacity and shorter hours for extensive cleaning once they reopen.

Instead sales agents at new buildings are emphasizing a building’s keyless entry, bulked up WiFi, outdoor terrace spaces, and easy conversion from a spare room to a home office space. Tenants viewing The Dime will likely hear about the building’s video intercom system run on ButterflyMX software that allows contactless entry, elevator access, and package delivery through one’s smartphone, as much as its location close to Williamsburg’s bustling parks, shops, and nightlife.

“We were in a position to be proactive in response to the pandemic with marketing and leasing efforts,” Douglas Elliman executive vice president Matt Villetto told CO. “Almost everything is completely touchless throughout the building, from the front entryway to package rooms. It’s something people are getting used to.”

Silver and Villetto expect to lease out The Dime’s units in the next six months. Dozens of prospective residents have already filled out applications for the building’s market-rate units and they’re hopeful they can go back to their leasing office by next month.

Silver says he “can’t imagine a more perfect offering” during the age of coronavirus.

“If people are fearful the world won’t open up, we have a building that is completely brand new that has a perfect balance of health and wellness with plenty of outdoor space and incredible views,” he added. “If there ever is a second wave, we think this strongly differentiates us from the rest of the market.”

Both Mayor Bill de Blasio and Gov. Andrew Cuomo say New York City could be on track to begin reopening in June, but no one knows what effect the pandemic will have on the city’s real estate market, public health, and its collective psyche.

The sudden indefinite halt of commerce caused by the outbreak eliminated 20 percent of the state’s workforce in less than two months and put the region at the brink of a recession. More than 930,000 New Yorkers have lost their jobs since March and many positions may vanish permanently if small businesses can’t get aid to survive in the coming weeks, according to reports from the New York Post and New York Times.

Manhattan offices have emptied out and may remain unoccupied as some employers let workers remain home until it’s safe to congregate indoors again, chilling the commercial real estate market. Commercial rent payments have plummeted as bars, restaurants, and stores may not open for months and there’s no telling when customers will return in droves.

A prolonged slowdown affecting broad swaths of the economy could lead to a drop in demand and pressure on landlords to lower housing prices.

“We could see softer rents but how soft and how long, no one knows,” Jonathan Miller, a real estate consultant and CEO of Miller Samuel, told CO. “If there is a sharp rebound of the virus in the fall that will double down on the damage of the economy, I’m not sure how many people will be willing to live in their apartment for two or three months again.”

Some have already left — at least for now. Between March and early May, roughly 420,000 New Yorkers temporarily fled the city. In its wealthiest neighborhoods, 40 percent of residents left for second homes, vacation rentals, and their parents’ guest rooms, according to the New York Times.

Most people left for summer homes in the

Hamptons, the Catskills, and in bedroom communities in Westchester and Hudson Counties. Some have relocated to Florida, Philadelphia, Los Angeles, Boston, and Washington, D.C.

“I’ve never done as many rentals as we’ve done during COVID,” Leahy told CO. “It’s amazing, people are just desperate to get out of Manhattan.”

Houses with a pool are the most desirable but tenants are bidding up for almost anything. One New Canaan listing that Leahy posted on May 18 for $40,000 per month rented for $50,000 per month two days later.

The minimum lease for a Connecticut property is three months but some families are extending their Fairfield and Litchfield County leases for the whole year. Half of Leahy’s clients want to sell their Manhattan abodes already.

“If you’re commuting twice a week, all of a sudden the suburbs don’t look so bad, you can get a tax write off, and taxes are lower,” Leahy said. “We have water and country; you can go to the beach and do a waterfall hike on the same day.”

Once people have gotten used to the suburbs, brokers believe they will pivot to purchase homes instead of moving back to the city, regardless of how the city recovers from the pandemic.

“It’s accelerating the movement of people out of the city — millennial families don’t want to be cooped up in their apartment,” CBRE Vice Chairman Jeff Dunne, who is based in Fairfield County, told CO. “New York won’t be the same for the next couple of years.”

Meanwhile the city’s rental market had already been softening by January, when the market value of homes and apartment buildings rose at the slowest level in six years in January.

The upper end of the market likely won’t be as damaged by the pandemic as workforce housing, analysts believe. Rents have stayed flat or slightly increased — average rental prices in Manhattan in April were actually 7 percent higher and 10 percent higher in Brooklyn than the same time the previous year, the Douglas Elliman rental report showed.

Developers like Eliot Spitzer, whose family has been in the real estate business for 50 years, are unbothered by the vagaries of the housing market. Spitzer hasn’t needed to offer any deals to tenants now that 70 percent of his 857-unit rental complex at 420 Kent has been leased. He just wants the gym to reopen.

“You don’t get into real estate thinking in 24-hour increments, we think in decades-long increments,” Spitzer said. “I tell everybody in my market, ‘We’re price-takers not price-setters.’ We build for rental prices to go around if it goes up a bit or down a bit, we’re good with it.”

Some owners are offering concessions like a free month of rent, but not at The Dime. Its team believes there is pent-up demand for Williamsburg units once shutdown orders are lifted.

“We anticipate a big rush for summer moves and the fall,” Villetto said. “It may take a little longer for the market to get into play but we’re very bullish on the building and its position on the marketplace.”

But properties are already starting to crowd the market. New rental listings jumped from 1,750 in late March to nearly 5,000 by May 10, as Commercial Observer reported. The average asking price for apartments during the two months of the pandemic has fallen slightly, down 3 percent in Brooklyn and 2 percent in Manhattan, and 0.7 percent in Queens, with larger price drops occurring in more affordable neighborhoods of Crown Heights and Prospect Heights, CO reported.

Even more homes could be available this summer as coveted student internships have been canceled or made virtual. Fewer young people could be moving to New York in the fall to start school or work if colleges continue remote instruction and more businesses like Facebook and Twitter allow workers to stay at home permanently. Douglas Elliman’s relocation division has been put “on pause” through September now that dozens of companies are delaying moves to the city, Elliman officials said.

The glut of housing supply could benefit tenants who may find their landlord is more willing to offer concessions or renegotiate a lease than risk keeping the unit vacant in the coming months.

“People will be making downwardly mobile decisions,” architect Gene Kaufman told CO. “They’re pairing up, moving to smaller places, and moving out of the city or moving to a more distant location that’s less expensive. And the impact of people who did not pay their rent is still unknown.”

Some tenants are already withholding rental payments. Nearly one quarter of apartment dwellers and 64 percent of retail tenants did not pay their rent in May, a Community Housing Improvement Program survey of owners who represent 100,000 units found.

Housing advocates predict a wave of evictions to begin occurring after June 20, when the governor’s moratorium expires.

“The courts will be madhouses, completely unequipped for this barrage,” Tenants Political Action Committee treasurer Michael McKee told CO. “For most tenants, there will be no way for them to come up with the rent that has accrued since the lockdown.”

The pandemic is already widening the chasm of income inequality. Job losses have been concentrated among the leisure, hospitality, and retail industry as well as hourly workers, independent contractors and gig economy hustlers who make up the city’s creative class.

Some analysts worry that New Yorkers of all classes will continue to leave unless the city takes more aggressive action to keep jobs in place and build more housing.

“The city is going to have to mobilize the private sector to stimulate the economy and the best way they can do that is by creating necessary incentives to have the private sector build more housing,” JLL’s New York Investment Sales chairman Bob Knakal told CO. “We’ve never seen anything like this in the modern economy. This will have to come back incrementally until there’s an improved therapy or vaccine.”