From Steiner Studios to Kaufman Astoria Studios, executives are holding talks on how and when to safely resume operations. 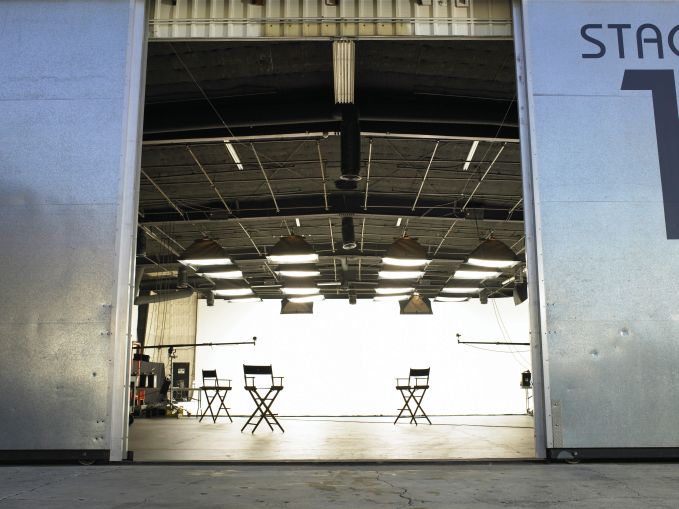 As the coronavirus shutdown marches into its third month, New York City's film studio executives are sketching out what a safe return to work looks like. Some are hopeful that filming could resume in the late summer or in the fall. Getty Images

After a long and lonely day of social distancing, you plop down on the couch to unwind with your favorite television show. But, on screen, a curious thing has happened. The steamy love interests, once inseparable, no longer share a kiss or even a hug; friends catch up over drinks across a kitchen table instead of their usual crowded watering hole; and everyone, everywhere sure does seem to be keeping their distance.

Call it a case of art imitating life, but script rewrites that incorporate social distancing are among the many changes being considered as the entertainment industry ponders its restart in the post-coronavirus era.

“You can’t write scripts now that have 300 people in the background,” was how John Ford, president of Local 52, a union that represents production crew members, put it.

From Steiner Studios in the Brooklyn Navy Yard to Kaufman Astoria Studios in Queens, executives are holding talks with production companies, government officials and labor unions on how and when to safely resume operations. Beyond the formidable health concerns, the industry is contending with unique challenges on how to adapt its often crowded film sets to meet evolving safety standards.

“Right now the industry is really preoccupied with what returning to work looks like, and how it can function,” said Doug Steiner, founder of Steiner Studios and chairman of Steiner NYC. “Traditionally, this business is a very large crew in close quarters. So that’s part of what people have to figure out, logistics wise.”

New York’s stages went dark in mid-Mach following Gov. Andrew Cuomo’s ban on non-essential businesses, which pulled the plug on the nearly 80 episodic TV series and 300 films that are shot each year in the city. Steiner noted that his lot typically hosts anywhere from 2,000 to 3,000 workers every day, with a production’s size ranging from 200 to 1,000 people depending on the number of extras on set. The move also pulled out the rug from under ancillary service providers like catering, lighting and equipment.

“Shows that we were doing [lighting for] on-location, they cut the season short and sent it all back. Pilots, obviously, did not go out,” said Hal Rosenbluth, president of Kaufman Astoria Studios. “Everything, rightfully so, got shut down.”

On its end, Kaufman has been approved for a loan from the government’s Paycheck Protection Program and is looking to maintain its payroll. But the layoffs have been far and wide, even reaching unions like SAG-AFTRA, which filed to temporarily lay off 39 New York employees this month.

The stoppage comes as the so-called streaming wars, led by giants Netflix and Amazon, led to a significant jump in demand for filming space, helping to put a halo around the city’s studio industry. A Robert De Niro-backed venture, Wildflower Studios, made a splash when it announced plans to build a new studio in Astoria, Queens, last year, while Netflix moved to build its own facility in Bushwick, Brooklyn. In the Bronx, York Studios opened a five-stage, 175,000-square-foot outpost earlier this year.

“It’s a really thriving industry,” said Anne del Castillo, the commissioner of NYC’s Mayor’s Office of Media and Entertainment. “It’s over 100,000 jobs, specifically in production. And it really does buttress countless other industries like props, florists, dry cleaning and food. It’s a business that really moves a lot in New York City.”

The studios don’t have clarity yet on a reopening date, mirroring a common predicament across the city. Gov. Andrew Cuomo released a phased reopening plan in early May, which will go into effect once several health markers are met, though it’s unclear which phase film studios would fall under. An inquiry to the governor’s office was not returned by press time.

Most industry players are hesitant to wager on a reopening date, though some hoped that filming may resume by late summer or in the fall. On the city’s end, it has halted issuing permits for on-location filming through at least the end of May.

In the meantime, producers are sketching out multiple schedules based on the various potential filming start dates, Rosenbluth said. While there hasn’t been a noticeable change in demand for the number of productions, the shows and films that were underway are anxious to get back to work.

The feeling is particularly acute for producers of streaming content, given a homebound audience is devouring content at a fast clip. (Films, on the other hand, are facing the opposite quandary with theaters shuttered and new releases piling up – though they’re also anxious to restart). And the country’s stay-at-home orders coincided with an uptick in streaming services, with recent launches from Apple and Disney and upcoming launches from NBCUniversal and Warner Media’s HBO.

Many of the changes being considered point to a slower, and hence more costly, pace of production work. Last month, the state extended its tax credit program for filming in New York through 2025, helping to give additional runway to producers.

“The schedule for their product to come in is going to be delayed,” Steiner said. “That’s where their real nervousness is. Going forward, how much more expensive and how much longer it will take to produce product. And that they’re behind schedule to fill their pipeline.”

One likely change involves crews becoming more departmentalized to reduce density, sources said. In pre-coronavirus times, teams of carpenters, painters and set dressers would often be on set together, rushing to get their jobs done. And that might have been mixed with actors rehearsing scenes, and the cameramen and grips setting up gear. Going forward, they’ll likely be broken down into smaller teams that will be granted access to the set one-by-one.

The hair and makeup crews also face a special challenge, given they work in close proximity to the actors. Not to mention the actors’ scenes themselves, where trying to maintain social distancing guidelines could lead to script rewrites, such as a change in setting or a reduction of actors in the scene. It could even throw a wrench into entire storylines.

“How would they handle doing this kind of show, say, ‘Orange is the New Black’?” Rosenbluth said, referencing the popular prison drama where actors film in close quarters. “Do they get released because of the coronavirus? I don’t know.”

The discussions around actors’ safety protocols are expected to be driven by unions such as SAG-AFTRA, while unions like the Teamsters and Local 52 are likely to drive talks for crew members. The industry is also looking to its counterparts in Los Angeles for guidance and collaboration, and the hope is to create some sort of industry standard that would apply across filming locations, executives said.

“We’re working aggressively with our internal experts, with industry safety representatives, and coordinating with other guilds and unions on the issue of safety,” said David White, national executive director at SAG-AFTRA. “No one yet knows when the industry will be able to return to work but we intend to be ready at the earliest possible time while ensuring the safety of our members.”

Given the density of workers and multiple crews filming together on studio lots, sources pointed to the need for adequate COVID-19 testing for a successful return to work.

“I don’t know that the workforce is anxious to get back until there’s testing in place,” Steiner said. “And I don’t know that social distancing alone is going to give people a sufficient peace of mind for that, without testing.”

Access to tests, and finding good markers on when things can be rolled back out, will help influence reopening talks taking place on the city and state levels, del Castillo said. Executives stressed that they would tread carefully on a reopening, to avoid any flare-up in infections.

The testing would be mixed with other safety enhancements like ensuring there’s enough masks and gloves for crew and staff, heightened cleaning of communal areas, and sanitizing things like carpentry tools. Then there’s a number of judgment calls on smaller things like costumes, such as whether they should be rented or not, and if so, how do you sanitize them.

“Right now, you’ve got a lot of a lot of producers on the set but none of them have complete authority,” Ford said. “They’re gonna have to put somebody, one person, who’s in charge and what they say goes.”

New Yorkers may see a drop off in the ubiquitous filming trucks on city streets, with executives predicting a drop off, at least in the short term, in on-location filming. They pointed to difficulty in obtaining permits and the challenges for crews to set up, secure and sanitize the set.

“A lot of shows shoot down at the courts, down on Centre Street, and those are open to the public,” Ford said. “How do you keep people safe there?”

There may be greater demand for studio backlots, with their open-air setting providing more flexibility, Steiner said. Studios also expect to see demand for additional holding areas to serve as crew overflow stations, and for parking lots so that staff can opt to drive to work, sources said.

Looking forward, industry players see the return of the studios as vital to the city’s economic recovery. “Media and tech generally are really important to New York’s economic future,” Steiner said. ”And Albany has to solve it.”

The industry is proving to be an important lifeline for New Yorkers, too.

“The irony is the industry is what’s keeping a lot of people entertained right now,” del Castillo said. “It’s a lifeblood, in many ways, both in terms of jobs and engagement of people during times of crisis.”