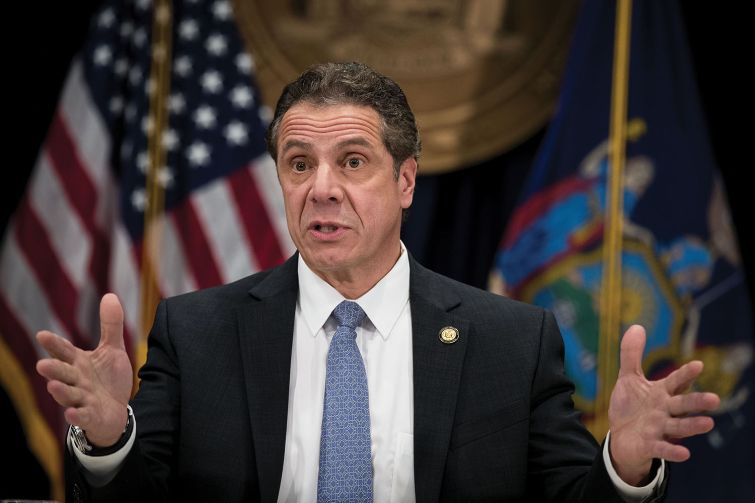 A deadly pandemic that has spread rapidly throughout the nation and brought the economy to a standstill did not disrupt New York State lawmakers from approving a $177 billion budget early Friday.

Governor Andrew Cuomo called the budget’s passage “extraordinary,” despite uncertainty over future contributions from the federal government and a $10 billion drop in tax revenue over the coming months.

“The budget was difficult because the state has no money,” Cuomo said at a press briefing Friday. “How do you do a budget because you can’t forecast revenues? Start with an assumption where we see how much revenue takes place, where expenses are, and calibrate accordingly.”

A bill to impose a 90-day moratorium on collecting residential and commercial rent was not added to the budget and did not gain enough support for a separate vote before April 1. Queens Senator Michael Gianaris, who sponsored the bill, hopes the governor will pass an executive order to avoid mass evictions and foreclosures this summer.

“If someone can’t pay April’s rent they can’t pay April, May, or June’s rent when July rolls around,” Gianaris told Commercial Observer. “People are making real-time decisions about their lives. We need to increase stability and find ways of keeping people inside their homes.”

Building owners, spurred by the Rent Stabilization Association and the Community Housing Improvement Program, flooded lawmakers with calls urging them to oppose the Gianaris bill, several Albany sources said. Landlords instead want the state to offer subsidies for tenants struggling during the pandemic as well as curbing property taxes, mortgages, and water bills, an RSA spokesman said.

“Freezing rental payments across the board would put owners in a precarious position where they won’t be able to pay their tax and water bills, which will not only lead to the deterioration of their already-aging buildings, but ultimately have a domino effect on city coffers and the city economy,” RSA spokesman Vito Signorile told Commercial Observer.

The Real Estate Board of New York, which represents larger commercial owners, pushed for the extension of several tax breaks that could spur economic development in the outer boroughs. Albany lawmakers not only renewed the Relocation and Employment Assistance Program (REAP) for three years, they also extended the Industrial and Commercial Abatement Program (ICAP), which wasn’t due to expire until 2022.

Progressive lawmakers and advocates scrutinized both programs after Amazon tried to utilize them when contemplating putting its second headquarters in Long Island City. REBNY officials called the abatements “hugely important” for encouraging commercial development outside of Manhattan in a downturned economy.

“We’re under a humanitarian and economic crisis right now, we have to have programs like ICAP and REAP to jumpstart the economy when we go back to work,” REBNY senior vice president of planning and policy Paimaan Lodhi told CO. “Land acquisition costs are getting expensive and residential use almost always is the preferred development in the city so you need an incentive program to incentivize commercial development.”

But industry leaders didn’t get everything they wanted. The legislature passed a measure requiring owners pay prevailing wages for workers on partially publicly subsidized development projects that cost over $5 million. That law could have negative consequences on future economic growth, REBNY vice president of policy Zachary Steinberg said.

“Going forward as we are able to come out of our homes and restart the economy we’ll have a lot of unemployed people and a lot of work we have to do,” Steinberg told CO. “We are concerned that the prevailing wage bill is not going to be effective at creating jobs at the scale we want to support.”

Lawmakers handed Cuomo additional powers to cut spending unilaterally if revenues don’t keep up with state forecasts. Few legislators were comfortable with the agreements they reached by the end of the week.

“This budget is a crisis budget,” Senate Finance Committee Chairwoman Liz Krueger said in a statement. “In the face of challenges the likes of which our state and our nation have not faced in generations, we will protect New Yorkers’ health, and stand up for New York students, families, and small businesses. But make no mistake – this budget is not the final word. Far from it.”

The novel coronavirus outbreak has upended the daily lives of New Yorkers in profound ways since the first positive case occurred a month ago. State lawmakers gave Gov. Cuomo expanded emergency powers to issue directives for travel restrictions and quarantines in early March. The mayor and governor have since closed schools, stores, workplaces, and most construction sites and advised the public to remain at home through April while focusing their attention on adding more hospital beds and stockpiling medical supplies. Hundreds of thousands of New Yorkers have lost work in the past month, a sudden bleak economic reality that could force as many as 40 percent of city tenants to skip their rent.

This year’s budget included a hodgepodge of policies, bans, and rollbacks that Cuomo and lawmakers have been deliberating over since January but have little to do with the state’s response to the virus. A bitter debate over adjusting the state’s new bail reform laws simmered for months before lawmakers agreed to allow judges to set bail on a spate of additional low-level offenses. The budget also tightened eligibility rules for elderly and disabled residents to qualify for Medicaid, legalized electronic bikes which delivery workers use, banned flavored e-cigarettes, barred repeat sex offenders from using the subway, and legalized gestational surrogacy.

But the budget was just as notable for what it didn’t include. The widespread availability of recreational marijuana could soothe an anxious public but its legalization will have to wait until next year because legislators and the governor disagreed over its sale and revenue distribution.

There won’t be any relief either for tenants who lost their job or were forced to shutter their business amid the outbreak. The governor already suspended evictions for three months and offered mortgage relief to certain property owners but has not offered any forgiveness for tenants. That’s left underemployed families to make wrenching choices over skipping rent and risking eviction in the future in order to pay for food, medical supplies, utilities and other necessities now.

When asked by the press whether he would consider a moratorium in the future, Cuomo said he already addressed it.

“We have said that no one can get evicted for nonpayment of rent and that to me is the fundamental answer. That solves all of the above,” Cuomo said.

“Andrew Cuomo’s failure or refusal to deal with rent cancellation is making a lot of people scared and anxious and adding to people’s stress levels,” Tenant PAC spokesperson Michael McKee told CO. “For him to say ‘We’ll deal with this when we get there’ is just unacceptable.”