Industrious Makes Reductions to a Third of Its Workforce [Updated] 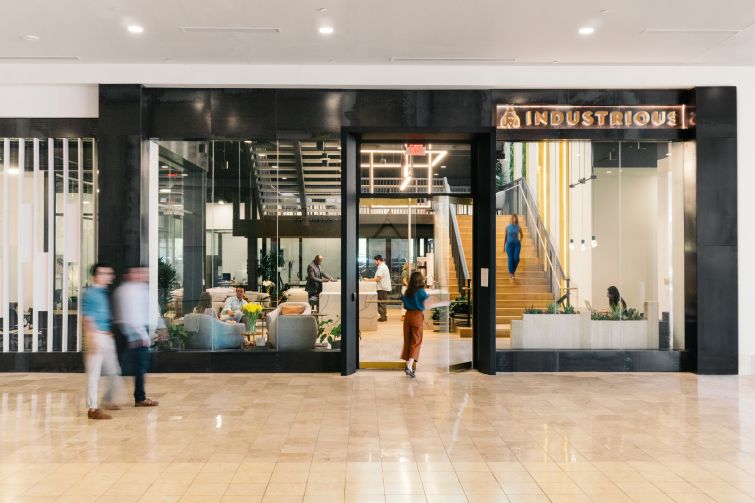 A new report explains how malls could reverse their declining fortunes during the pandemic. The suggestions include leasing to coworking operators, like this Industrious location in Fashion Square in Scottsdale, Ariz. Photo: Industrious

Flex office provider Industrious is cutting back on its payroll through layoffs, reduced hours and pay cuts, as it struggles with the impact of the coronavirus pandemic and economic shutdown.

The company laid off 90 employees, roughly 20 percent of its workforce, and made further reductions to another 10 percent through furloughs or reduced hours, the company confirmed.

The majority of the layoffs affected staff in design, real estate development and finance, activities which Industrious expects to scale back sharply over the foreseeable future, co-founder and CEO Jamie Hodari, told Commercial Observer.

“If you go from signing seven, eight new locations a month to signing two or three, that severely impacts the amount of design work the company has, for example,” Hodari said.

Industrious marks the latest of flex space companies, in both residential and commercial real estate, to dismiss or furlough staff in the wake of the outbreak. Knotel cut half its staff, CO reported, dismissing 30 percent and furloughing 20 percent more while short-term rental unicorn Sonder laid off a third of its staff, and WeWork cut about 250 jobs in March, after months of layoffs.

“The primary focus was how to keep the layoffs as small as they can reasonably me,” Hodari said, as well as lower the impact on the employees, through severance and health coverage.

Laid off employees will receive a month’s severance plus a week for every year they worked at Industrious, three months of extended health coverage, and the company has waived the one-year cliff for stock options, and extended the window in which employees can exercise those  options from 90 days to 18 months.

Senior executives at Industrious will also take a pay cut and Hodari will reduce his salary by 75 percent, Bloomberg first reported.

Industrious operates shared office spaces in 35 markets across the country, either through traditional leases or management contracts.

Hodari said the reductions were based on two factors, the impact the company expects to hit revenue over the course of the next year, and a medium-term shift in strategy. With all their locations closed for the foreseeable future, the company has launched an online platform with a virtual community for each of its locations. ”There is still a lot of work for our customer-facing staff to do,” Hodari said.